Shot dead in Dublin 100 years ago: the man who started the War of Independence

Sean Treacy, one of the most-wanted men in Ireland, was shot on Talbot Street in Dublin

On the 100th anniversary of the killing of Sean Treacy, the rebel who was shot dead on Talbot Street in 1920, the Irish Film Institute has released footage from the scene. Video: Pathe/IFI 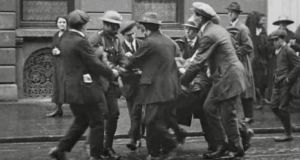 Sean Treacy’s body is moved, as caught by a Pathe film crew in Dublin

On October 14th, 1920 Sean Treacy, one of the most-wanted men in Ireland, was killed by a single shot to the head on Talbot Street in Dublin.

He had died as he had lived, a warrior to his last breath, having survived a gun battle just two days previously that almost killed his good friend and comrade-in-arms Dan Breen.

Treacy was a wanted man and when he exited No 94 Talbot Street with a plan to rescue his friend in the Mater Hospital, then surrounded by Crown forces, he was ambushed by a detachment of British military.

In a fierce gun battle Treacy tried to get away on a bicycle left by his friend Dick McKee, but slipped. Terrified passers-by watched as bullets smashed through shop fronts and lodged in doorways. Lieut Gilbert Arthur Price and two civilians, Joseph Corringham and Patrick Carroll, were also killed.

Treacy and Breen were the men who started the War of Independence. They were not, as has often been believed, the leaders of the ambush at Soloheadbeg on January 21st, 1919 in which two Royal Irish Constabulary officers were killed while escorting a cart of gelignite to Soloheadbeg quarry.

Their commanding officer was Seamus Robinson. However, he believed the shooting of the two constables was an accident. Breen had no such ambivalence. His later statement to the Bureau of Military History explicitly states that he and Treacy intended to kill the two policemen, and it was Treacy, as the more senior officer of the two of them, who suggested it.

“Treacy had stated to me that the only way of starting a war was to kill someone and we wanted to start a war, so we intended to kill some of the police whom we looked upon as the foremost and most important branch of the enemy forces which were holding our country in subjection.”

Treacy and Breen were later involved in the Knocklong ambush in May 1919 to rescue Sean Hogan from a train. Two RIC constables were killed and Treacy was badly wounded. It did not deter his involvement in the attempts in December of that year to kill the Lord Lieutenant Lord French.

Treacy and Breen’s actions made them marked men and Tipperary had, once again, become too hot for them.

Treacy and Breen were involved in a shoot out at a safe house in Drumcondra on October 12th. British forces surrounded the house. In the ensuing gun battle, two British officers were killed along with Prof John Carolan, a Republican sympathiser who had provided the safe house for the two men. Breen received five gunshot wounds and was evacuated to the Mater Hospital.

Treacy got away. It was while attending a meeting at the Republican Outfitters at No 94 that he met his end.

At the time a Pathe news crew were in Dublin filming for the War of Independence and were quickly on the scene. They filmed the removals of the bodies of those who were killed. The footage has been acquired for the State by the Irish Film Institute.

It is a graphic and visceral depiction of the reality of a war which is often romanticised not least as a result of Breen’s bestselling memoir My Fight for Irish Freedom.

Kilmainham Gaol had planned an exhibition to mark the centenary of Treacy’s death. The exhibits include braces and shoes Treacy was wearing at the time, a lock of hair taken from his head and given to his friend Breen and a locket given to Treacy’s fiancée May Quigley.

Unfortunately it has to be postponed because of Covid-19, but Kilmainham Gaol hopes to restage the exhibition whenever it opens.

Meanwhile the exhibits can be seen online at rte.ie.