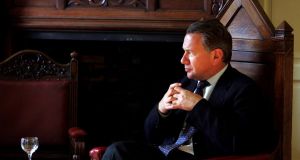 Last year while filming his new documentary about the War of Independence, former British defence secretary Michael Portillo found himself alone at the monument to the Clonmult ambush which occurred in February 1921.

The spot in east Cork near Midleton marks the worst reverse for the IRA in the war when 14 volunteers were shot dead after being surrounded by British forces while hiding out in a farmhouse. The suspicion remains to this day that at least five of them were shot after surrendering.

He expected the woman of the house who maintained the monument to be suspicious of a former Tory cabinet minister. Instead, she emerged and told him with a cake in hand: “I’ve baked you a lemon drizzle.”

Hawks and Doves: Ireland’s War of Independence is Portillo’s second foray into the fraught world (for an outsider and a Briton) of Irish history.

Portillo said he is constantly amazed in travelling around Ireland at the magnanimity shown to him as a former British politician about Irish history, about Irish knowledge of Britain and the knowledge ordinary Irish people display about their history in contrast to his own country.

“Ignorance of Ireland among the British is rather shocking, I’m afraid. It is a theme that occurs again and again,” he says.

“What happened 100 years ago appears to be highly relevant to a large number of people in Ireland perhaps even a majority. There is a huge difference between how the Irish regard their history and how the British are engaged by their history. The British are really engaged by only one thing - the second World War.”

Before he became a politician, Portillo gained a first class degree in history from Cambridge University, but he freely concedes that he, like the vast majority of British people, knew little about this period of Irish history.

“I’m sorry to plead ignorance as some kind of virtue, but I think one of the things they (the producers) wanted me to do as a presenter is to use my relative ignorance and my experience as a cabinet minister to look over the documents and try to put myself in the mind of the people who were writing these documents,” he says.

British political ignorance of Ireland extended even to the peace talks which ended in the Belfast Agreement.

Former Downing Street chief of staff Jonathan Powell said he and British prime minister Tony Blair were “pretty ignorant” of the history of Ireland, but turned it into a virtue.

“If we knew how much history had been freighted into this, we might never have tried to resolve Northern Ireland. Luckily the blessing of ignorance allowed us to try,” Powell tells Portillo in the documentary.

Hawks and Doves is dedicated to the late UCD professor of history Ronan Fanning and draws heavily on his book, Fatal Path, a masterful study of British policy in relation to Ireland between the years 1912 and 1922.

The book and documentary accurately chronicle the indifference and indecisiveness which caused the UK to lose most of Ireland just three years after being on the winning side in a world war.

The documentary is set in the post-war context: British prime minister David Lloyd George has abdicated responsibility for domestic affairs and is too busy reordering the world at the Paris peace conference to pay attention to what is happening in Ireland.

“As far as the British are concerned, Ireland is an awful distraction,” Portillo says.

“The British are always dealing with Ireland I’m afraid in this ignorant, off-hand way. The policies are driven forward by the one or two people in the cabinet who have given the matter any thought at all, but they have given it from a unionist point of view.”

The hawks in Portillo’s documentary are the Irish administration fronted by Walter Long, the first lord of the admiralty and unionist chair of the parliamentary committee on Ireland, the lord lieutenant field marshal Sir John French, who saw himself as the head of a “quasi-military government” and the chief secretary of Ireland Ian MacPherson, who spent most of his time in London.

In 1919 they proscribed every major nationalist organisation; the Dáil; Sinn Féin; the GAA; and the Gaelic League. It did not stop the sporadic violence. Indeed, it emboldened the IRA into going into all-out war, burning RIC barracks in early 1920.

In March 1920 the British prime minister David Lloyd George sent his permanent secretary to the treasury, Warren Fisher, to Ireland to report back. His observations, as recounted in the documentary by Portillo, could hardly be more damning.

“The government of Ireland strikes one as almost woodenly stupid and quite devoid of imagination. It listens solely to the ascendency party and it never seemed to think of the utility of keeping in close touch with opinions of all kinds. The phrase Sinn Féin is a shibboleth with which everyone not a loyalist is denounced.”

Portillo, who has seen a few government memos in his time, said he had never seen “anything as frank or as damning as Warren Fisher’s minute”.

It led to a change in the Dublin Castle administration which was more amenable to the reality that the IRA’s campaign was more than an outbreak of lawlessness, but expressed a desire on the part of nationalist Ireland for independence.

Still, though, the killings continued. The arrival of the Black and Tans and Auxiliaries has been well documented and the War of Independence ended up being a tit-for-tat affair.

The tacitly sanctioned reprisals by the British government as evidence by the sacking of Balbriggan in September 1920 and the burning of Cork in December of that year that did as much damage as the IRA to British prospects, Portillo believes.

The absence of discipline within British forces forfeited the advantages they had in terms of men and munition.

“It is perfectly evident that this is terrible for the British as pointed out by the Labour Party, the Church of England, the British Empire heads of government and it poisons the relation with the United States. That point eventually sinks into Churchill. One of the most remarkable changes is in Churchill’s position.”

The documentary expertly chronicles the lost opportunity to end the war early when Archbishop Patrick Clune, as a British government intermediary, put out peace feelers to the IRA in late 1920, but the British demanded that the IRA disarm first, amounting to a surrender, and it foundered. The costs of this failure were terrible. The bloodiest six months of the war lay ahead.

Portillo identifies king George V’s speech at the opening of the Northern Ireland parliament in June 1921 as the critical factor that would lead to the Truce three weeks later and eventually the Anglo-Irish Treaty.

The British king’s famous speech in which he appealed to all Irishmen “to pause, to stretch out the hand of forbearance and conciliation, to forgive and to forget, and to join in making for the land which they love a new era of peace, contentment, and goodwill” went well beyond the usual monarchical platitudes. It is, Portillo opines, “the most content-laden speech I have ever seen from a monarch”.

Portillo says the dichotomy between hawks and doves was one he wrestled with himself. He was first elected to parliament in December 1984 at a byelection occasioned by the death of Anthony Berry who was killed in the Brighton hotel bombing. Portillo says he sat in the same car that Airey Neave was blown up in by the INLA in 1979 and Ian Gow, who was assassinated by the IRA in 1990, was a personal friend of his.

Nevertheless, he supported prime minister John Major’s attempts to open a dialogue with Sinn Féin. “I was on the Northern Ireland committee, when it came up, I was not opposed to it,” he recalls.

“John Major did not have a close relationship, but I would pay tribute to him for that. It was terribly difficult for us that we had all lost friends to the IRA.

“Oddly enough Labour did not have any casualties. We would have found it difficult as the Conservatives to go all the way in the peace process, but at least we started it.”

Portillo completes the two-part documentary by positing the question as to whether or not the War of Independence was necessary to secure Irish independence. It’s a genuine question, he stresses, in the context of the Civil War which followed, to which he is not positing a definitive answer.

Portillo, whose republican father fled Spain at the end of the Spanish Civil War, says he hopes to make a third film on the Irish Civil War to complete a trilogy of films.

Hawks and Doves: Ireland’s War of Independence is on RTÉ One on Wednesday at 9.35pm.