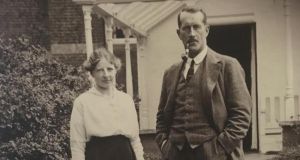 General Lucas with his wife Joan aka Poppy: The IRA captured the general while he and two other British army officers were fishing on the river Blackwater in Co Cork.

It is the War of Independence story like no other. The British general captured by the IRA during a day’s fishing on Blackwater, who later became friends with his captors over tennis and croquet, whiskey and the saving of the hay.

One hundred years ago next week, the IRA captured Brig Gen Cuthbert Lucas while he and two other British army officers were fishing on the river Blackwater in Co Cork.

Letters between husband and wife (the ones to him addressed only as c/o the IRA), along with Lucas’s secret captivity diary, have now been digitised and made available online on Thursday by his granddaughter Ruth Wheeler.

The abduction of the senior British general – who led the garrison at nearby Fermoy – on June 26th, 1920, made international headlines, leaving then secretary of state for war Winston Churchill “purple with rage”.

Lucas was captured alongside two of his staff officers. Lucas spoke the Arabic he had learned on colonial service to urge his colleagues to overpower their kidnappers. They did.

One was badly injured, and the other was left by the IRA at the side of the road to care for his wounded comrade. For 34 days, Lucas was spirited across Limerick and Clare, while the British army scoured the land.

What happened next demonstrated that humanity and humour can co-exist even amidst the ancient enmities which existed during the War of Independence.

Lucas and his captors struck up a rapport. He exercised by playing tennis, croquet and saving the hay. As a prisoner of war, he insisted on having a bottle of whiskey.

One of his captors, Michael Brennan, who went on to become chief-of-staff in the Free State army, recalled: “He was an expensive luxury as he drank a bottle of whiskey every day which I hated like hell to pay for.”

Two of his other captors went on to have high-profile careers afterwards. Liam Lynch became the leading anti-Treaty general in the Civil War and was killed in 1923.

Seán Moylan went on to serve as a cabinet minister in later Fianna Fáil governments, holding the posts of minister for agriculture, minister for education and minister for lands. He died suddenly in 1957.

Lucas played bridge with his captors until 2am. They were amazed at his skill in dealing despite him having lost two fingers in the first World War. Even more extraordinarily, he wrote to – and received letters from – his pregnant wife, Joan.

Better known as Poppy or Pip, she was so alarmed when she heard about his kidnapping that she went into premature labour. The couple’s first child was born while Lucas was in captivity.

In one, he wrote: “I expect you have heard by now, I have been taken prisoner,” he writes to his wife. “Well, old thing, you are not to worry. I am being well looked after and well treated, but very bored.

“I’m afraid I shan’t be with you when the event [the birth of their first child, Bill] takes place, but don’t worry as I really am alright.”

She wrote back, addressing her letters c/o The IRA. They always reached their destination.

Wheeler first brought the letters to public attention last year on the BBC’s Antiques Roadshow. They were valued then at £5,000, but she insists that she has no intention of selling them.

“The important thing is to share a wonderful true story which brings out some of the best in humanity,” she says, “Soldiers from different sides of a bitter conflict, staying loyal to their callings.

“Yet they enjoyed together games of croquet and tennis; salmon poaching; card games, and of course a whiskey, along with a lot of good humour and mutual respect.

“None of these men, including Lucas, were saints and many will have strong views about the sides they represented. However, at least for this short period of their lives, they displayed qualities that we all can celebrate.”

On July 30th, Lucas was facilitated by his kidnappers to escape. His captors had concluded that he was preventing them from carrying out other operations and they had made their point.

Even then Lucas’s adventure did not end. He was picked up by soldiers in a Crossley Tender which was involved a few minutes later in the Oola ambush which led to the deaths of two Black and Tans.

Lucas later went public to declare that he had been “treated like a gentleman by gentlemen”, a remark which did not go down well with the British military establishment.

The letters, Wheeler hopes, will contribute to greater Anglo-Irish understanding.

“I am so passionate about the story because it is so amazing,” she says.

The letters and diaries can be viewed at chtl.co.uk