Newgrange digs are expected to reveal an ‘extraordinary’ find 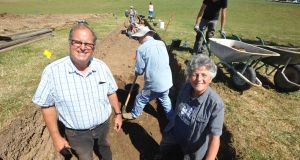 The first research excavations at Newgrange, Co Meath in more than 30 years have begun, after a geophysical survey showed what could prove to be an “extraordinary monument”.

The find at the world heritage site has been described as “the most definite, complex and ordered feature ever seen in a geophysical survey in Ireland”, according to DCU medieval historian and archaeologist Dr Matthew Stout who is leading the dig with his wife, Boyne Valley archaeologist Dr Geraldine Stout.

The four-week excavations began last week and it may be another week before the team of 18 archaeologists uncover anything of real significance. “It was a lot deeper than we expected, about a metre down,” Dr Matthew Stout said.

A survey conducted in 2015 by geophysicist Joanna Leigh, to investigate the feasibility of renovating the old tourist office at Newgrange, clearly identified the substantial site at the back of Newgrange Farm.

It suggested numerous large pits, forming two parallel sets extending over 75m, indicating an ancient processional way to Newgrange. The entrance way and perpendicular pits form a passage or corridor, which ends precisely due south of the entrance to Newgrange passage tomb. “It is a huge monument,” said Dr Stout, suggesting “a Neolithic communal routeway”.

Ms Leigh has speculated that the site is associated with the passage tombs and is ritual in nature. “It’s the most impressive geophysical underground site that I’ve ever seen,” said Dr Stout after the first week of excavations. “It shows four even rows of pits and ditches and is an extraordinary feature.”

It’s the first set of excavations since the 1980s at Newgrange and has been funded with a grant from the Royal Irish Academy with the support of the Redhouse family land owners, the OPW, DCU and Notre Dame University in the US.

The Darkness Echoing: How the past is politicised and marketed
7