Emigrants who got State pensions . . . and sometimes lost them 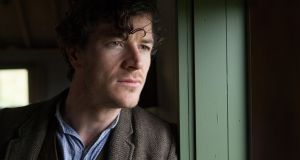 From Ken Loach’s Jimmy’s Hall (2014), a film based on the true story of Jimmy Gralton, the only man ever deported from Ireland.

In 1943 the Minister of Pensions received a letter from a German prisoner of war camp franked with a swastika.

The letter was from William Coman, a captured British soldier, who was incarcerated in a prisoner of war camp in Berlin.

“I am wrighting (sic) to notify you that I am a prisoner of war,” he stated. “I will have to leave my money with you until the war is over.”

Coman was also a serving British soldier when he became involved in the Connaught Rangers mutiny in India in 1920. Three Irish-born soldiers were killed and 14 were sentenced to death though their sentences were later commuted for their part in an insurrection in part due to the behaviour of the Black and Tans in Ireland.

Others, including Coman, received long sentences – in his case 15 years. He was released under general amnesty in 1923.

The mutineers were denied a military pension by the British government. In 1936 the Irish government intervened and passed the Connaught Rangers (Pensions) Act. It granted them State pensions.

He got his pension back despite having re-enlisted in the British army, but forfeited it in 1956 when he stole a bicycle worth £12 in Galway. He later had his pension restored after several people pleaded that he was mentally ill and destitute.

Coman was one of thousands of applicants for a pension or service medal from overseas. Many of the revolutionary generation left Ireland after independence. Some left for political reasons, usually those involved in the anti-Treaty side during the Civil War or known republicans in Northern Ireland. More though left for economic reasons.

In his revised edition of Leitrim’s Republican Story which includes the nominal rolls released in 2014, author Cormac Ó Súilleabháin lists 3,000 men from the county in the IRA at the Truce of 1921. By 1935, 479 had emigrated to the United States and Canada and a further 40 went to Britain, almost one-in-five of those still alive at the time.

Among those who had been in the IRA and were living in the US at the time were Jimmy Gralton, the only man ever deported from Ireland who inspired the film and stage play Jimmy’s Hall. Another was Michael Judge, father of the 9/11 priest Fr Mychal Judge, and Phil Fitzpatrick, who wrote the song Lovely Leitrim and was gunned down while serving with the New York Police Department in 1947.

Several famous anti-Treaty Republicans applied for a pension while living abroad. They included Dan Breen, who spent years running a speakeasy in Chicago and the author Ernie O’Malley who listed his address as the Hotel Victoria in New York.

A more infamous pension applicant who emigrated to the United States was Malachy McCourt, the father of Angela’s Ashes author Frank McCourt. He was portrayed in the bestselling book as “the shiftless, loquacious alcoholic father” and a parody of the drunken Irish rebel, rousing his children out of bed to sing Kevin Barry and Roddy McCorley.

Malachy McCourt’s application for a pension was turned down.

Almost 2,000 veterans of the revolutionary period applied for a service medal from the United States, 1,400 from Britain, 76 from Australia, 51 from Canada and 16 from Australia.

Millions of people around the world have a connection to those listed in the pension and brigade activity reports files. Former England international footballer Peter Reid’s grandfather, Patrick Reid, was one of the youngest of those involved in the Easter Rising. He was just 15 at the time and received a pension in 1938 while living in Liverpool.

Singer Boy George’s great-uncle Thomas Bryan was one of the “forgotten 10” executed by the British during the War of Independence. His wife was granted a pension of £90 a year for her husband’s service and the State paid for her funeral when she died in 1930 at the age of 30.

Comedian Paul Merton’s grandfather James Power is listed in the brigade activity reports as a first lieutenant in B Company (Passage East) of the 3rd battalion, East Waterford Brigade. He had been a British soldier in the first World War who returned his medals and joined the IRA. He drowned in Wales following a heart attack in 1927 and is listed as RIP in the Passage East records.