About the military archives

A vast array of records are stored in the facility, which has over 21km of shelving 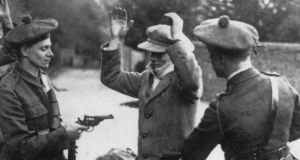 A suspected member of Sinn Féin is searched by Black and Tans during the War of Independence. Photograph: Topical Press Agency/Hulton Archive/Getty Images

Since its first online release of records in 2014, the Military Service Pensions Collection (MSPC) project has provided unprecedented public access and historical insight into Ireland’s struggle for independence. These files are considered the jewel in the crown of the military archives, and have been the ones that have been most consistently and prominently in the public eye during the Decade of Centenaries.

The MSPC is processed by its own dedicated team, headed by project manager Cecile Gordon, and overseen by an interdepartmental steering group. While it is the most well known collection, the MSPC forms just part of the wider documentary evidence in the custody of the military archives.

The role of the military archives is to acquire, preserve and make available Ireland’s documentary military heritage. The archive is located at Cathal Brugha Barracks, Rathmines, Dublin, and is the official place of deposit for all records of the Defence Forces, Department of Defence, and Army Pensions Board.

The military archives is located in a purpose-build facility opened in 2016 as one of the government’s “permanent reminders” – legacy capital projects marking the centenary of the 1916 Rising.

While the military archives has only been at its present site for a few years, the history of the archives in one form or other can be traced back as far as 1922, with prominent individuals involved in its early years including Piaras Béaslaí and J.J. “Ginger” O’Connell.

The military archives facility holds a vast array of records in its repository which contains over 21 linear kilometres of shelving. These include the records of the Bureau of Military History, Department of Defence records from 1922 onward, the Collins papers, Civil War-captured documents, Civil War operations and intelligence reports, emergency defence plans, and records of Irish military service with the United Nations.

As well as State records, the military archives holds over one thousand private collections, including the Brother Allen Collection, donated to the military archives in 2016 as a gift to the State by the Christian Brothers of O’Connell School, Dublin, and the Collins-Powell Private Collection, containing material relating to Michael Collins, deposited by his descendants.

Records at the Military archives may be accessed at the Commandant Peter Young Reading Room, which is open to the public by appointment. Details of which can be found on our website at www.militaryarchives.ie

Commdt Daniel Ayiotis is officer-in-charge of the military archives.