A century on: how partition divided Ireland and why it still matters 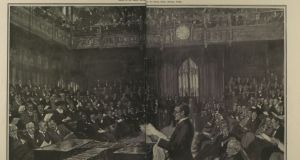 With the foundation of Northern Ireland in May 1921, the partition of Ireland became a reality. It was in 1920, though, that the type of partition Ireland experienced was mainly formulated.

Throughout 1920, the Government of Ireland Bill, officially partitioning Ireland, was debated in the Houses of Commons and Lords, before being enacted by King George V on December 23rd.

The sectarian violence that engulfed the North from its inception started in the summer of 1920, continuing in waves for much of the following two years.

The leading Ulster unionist James Craig also won two major concessions from the British government in September 1920 that gave partition tangible form even before the Government of Ireland Act became law: the establishment of an Ulster Special Constabulary just for the area that would become Northern Ireland and the appointment of an Assistant Under-Secretary for the same area, Sir Ernest Clark.

The main provision of the Government of Ireland Bill was to create distinct legislatures for Ulster and the southern provinces linked by a common Council of Ireland, comprising 20 representatives from each parliament.

This was the first time that a British government proposed a separate parliament for Ulster.

By offering nationalists far less than they demanded and Ulster unionists far more than they sought, the Bill was clearly an attempt to solve the Ulster question, and not the Irish question.

The Irish Times, while acknowledging the “thoroughness and ingenuity” of the Bill, claimed there was one main objection, a radical objection: “there is not the remotest possibility of it becoming effective”, particularly in the south. It was “like an imposing battleship whose builders have remembered everything except the fact that their country has no sea”.

With Sinn Féin in the ascendancy in the south and west of Ireland, the British government knew the Bill was unenforceable outside of Ulster. The Bill was drafted and amended to accommodate Ulster unionists.

The primary complaint from Ulster unionists was on the area to be included in the Ulster parliament. They sought the six counties of Antrim, Armagh, Derry, Down, Fermanagh and Tyrone, and not the nine counties of Ulster as this was the maximum area they felt they could dominate without being ‘outbred’ by Catholics.

This decision was deeply unpopular among the 70,000 Protestants of counties Donegal, Cavan and Monaghan who were sacrificed to the southern administration.

James Craig, who became Northern Ireland’s first prime minister in 1921, even suggested the establishment of a Boundary Commission to examine the border area for northern and southern Ireland to avoid the jurisdiction of the northern parliament extending over the whole of Ulster.

Subsequently, he emphatically opposed the ‘odious’ Boundary Commission established under the Anglo-Irish Treaty of December 1921. By that stage he had his northern “citadel” which he intended to sit on “like a rock”.

The British government agreed to accede to the Ulster unionists’ wishes to confine the northern parliament to six counties only in February 1920, just as the Bill was being brought to the House of Commons.

The British government’s argument in favour of a nine-county parliament was that it would help towards Irish unity, something Ulster unionists had no desire to achieve.

Even though they endorsed the Government of Ireland Bill reluctantly, many Ulster unionists eventually concluded the Bill would cause the “least diminution of their Britishness”. It was a choice of the lesser of two evils.

Ulster Unionist leader Edward Carson denounced “the whole policy of Home Rule for Ireland”, saying the desertion of Protestants in the south “cuts me to the quick”, but the reality was that there was ‘no alternative to the Union unless separation’. He did not “look upon a Parliament in Ulster as altogether without a ray of sunshine”.

As the Government of Ireland Bill was making its way through parliament in 1920, tensions in Ulster started to boil over. Waves of violence, most of it sectarian in nature, engulfed the northeast from the summer of 1920 to the summer of 1922, leading to the violent deaths of about 550 people.

Violence that started in Derry city soon moved further east. Following the returning from the Twelfth of July holiday on July 21st, 1920, calls were made for the expulsion of all ‘non-loyal’ workers from the Belfast shipyards. Straight afterwards, a mob went on a rampage looking for potential victims. Some were stripped to their undergarments in a search for Catholic emblems such as rosary beads.

Many were severely beaten. Catholics were soon expelled from many other companies in Belfast. It is estimated a total of 10,000 men and 1,000 women workers were expelled, about 10 per cent of the nationalist population of Belfast. Protestant socialists, known as “rotten Prods”, were also expelled from their jobs. The unrest travelled from the workplace to the streets of Belfast, resulting in 19 dead and many more wounded or homeless within five days. For the next two years, similar waves of violence hit the North, amplifying the sectarian divide that was the North’s most defining characteristic.

Even though most of the violence was perpetrated against Catholics, Craig demanded that an Ulster special constabulary, whose membership was formed from the nucleus of the Ulster Volunteer Force (UVF), be established to just serve for the area that would become Northern Ireland.

Even though the British government recognised it could be accused of “taking sides and ceasing to govern impartially”, it granted Craig his special constabulary. Unionists looked to police themselves partly as they did not trust the Royal Irish Constabulary (RIC).

The Ulster Special Constabulary came into existence on November 1st, 1920, the same day that Kevin Barry was executed, the first person to be executed in Ireland since the 1916 Easter Rising. The Specials had an initial strength of 3,000 with its members organised into three classes.

The ‘A’ class were full-time uniformed police auxiliaries, the ‘B’ group were employed on a part-time basis and allowed to keep their weapons at home, whilst the ‘C’ class, the largest group, were only to be called out for emergencies such as invasions.

While officially, northern Catholics were allowed to join the force, few did or were actively encouraged to do so. Right from the beginning, northern nationalists saw the Specials as a purely Protestant force.

It was unusual for the British government to grant a devolved region control over a paramilitary police force, strikingly so in 1920, as the entity of Northern Ireland had not even come into existence.

Craig also won the support of the British government in securing the appointment of an assistant under-secretary, Sir Ernest Clark, with responsibility just for the area that would make up Northern Ireland, and again before the Government of Ireland Bill was enacted in December 1920.

His work as assistant under-secretary was crucial in creating the structures of a functioning government for Northern Ireland when it came into being in the summer of 1921.

Future Northern Ireland prime minister Basil Brooke described him as “midwife to the new Province of Ulster”. Clark, supported by a small team of no more than 20, worked tirelessly from his appointment in September 1920 to set up the machinery of a new jurisdiction with very little to work with, as he testified: ‘I found myself . . . setting out to form a new “administration” armed only with a table, a chair and an Act of Parliament.’

The year 1920 also saw Sinn Féin making one of its first decisions directly related to the North. Dáil Éireann started a boycott ‘of goods from Belfast and a withdrawal of funds from Belfast-based banks’ in response to the expulsions of Catholic workers from Belfast shipyards and elsewhere. In reality the boycott soon extended to other businesses and farming and beyond Belfast too.

Many saw it as an anti-partitionist move, a way to show that the North could not survive without the rest of Ireland. In reality, the boycott increased the likelihood of partition. Its economic effects to hamper trade in Belfast met with mixed results, but the boycott’s aim to unify Ireland was an unmitigated disaster. It resulted in further psychological and physical divisions between North and South, some that had never existed before.

It was in this hostile atmosphere that the Government of Ireland Bill became an act on December 23rd, 1920. In assenting to the Act, King George V expressed hope that the Act, “the fruit of more than thirty years of ceaseless controversy, will finally bring about unity and friendship between all the peoples of my Kingdom”.

Based on the events and actions of 1920, this was a wildly optimistic reading of the environment in Ireland and of the likely fallout from its impending partition.

Cormac Moore is an historian-in-residence with Dublin City Council and is author of Birth of the Border: The Impact of Partition in Ireland.

Cormac will deliver a talk – 1920: Countdown to Partition – at the Dublin Festival of History on Saturday, October 3rd, at 2pm.

The Dublin Festival of History, a Dublin City Council, event runs until Monday, 5th October. All events are free to attend, and places can be booked on the festival website.