A guide to historical happenings around the country this year 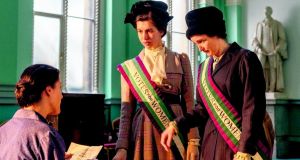 May-Sepember: Citizenship Exhibition: The Houses of the Oireachtas, in partnership with the National Museum of Ireland, Ireland, are hosting an exhibition of artefacts, images and ephemera celebrating the work of the suffragette movement, the importance of the Representation of the People Act 1918, and their impact on modern society. Houses of the Oireachtas -May-September - Adults

June 8th-9th: 2nd Annual Irish Military Seminar: Liz Gillis will speak on the theme of women in the struggle for Irish freedom and Neil Richardson will speak about the significance of Irish involvement in the First World War. Riverbank Arts Centre, Newbridge, Co Kildare

From June 30th: Fortnightly Sligo night walking tour will include how the county coped with the 1918 flu epidemic.

August 12th-16th: The Parnell School will examine the 1918 British general election in Ireland and its legacy. There will be various talks on the theme of democracy in Ireland. Avondale House, Co Wicklow.

August 17th-19th: The West Cork History Festival will include talks by Alvin Jackson the author of Judging Redmond and Carson. Among the speakers on the theme of 1918 will be Professor John Horne, Professor Eunan O’Halpin, Professor Louise Ryan and Dr Ida Milne. Rosebank, Skibbereen, Co Cork.

August 31st-2nd: The History Hedge School will host a seminar on 1918 at the Electric Picnic. Stradbally, Co Laois. Time TBC

September 2018: The National Museum of Ireland - Country Life in Castlebar will mark the centenary of the Spanish Flu in Ireland with a public programme of events titled The Enemy Within - the Spanish Flu in Ireland 1918-19. A temporary exhibition detailing the folk medicines and rudimentary cures used by the public to combat the flu will be on display in the Museum of Country Life, Co. Mayo from September 2018 to April 2019. An illustrated lecture series detailing the local impact of the Spanish Flu will be delivered in sixteen venues across fifteen counties between September 2018 to June 2019. National Museum of Ireland - Country Life, Turlough Park, Castlebar, Mayo.

September 7th-9th: Friends of Sligo Gaol have organised a bicentennial weekend to remember the opening of the jail and the centenary of Michael Collins’ incarceration there in 1918.

September 24th - October 7th: The Dublin Festival of History (various venues). The festival will discuss the Representation of the People Act 1918, the centenary of the execution of the Romanov family and a new film, Keepers of the Flame, by Nuala O’Connor featuring stories from the Irish Military Service Pensions archive.

October 10th: An official commemoration will take place in Dún Laoghaire to mark the centenary of the sinking of the Royal Mail Steamer (RMS) Leinster and to remember all of those who perished in that tragedy. The programme will comprise a significant cultural element as well as a formal commemoration and wreath-laying ceremony, with participation by members of the Defence Forces. This is also the date on which the vessel will come under the protection of the National Monuments Acts, which covers all shipwrecks over 100 years old. Time TBC.

November 9th-10th: The Newspaper and Periodical History Forum of Ireland’s (NPHFI) 2018 annual conference will be held at NUI Galway 9-10 November. The theme will be ‘The Press and the Vote’ which will examine the impact of the press on the 1918 general election.

November 11th: Armistice Day. All official State commemorations marking the end of the first World War and the British general election of 1918 will be announced at a later date. See the website of the Department of Culture, Heritage and the Gaeltacht for further details.

November 11th: Remembrance: The Eleventh Hour: Unveiling of a First World War memorial at Áras Chill Dara, Devoy Park, Naas at 11am followed by the launch of Remembrance: The Kildare War Dead 1914-1918 and civic reception at the Osprey Hotel in Naas.

December 2018: Date TBC: RTÉ will broadcast Election 1918 which will be a mockumentary of the events surrounding the 1918 election with studio guests and period count centres. It will be hosted by RTÉ broadcaster and historian David McCullough. It’s a Loosehorse Productions.

Terry Jones, Monty Python star, dies at the age of 77
4