In St James’s hospital, coffins were stacked up to 18-high in the mortuary

The Spanish flu pandemic of 1918 devastated Ireland – with more than 20,000 deaths and 800,000 infected, it permeated every layer of society and silenced whole communities as it passed through 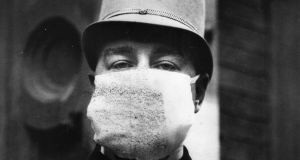 An American policeman wears a ‘Flu Mask’ to protect himself from the outbreak of Spanish flu following the first World War. Photograph: Topical Press Agency/Getty Images

When a major new epidemic of disease appeared in east Ulster and north Leinster in the early summer of 1918, Irish newspapers initially flagged it as a “mystery disease”, resembling “neumonic plague”, but soon settled on a diagnosis of out-of-season influenza.

It was not unexpected: recent wars had brought smallpox and other diseases to civilian populations. The British War Office was keeping a keen eye on disease emerging from such a large and brutal war, but this disease was first reported from Spain, a country not involved in the war, and therefore was named the “Spanish flu”.

By the time the stories of the illness of King Alfonso XIII of Spain and several thousand of his courtiers appeared, the French, US, British and German armies had already been depleted by influenza. Wartime censorship prevented these stories appearing on newsprint – neither side wanted to alert the other to its weakness.

We now know this was the largest influenza pandemic the world has ever known, killing at least 50 million people, and infecting somewhere between one fifth and half of the world’s then population of two billion.

We can’t be more precise than this, as death certification was rudimentary in many countries. In Ireland, the official death certification to influenza in 1918 and 1919 was 20,057, which places it on a scale with the cholera pandemics of the 19th century.

But doctors who were obliged to certify the deaths were so busy treating the living it is likely, as the Local Government Board suggested, that the actual toll was higher. Many deaths went uncertified, or were attributed to bronchitis and other causes than influenza. From the available statistics, medical statistician Dr Anthony Kinsella and I have estimated the number of Irish who caught the flu in 1918 and 1919 at about 800,000, or about one fifth of the population.

The pandemic severely disrupted the work of the Paris Peace Conference called to work out a lasting peace, as delegation after delegation fell prey over several months, including the three leaders, David Lloyd George, Georges Clemenceau and Woodrow Wilson.

Lloyd George was felled by it on a visit to Manchester in September 1918; he came close to dying, and was still debilitated when he travelled to Paris for the negotiations. It is beyond the playground of speculation to imagine what might have happened to the Anglo-Irish treaty had Lloyd George succumbed to the flu in 1918. Clemenceau too caught it. Woodrow Wilson spent a long time confined to his quarters with the disease, inaccessible to all except his closest aides; some think the flu made him paranoid for a time.

It came here in three waves – the first in east Ulster and north Leinster, down roughly as far as Dublin in the first wave in the early summer of 1918, The second wave came in October 1918, this time affecting Dublin and the rest of Leinster most acutely.

The final wave lasted from February until April 1919, again affecting Dublin, Leinster, and moving further westwards. Donegal was very badly affected throughout the entire influenza period; the use of Lough Swilly as a naval base during the war, and the treatment of sick soldiers and sailors in local hospitals played a role in making Donegal an influenza blackspot.

Other blackspots included the port towns of Dundalk, Howth and New Ross, the city of Belfast and Naas, where illness amongst the gas company staff, water shortages and the open pail sewage removal made nursing sufferers particularly difficult. At the beginning of November, each of these towns had more than 1,000 people confined to bed with the disease. Co Clare’s death toll was the lowest in the country; perhaps the infamous inefficiencies of the West Clare railway saved it.

The Spanish influenza pandemic, with its devastating death toll and even more astounding numbers of sufferers, silenced whole communities as it passed through. This influenza permeated every layer of society, from family life to economics and politics. Schools, libraries and other public buildings were closed, court cases adjourned, for some weeks. Football and hurling matches – including the All-Ireland finals – and concerts were postponed or cancelled. People who were not ill stayed at home for fear of catching the disease.

Families of the anti-conscription campaigners interned in Wales and England wrote to the newspapers of their fears for their loved ones’ lives if the flu came to their institution. One, Richard Coleman of Swords, died from influenza in Usk, Wales, on December 9th, just days before the pivotal general election on December 14th, and Sinn Féin swiftly moved to adorn election posters with black crepe to mark his death.

Many families were flattened, incapable of doing anything except struggling to live; often they failed in that struggle in a dramatic manner, presenting a pathetic tableau to would-be rescuers who broke down doors to find entire families either dead or beyond help, sometimes all dying in the one bed.

In its edition of February 26th, 1919, The Irish Times covered the inquest of Mrs Frances Phelan (27) who lived with her husband, child and sister-in-law on Corporation Street, Dublin. Neighbours, noticing the Phelans had not been seen for some time, broke into their rooms and found Mrs Phelan dead in the bed, with her husband, infant son and sister-in-law also lying on the bed, seriously ill.

The caretaker of Corporation Buildings, John Maguire, said he found the four occupants of the room in one bed, the baby with a comforter in its mouth. He tried to rouse the man and helped him to dress. The second woman was partly dressed. He wrapped a coat about her, placed her on a chair, and sent a message to the police.

The three were removed to Dublin Union Hospital by ambulance, but did not recover. Sad stories like these, of multiple deaths in families, were documented by newspapers from most parts of the country, and are also evident on tombstones.

The numbers of ill overwhelmed hospitals; Dublin’s Mater Hospital converted almost all its wards to handle influenza patients. So did the Adelaide, and the Dublin Union Hospital, now St James, where witnesses said coffins were stacked up to 18-high in the mortuary.

The Poor Law system, whose dispensary doctors looked after about 70 per cent of the population, was taxed beyond its limits. Many doctors were still away at war, so when the Poor Law doctors caught the disease, it was almost impossible to get replacements.

Dr HJ Rafferty, the medical officer of health for Bray number one district, appealed to the Rathdown Board of Guardians for help on October 16th, as he had 600 influenza patients during the week. The previous Saturday, Dr Rafferty had visited 74 houses, in all 300 cases of influenza, with six or eight people in each house requiring attention.

A rough calculation shows us that if Rafferty worked 18 hours that day, he would have averaged 16 patients and four households an hour, a phenomenal work rate, but one that is supported by other evidence as not being all that unusual during the pandemic.

Doctors did what they could; many of them paid a high price for trying to mind their patients, dying as a result. Community kitchens were set up in Naas, Dundalk and other areas, bringing soups and stews to those too ill to cook for themselves. Neighbours helped neighbours, nursing and feeding the ill.

In this pre-antibiotic era, there was no cure for the pneumonias that often came as a complication of influenza, and over-the-counter medications to control the fever were not common like the ibuprofen and paracetamol of today.

Even though many doctors – including Kathleen Lynn – administered vaccines, it quickly became evident the vaccines had little effect, unsurprisingly as contemporary medicine understood influenza to be caused by bacteria rather than a virus. Doctors threw everything in their professional bag at it: quinine to treat the fever, opium to promote sleep, copious quantities of whiskey and brandy to relief the symptoms, and calomel – mercurous chloride – to open the bowels, a contemporary concern of doctors.

In some Poor Law unions, the boards of guardians objected to the administering of alcohol to patients, and doctors felt obliged instead to inject the seriously ill with strychnine, a stimulant. Other treatments bizarre to our contemporary eyes included gargles with tinctures of creosote, and injections of camphor in oil. The one thing all agreed was that the best guarantee of survival was good nursing, with plenty of liquids like gruel or beef tea during the ill phase, and nutritious meals during convalescence.

Dr Ida Milne is Irish Research Council Marie Curie Elevate fellow at Maynooth University. Stacking the Coffins, Influenza, War and Revolution in Ireland 1918-19 will be published by Manchester University Press in May 2018