The attack on the mail and passenger ship by German torpedoes in October 1918 killed 565 people . . . yet it largely forgotten 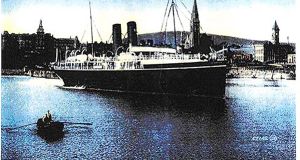 ‘RMS Leinster’: its sinking made headlines around the world.

The sinking of the RMS Leinster by a German submarine in October 1918 resulted in the greatest ever loss of life in the Irish Sea and the highest ever casualty rate on an Irish-owned ship. It jeopardised attempts to end the first World War. Yet it is an event about which few Irish people have heard.

Between 1850 and 1920, the City of Dublin Steam Packet Company (CDSPCo) operated a mail and passenger service between Dún Laoghaire (then Kingstown) and Holyhead, Wales.

Having the post office contract to carry mail across the Irish Sea, the four ships covering the route carried the prefix RMS, for Royal Mail Steamer. Nicknamed the “Provinces”, they were named RMS Connaught, RMS Leinster, RMS Munster and RMS Ulster.

Each ship had an onboard mail sorting room, staffed by members of Dublin Post Office. Irish post for Britain was put aboard trains at Westland Row (now Pearse Street) railway station, from where it was sent to Dún Laoghaire (then Kingstown). British post for Ireland was sent by rail from London to Holyhead. At both ports the post was put aboard the mailboats.

From the start of the first World War, the Royal Navy blockaded the North Sea, Germany’s ocean access to the outside world. The country faced starvation and defeat unless the blockade could be broken or the German army could achieve military victory.

German submarines avoided the blockade by sailing beneath the surface of the ocean. They attacked merchant shipping bringing food and supplies to Britain, in an attempt to starve Britain into surrender. However, faced with protests by neutral America following the sinking of the RMS Lusitania in 1915, Germany suspended her unrestricted attacks on merchant shipping. Putting to sea in 1916, the German navy failed, at the Battle of Jutland, to break the British blockade.

In 1917, in a desperate attempt to win the war, Germany resumed unrestricted attacks on merchant shipping. As a counter measure, the British sailed merchant ships across the Atlantic in convoys escorted by the Royal Navy. America entered the war in April 1917. In late 1917, faced with the difficulty of attacking escorted convoys, the Germans focused their attacks on the waters around Great Britain and Ireland, where shipping tended not to be convoyed.

During the first World War, the Provinces continued their Irish Sea service. Each was painted in camouflage and a gun was placed in the stern, manned by a Royal Naval gun-crew – a useless defence against submarine attack.

In 1915, the Admiralty requisitioned the RMS Connaught. For almost two years, it was used to transport troops and equipment from Southampton to Le Harve. On March 3rd, 1917, it was torpedoed and sunk in the English Channel with the loss of three crewmen. From late 1917, the remaining Provinces were attacked a number of times by German submarines, but they managed to avoid being sunk or damaged.

The Germans used three types of submarine in the first World War: the U-boat for longer voyages into the Atlantic; the UB-boat for operations around Britain and Ireland; and the UC-boat for minelaying operations. In late September 1918, UB-123 set out from Germany, bound for the Irish Sea.

The war was in its final month. Thousands of Irish men and women were serving in Britain’s armed forces. The British and Americans had a number of airfields in Ireland. A large American and British naval force was based in Co Cork.

There were smaller British naval forces at other ports, including Kingstown. Shortly before 9 am on October 10th, 1918, the RMS Leinster left Kingstown, under the command of Captain William Birch, a Dubliner who lived with his family in Holyhead.

The weather was fine, but the sea was rough following recent storms. Aboard the ship were crew from Kingstown and Holyhead, 22 postal sorters, civilians from Ireland and Britain and soldiers, sailors, airmen and nurses from Ireland, Britain, Australia, New Zealand, Canada and the United States.

Shortly before 10 am, a torpedo fired by UB-123 from the port (left) side missed the ship, passing across its bow. A second torpedo struck the ship on the port side, in the vicinity of the mail room. Attempting to turn, the ship was struck on the starboard side by another torpedo. It quickly sank.

Survivors struggled in the rough sea, in lifeboats and clinging to life-rafts and wreckage. Royal Naval ships which rescued survivors included the armed yacht Helga, which had shelled the centre of Dublin during the Rising two years previously.

The dead included Captain Birch, 21 of the 22 postal sorters aboard, Josephine Carr (19) from Cork, the first ever Wren (Women’s Royal Naval Service) to be killed on active service and six members of the Gould family from Limerick. Current research shows 565 were lost in the sinking. They came from Ireland, Britain, Australia, New Zealand, Canada, the United States, France and Guernsey. UB-123 was lost in a minefield with its entire crew while attempting to return to Germany.

On October 14th 1918, US President Woodrow Wilson sent a harsh reply to German peace overtures which included the phrase: “At the very moment that the German Government approaches the Government of the United States with proposals of peace, its submarines are engaged in sinking passengers ships at sea . . .”

Soon afterwards, Germany ceased its attacks on merchant shipping. An armistice was signed on November 11th.

For a short time, the RMS Leinster held centre stage as attempts were made to end the first World War. Its sinking captured headlines around the world. But in the 100 years since it occurred, Ireland has forgotten about the sinking. Hopefully, the forthcoming centenary commemorations will go some way towards rectifying this amazing act of amnesia.

Philip Lecane is a member of the library staff of the National Maritime Museum. He is the author of Torpedoed! The RMS Leinster Disaster. See website www.rmsleinster.com for information on plans to mark the RMS Leinster centenary