‘Timidly opening the doors’ : Winning the vote for women in 1918 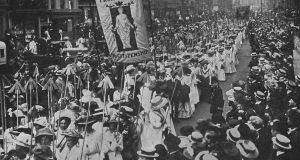 Women on a suffrage march carry 617 arrows, each representing a conviction of a suffragette. Photograph: Mansell/Time Life Pictures/Getty Images

The Irish suffrage movement, with a membership of about 3,000, was made up of nationalist, unionist and those who refused to take either side. It was as determined as its British counterpart to win votes for women. Irish women had an additional goal – to ensure women were included in any measure of Irish self-government that might come before parliament. In this they faced opposition from the Irish Parliamentary Party and hostility from the leaders of both main parties in Ireland –John Redmond for the nationalists and Sir Edward Carson for the unionists. Both men were determined opponents of feminists.

After elections in 1910, the Irish Party held the balance of power in the House of Commons, keeping a minority Liberal Party in power. The price was a promise from prime minister HH Asquith that his government would bring in a Bill for Irish Home Rule. Asquith was hostile to women’s suffrage and Redmond exerted his power to ensure his colleagues did not act in any way that might antagonise the prime minister.

For that reason, when Home Rule considerations conflicted with Bills aimed at giving women the vote, Irish MPs voted against. Their withdrawal of support for women was dramatic. In 1911, 31 members of the Irish Party supported an all-party Conciliation Bill on suffrage. In March 1912, when a revised Bill came before the House with a good chance of success, not one member of the party voted in favour. Only William O’Brien, Tim Healy and James Gilhooley of the O’Brienite faction of nationalists continued their support. “The Irish Party killed the Conciliation Bill,” was the cry of British and Irish suffragists. Their justification was that if the Conciliation Bill had passed, it would limit the time available for discussion on the Home Rule Bill.

Less than two weeks later, the Home Rule Bill was presented to the House of Commons. Women would not have a vote in Home Rule Ireland. By June, with all appeals from suffragists ignored, the militants of the Irish Women’s Franchise League decided the “limits of constitutionalism” had been reached. Eight women smashed windows in Dublin Castle, the GPO and the Custom House, becoming the first suffrage campaigners to go to prison in Ireland.

Philip Snowden, Labour MP, attempted to introduce an amendment to include women’s suffrage within the Home Rule Bill. The government put the whips on MPs and his measure was lost by 173 votes. The first acts of suffrage militancy in Ulster were committed in November 1912, following this vote.

In May 1913, Liberal MP Willoughby Dickinson’s ‘Representation of the People Bill’, which would have enfranchised six million women, was lost by 47 votes – and 54 nationalists voted against it. Irish suffragette Geraldine Manning was fined 25 shillings for daubing green paint across a bust of John Redmond on display in the Royal Hibernian Academy.

Outbreak of the Great War

That was the last attempt to give women the vote before the outbreak of the Great War in August 1914. In Ireland, there had been 35 suffrage arrests and many hunger strikes. In addition, 18 Irish women served sentences in Holloway Prison because of their participation in suffrage militancy in England.

As the war continued and a coalition government was formed, parliamentarians became concerned that electoral registers were out of date and when the war ended, reform would be needed to ensure men in the armed forces were eligible to vote. A cross-party conference was set up in October 1916 to look at issues relating to franchise reform. Women’s suffrage was far down the list of topics, but suffrage campaigners continued to press their demand. Politicians admitted that public opinion had changed, but many were concerned that women would form a majority of the electorate. The Speaker’s Conference suggested the vote be restricted to women over the age of 30 or 35, leaving parliament to make the final decision.

On June 19th, 1917, the House of Commons debated clause 4 – ‘franchises-women’, as part of the Representation of the People Act, agreeing to give the vote to women over 30 who were entitled to be registered as a local government elector. It passed by a majority of 385 votes to 55.

Sir Edward Carson was amongst the no camp, but Ulster Unionist James Craig voted yes. Prominent nationalists Joe Devlin, John Dillon and Tim Healy all voted yes, and no nationalist opposed the clause. John Redmond was not present. His brother Willie, a strong supporter of women, had been killed on June 7th while fighting in France. As Redmond had informed suffrage deputations that he did not favour a Home Rule parliament giving women the vote, he would have been an unlikely supporter.

When the Representation of the People Bill was being debated, suffragist Lucy Kingston said of him that “antagonism to woman suffrage seems to have been inextricably melted into Mr John Redmond’s system by some malign fairy”.

The only Irish MP to speak on women’s suffrage was Tim Healy, who spoke out strongly against adding a property qualification to women’s eligibility for the vote. On June 20th, 1917, Healy argued: “Why should we have a property franchise? Is it to be laid down that a woman of means is to have a vote while the poor woman is not to have one? That was the rock upon which the Conciliation Bill split.” He returned to this question on January 31st, 1918, stating that the qualification of a £5 yearly value regarding rental property would help to create a “new aristocracy” amongst female voters.

The women’s suffrage measure was far from revolutionary. It was supported by many Conservatives, who recognised the age restriction and property qualification would serve to limit eligibility regarding those who might have had radical views. It did not reward those who engaged in war work, many of whom were under 30 and living at home or in rented rooms. Domestic servants were not eligible. On January 8th, 1918, the House of Lords accepted women’s suffrage by 134 -71 and on February 6th the Bill passed the final stages in the Commons and received the royal assent.

Hanna Sheehy-Skeffington, who had served two terms of imprisonment during the suffrage years, and who had later taken part in the Easter Rising, contrasted this measure with the promise of equal suffrage to all Irish citizens that had been given in the Proclamation two years previously: “We Irishwomen have the interesting contrast before us of an Irish Republic giving full and free citizenship to all adults, men and women, and a British parliament timidly opening its doors to British women over thirty.”

On November 12th, 1918, the non-militant suffrage group, the Irishwomen’s Suffrage and Local Government Association, changed its name to the Irishwomen’s Citizens’ and Local Government Association. Anna Haslam, its founder, had put her name to the first suffrage petition, presented to the House of Commons by JS Mill in 1866. At the age of 90, she survived to vote in the December 1918 election, where she cast her vote for Sir Maurice Dockrell, a Conservative.

Other leading campaigners in the Rathmines constituency cast their votes for different candidates – Mary Kettle and Mary Hayden for the Irish party nominee, Hanna Sheehy-Skeffington for Sinn Féin. All candidates, despite their political differences, were suffrage supporters. The young women of Cumann na mBan, emboldened by the Proclamation, were now pledged to ensure that women took up their proper role in the life of the nation. Many were too young to vote, but they were enthusiastic campaigners for Sinn Féin. Together with the Franchise League, they worked to ensure the imprisoned Constance Markievicz became the first woman to be victorious in the Westminster election.

Representation Of the People Act (1918)

The Representation of the People Act (1918) became law on February 6th, 1918. It gave all men over the age of 21 the vote and all women over the age of 30 who met certain property qualifications. It tripled the electorate in Britain and Ireland from 7.5 million to 21.4 million. The expanded franchise grew out of the first World War and the anomaly that so many men fighting in the trenches were denied the vote at home. The Act also recognised the long campaign for female suffrage and the increased responsibilities women had in the British war effort.

Dr Margaret Ward is honorary senior lecturer at the School of History, Anthropology, Philosophy and Politics in Queen’s University Belfast