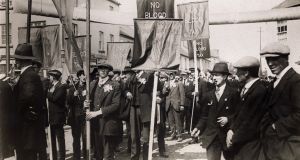 The meeting in Ballaghaderreen to protest against the extension of conscription to Ireland on May 5th, 1918, was addressed by Éamon de Valera and Irish Parliamentary Party leader John Dillon. Photograph: George Rinhart/Corbis via Getty Images

January 8th US president Woodrow Wilson sets out his “14 points for peace” in a speech to Congress. He outlines the possible contours of a post-war settlement.

January 23rd Robert Gregory, the son of Lord Gregory and the inspiration for a number of WB Yeats’s poems including An Irish Airman Foresees His Death, is killed when his Sopwith Camel goes into a spin and crashes in Italy.

February 6th The Representation of the People Act (1918) becomes the law in Britain and Ireland. Women are given the vote for the first time, albeit only those over the age of 30 who have a property qualification. All men over 21 are also given the vote irrespective of means. These moves tripled the electorate.

February 11th Woodrow Wilson explains that his 14 points means “national aspirations must be respected; people may now be dominated and governed only by their own consent. Self-determination is not a mere phrase; it is an imperative principle of action.” This phrase was seized upon by many Irish nationalists seeking an independent Irish Republic.

March 3rd: The new Bolshevik government of Soviet Russia and the Central Powers sign a treaty at Brest-Litovsk. The Bolsheviks are forced to give up large swathes of territory and an independent Ukraine is recognised. The treaty was short-lived and declared null and void after the armistice of 1918.

March 11th: The first reported strain of a new and deadly flu virus is reported at a military base in Kansas. The Spanish Flu, as it became known, will become a deadly pandemic which will kill more people than the first World War.

March 21st: The Germans being their Spring Offensive designed to win the war before the United States enter it in force. The 16th (Irish) Division bears the brunt of the Kaiserschlacht (Kaiser’s battle) or Operation Michael as the Germans call it. There is mass panic in the British ranks as the Germans overrun their lines.

April 6th: The Military Service (No.2) Act is passed by the House of Commons. It makes provision for conscription to be introduced into Ireland, precipitating the Conscription crisis.

April 12th: British commander-in-chief Field Marshal Sir Douglas Haig issues his famous “with our backs to the wall” decree urging his men to resist the German Spring Offensive. The German advance is checked just outside the strategically critical French town of Amiens.

April 18th: A conference is held in the Mansion House to form an Irish Anti-Conscription Committee composed of all shades of nationalist opinion in Ireland in opposition to conscription.

April 21st: Catholic bishops issue an edict at Sunday Masses urging all Irish people to “resist conscription by the most effective means at our disposal”.

April 23rd: A general strike is held across Ireland against the Conscription Act.

May 5th: The new Irish Parliamentary Party leader John Dillon and and Éamon de Valera share a platform in Ballaghaderreen against conscription.

May 16th-17th: Dozens of Sinn Féin leaders, among them Éamon de Valera, Arthur Griffith, WT Cosgrave and Constance Markievicz are arrested by the British authorities on a spurious charge that they were plotting with Germany against Britain. It became known as the German plot.

May 27th: Germany makes another attempt to win the war, launching the Third Battle of the Aisne. Again they have early success and get within 50km (35 miles) of Paris, closer than they had done in 1914, but once again the Allies counter-attack and force them back.

July 17th: Czar Nicholas II and his family are executed by the Bolsheviks.

August 8th: British forces launch an “all-arms” offensive against the German army. Using artillery, planes, tanks and rapidly moving infantry, the British army rout the Germans. German chief-of-staff General Erich Ludendorff calls it the “black day of the German Army” . The 100-day offensive which will end the war by the Allies has begun.

October 10th: German submarine U-471 sinks the RMS Leinster off the Kish lighthouse. The sinking causes an international outrage.

October 14th: Wilson calls off peace talks. He says he will only deal with a democratic and not imperial Germany.

November 3rd: Austria-Hungary signs the armistice with Italy, ending its involvement in the first World War.

November 11th: German officers sign armistice terms in a railway carriage in the Forest of Compiègne. Hostilities cease at 11am.

November 14th: British prime minister David Lloyd George announces a general election for December 14th, the first since 1910, and with the extended electorate.

December 14th: British general election held. It becomes known as the Khaki election as millions of British soldiers are still overseas. As a consequence the results are delayed for two weeks.