The Irish labour movement’s leading role in the campaign proved a pyrrhic victory, creating internal tensions within trade unions and drawing hostility from their British counterparts 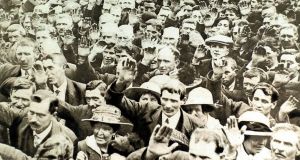 The anti-conscription campaign was arguably nationalist Ireland’s most complete, and bloodless, victory over British imperialism in the 20th century. The labour movement played a leading role in the campaign but ended up as one of the greatest losers. This paradoxical outcome was largely determined by its ambivalence towards Irish independence. While Irish and British unions were divided on the question of Home Rule, they were united in opposition to Partition.

A general strike against conscription was held on April 23rd, 1918. Practically every enterprise except government offices closed outside of Belfast, where many Catholic workers were told they would have no jobs to return to if they went out. Rallies were held in 59 towns and villages ranging from large centres such as Dublin, Cork, Limerick and Derry, to villages such as Collooney and Killtullaght.

An estimated two million people, men and women, signed the anti-conscription pledge and on Lá na mBan, June 9th, thousands of women signed a further pledge not to take the jobs of men conscripted.

In Britain 1.5 million women undertook jobs in transport, factories and offices to release men to the front but the prospect of this vital resource was withheld in Ireland. All but three of the rallies were presided over by priests, who administered the anti-conscription pledge. A meeting planned by Archbishop Walsh for senior clergy to discuss how best to counter the spread of “anarchism, republicanism and Bolshevism” that day had to be abandoned because they were too busy celebrating special Masses for trade unionists.

When the Irish Labour Party and Trade Union Congress (ILP&TUC) adopted a programme in the aftermath of the Easter Rising, its first objective was that it remained “resolutely opposed [to]any attempt to exclude Ulster – or any part of Ulster – from the rest of Ireland”. Secondly it declared, “our determined antagonism to Conscription and solemnly affirm our intention, to quote the words of the Ulster Covenant, ‘of using all means which may be found necessary to defeat the present conspiracy’ to extend the Military Service Act to Ireland”. Only then did it deal with more traditional industrial, social and economic issues. David Dawson of the Belfast-based Flax Roughers and Yard Spinners Trade Union complained that both of the clauses on partition and conscription “might . . . have been made a little stronger”

The conscription crisis of April 1918 not only revealed the latent tensions within the ILP&TUC but also in its relations with the British labour movement, just as clearly as it did between the Irish Party and the British government. Arthur Henderson, leader of the British Labour Party and a member of the War Cabinet, had often received complaints from the ILP&TUC about the preferential treatment it gave to the Irish Party. “We try as far as we can to do our work without coming into conflict with the National spirit of your Country,” he told PT Daly, secretary of the ILP&TUC, “but it is not easy. With all the desire in the world to assist you it is unfortunate that as yet no Labour representative has been elected, so as to prove to us that the Nationalist Members no longer represent the working classes. The Nationalist Party cannot be ignored so long as they are in the House of Commons, and I must say we have no intention of doing other than continue to work with them . . . until the working classes of Ireland send Labour Members to Parliament.”

At local level, British trade unionists were often as resentful as anyone else at what they regarded as the Irish shirking their share of the war burden. A Beech, secretary of the local Leather Workers Union in Walsall told ILP&TUC president Bill O’Brien he was “grieved to receive” his letter seeking support for the anti-conscription campaign in Ireland. Of his members, “Forty-two of a total of 123 . . . are fighting at the Front, some have been wounded, three have paid the sacrifice; and you ask the remainder to pass a resolution condemning the action of conscripting you. I should not like to get you insulted by putting your proposition to them.”

Jabez Chaplin, secretary of the Amalgamated Hosiery Union in Leicester, told O’Brien, “I have been all my life and still am a supporter of Home Rule for Ireland. But I take an opposite view altogether from you about Conscription, while you need the assistance – and you do – of British people to protect your Country – while our lads have to go, yours ought too – without Conscription. England before now would have been overrun by the German Devils, and Ireland would have suffered the same. It is most childish to compare your country with Belgium. What I think ought to be done is to give Ireland Home Rule . . . and I think you should fight it out among yourselves.”

Writing from London, Jim Connell, author of the Red Flag, told O’Brien that even radical Independent Labour Party audiences were reacting with hostility to the anti-conscription movement. After one meeting in Dulwich he wrote: “If you hear one of these days that I have been lynched you must not feel surprised.”

It was not until the German Plot arrests of Sinn Féin leaders in May that the attitude of many British trade unionists began to change. Of course, by then, the imminent prospect of a German victory had receded.

Unfortunately, the damage to internal ILP&TUC relations was more permanent. Ironically, the very first rally against conscription was organised in Belfast by Thomas Johnson and David Campbell, who represented the city on the ILP&TUC executive. That was at the Custom House on April 14th, before the Military Service Bill even became law, but when they tried to repeat the exercise three days later at City Hall, the meeting was broken up by loyalist shipyard workers and Johnson was sacked by his employers for “disloyalty”. He migrated south where he became secretary of the Mansion House Committee against conscription, before resuming his career in the Labour movement that eventually saw him become its leader in the Free State Dáil.

Meanwhile, his successor as president of the ILP&TUC, Bill O’Brien, had become one of the main architects of the Mansion House Committee, throwing in the lot of Labour with the Irish Volunteers, Sinn Féin, the Irish Party, All for Ireland party and the Catholic Church. This transformed the anti-conscription campaign, in the eyes of many northern trade unionists, into a pan-nationalist or even pan-Catholic movement. Subsequently, the general strike of April 23rd, 1918, received the blessing of the bishops, not to mention William Martin Murphy’s Irish Independent, although the latter insisted on calling it a “national holiday”.

On the other hand, Labour did secure the adoption by the Mansion House Committee of all of its proposals for the anti-conscription Plan of Action – except for the first, which demanded the “Withdrawal of Bank deposits by Merchants, farmers, shopkeepers, clergy and all classes”. This was further than a nation of property owners was prepared to go.

Union tensions soon manifested themselves. The Irish Women Workers Union rejected proposals from the National Federation of Women Workers for co-operation because the latter was “controlled from headquarters in England”. Leading NFWW activists such as Margaret Buckley defected to Cumann na mBan.

When the ILP&TUC gathered in Waterford during August, recriminations continued. David Campbell and another Belfast member of the executive, JH Bennett of the Seamen’s Union, were attacked for refusing to sign the declaration against conscription. Campbell said he refused to sign because, “There is no fear of conscription. My opinion is that it is less likely to come now than ever.” The circular issued by the executive was “unduly alarmist”.

Bennett said: “I am against conscription, and I am a Trade Unionist. I refused to sign because I thought the Executive were allowing themselves to be used for political purposes.” The issue rankled enough for the main debate to continue behind closed doors.

At the end of 1918, when the ILP&TUC decided not to contest the general election, the injunction was ignored in Belfast. The general strike proved a pyrrhic victory.

In January and May 1916, the British government introduced conscription into Britain through the Military Services Act. It made all men living in Britain between the ages of 18 and 41 liable to conscription except in certain defined circumstances. Ireland was exempt from conscription. Irish nationalist opinion successfully argued that the historical circumstances of the Act of Union meant the Irish could never be conscripted into the British armed forces. That changed when the German Spring Offensive almost succeeded and exposed a desperate shortage of British manpower. The Military Service (No 2) Act, 1918, introduced conscription in Ireland and expanded the age limit for conscription across Britain and Ireland to 51. It was never implemented in Ireland and the desperate need for manpower ceased after the German Spring Offensive ran out of steam.

Padraig Yeates is an author and historian whose books include A City in Wartime: Dublin 1914-1918