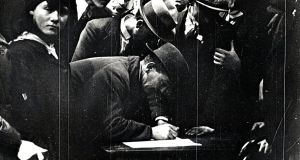 A queue outside a church to sign the anti-conscription pledge in 1918.

On April 9th, 1918, House of Commons MPs gathered for a special sitting. At 3pm, British prime minister David Lloyd George briefed the house on the situation along the Western Front in the wake of the colossal assault that had recently fallen upon British armies in the Picardy region.

Conceived by Field Marshall Erich von Ludendorff, the offensive had swallowed and shattered British units standing in its path, including the two Irish divisions, the 16th and the 36th. Although Ludendorff had already terminated the offensive on April 5th, Lloyd George and his cabinet colleagues were panicked by the speed of the German advance, as well as the catastrophic scale of the breach in the Allied line, and resolved to use all means at their disposal to furnish their beleaguered armies with the reinforcements needed to drive the Germans back. The object of their attention would be Ireland.

Lloyd George addressed the Commons with a note of foreboding: “We have entered the most critical phase of this terrible war. There is a lull in the storm, but the hurricane is not over . . . the fate of the empire, the fate of Europe, and the fate of liberty throughout the world, may depend on the success with which the very last of these attacks is resisted and countered.” After providing a lengthy outline of the course of the campaign, underlining the gravity of events and the importance of additional manpower, the prime minister asked leave to introduce a motion to extend the Military Service Bill, 1916, to Ireland.

Almost drowned out by cries of indignation from Irish Parliamentary Party members, led by Joseph Devlin and Alfred Byrne, Lloyd George persisted: “When an emergency has arisen, which makes it necessary to put men of 50 and boys of 18 into the Army in the fight for liberty and independence . . . I am perfectly certain it is not possible to justify any longer the exclusion of Ireland.”

To this, the newly-appointed IPP leader, John Dillon, bellowed: “You will not get any men from Ireland by compulsion – not a man!” However, the perfidious Welshman had equipped himself enough to do damage to Dillon’s position. He prevaricated by arguing the IPP leadership had supported Britain’s entry into the war for the sake of fellow Catholic nations, Belgium and Poland, which, in Redmond’s words, were “subjected to the intolerable military despotism of Germany”. Lloyd George argued: “Ireland, through its representatives, assented to the war, voted for the war, supported the war. The Irish representatives, and Ireland, through its representatives, without a dissentient voice, committed the empire to this war. They are fully as responsible for it as any part of the United Kingdom. ”

Additionally, Lloyd George reasoned there was another crisis which now needed to be addressed through conscription – the degraded state of the Irish regiments of the British army. “Irish battalions and divisions,” he stated, “have maintained the high honour and repute of their native land. But those battalions are sadly depleted, and they are now filled, or half filled, with Englishmen.”

For the purpose of bringing the Irish regimental battalions up to full strength with the necessary compliment of Irish recruits, Lloyd George declared his intention to extend the Military Service Act to Ireland on the same conditions as those in Britain.

This was a particularly menacing proposition, and the voices of protesting IPP members now grew to a deafening din. “That is a declaration of war against Ireland,” William O’Brien exclaimed. The prime minister then countered with a proposal to invite the house to pass a simultaneous measure for self-government in Ireland; Lloyd George reasoned this should be the carrot to accompany the stick. It did not have the intended effect, but, rather, soured the Irish MPs further. “You can keep it! You can keep both!” yelled Alfie Byrne.

The former prime minister, Herbert Asquith, then intervened to deliver a clumsy and poorly-constructed lecture on the regrettable importance of “making Amiens, and all that Amiens means to Great Britain and to France” the primary focus of their attention through “a supreme and sustained effort”. His speech was met with a dull resentful silence; no Irish MP interjected. Afterwards, Joe Devlin moved to adjourn. What followed during the long evening session that preceded the vote was a series of remonstrances delivered by the IPP leadership. Devlin stated: “You want to conscript Ireland because you poisoned the national life of the country by the methods by which you handled the question of voluntary recruiting.” He then delivered a fateful warning. “Those whom the Gods intend to destroy, they first make mad, and you will be mad if you enforce conscription in Ireland!”

Captain Stephen Gwynn, after defending the honour of his countrymen from an accusation of cowardice by an independent member and having signed up himself to fight, regretted the report from the Irish Convention, upon which he had laboured for nearly a year, was little more than “waste paper” now that conscription had been proposed.

The leader of the IPP, John Dillon, was the strongest in his condemnation. He accused the prime minister of dangling conscription over Ireland “like the sword of Damocles”, thus destroying any hope for a peaceful settlement of the Irish Question. Dillon concluded: “In the long history of the fatuous mistakes which have cursed the connection between these two countries, and embittered our race, in the long history of the blunders which have destroyed the good feeling in Ireland . . . nothing has been done more silly, more unthinkable, more unworthy, than the proposal which we are now considering.”

JP Farrell, a Dillonite stalwart, reinforced his leader’s remarks with a tribute to the late Redmond: “I think the way in which our late lamented leader, Mr Redmond, was treated during his life, and is even being treated after his death, is a shocking commentary on any dealings whatsoever by Irishmen with the British Government. ”

Perhaps the most interesting contribution that evening was the speech delivered by the Unionist leader, Sir Edward Carson, who rose just before the house divided. He had silently observed the proceedings with unease. The realisation that he was witnessing the demise of the old opposition made plain a painful reality; revolution and partition were now inevitable. He regretted that the government were now mixing the conscription issue with the question of Home Rule. “Conscription for Ireland,” he argued, “is either right or wrong. If it be right, it is not propped up by Home Rule. If it be wrong, it is no longer propped up by Home Rule. I warn the government that they may be raising two agitations – one against conscription and a second in regard to Home Rule.”

The ayes in favour were 299, against 80 noes. After nearly nine gruelling hours, the Bill was ordered and the house adjourned. What might have been going through the minds of the Irish parliamentarians as they wandered sheepishly through the corridors of Westminster Palace, on their way to their public houses, hostels or to Euston Station to take the night mail to Holyhead? Was it the long anti-conscription campaign that now lay ahead of them? Was it the grim prognosis for their political survival in the coming general election?

Perhaps it was more what was left behind, than what lay ahead. Their party had suffered a death blow from a government they had supported through four long years of war. Redmond’s legacy was in tatters, and the objective of Home Rule now appeared insignificant. Revolution, whether by politics or violence, seemed the only course that any committed Irish nationalist could adopt, and Britain, in its effort to secure victory on the Western Front, had lost the battle for Ireland.

On May 16th 1918, 72 of the most senior people in Sinn Féin were arrested and deported overnight to England. These included Sinn Féin president Éamon de Valera, WT Cosgrave, the first leader of the new State and the party’s other two elected MPs, George Noble Plunkett and Joe McGuinness. They were suspected by the British authorities of planning a revolt with the Germans.

The catalyst for the deportations was the arrest of Joseph Dowling, a member of Casement’s Brigade. He had been one of 56 prisoners-of-war recruited by the Germans in Limburg to fight against the British. He was captured on April 12th, 1918, after he had been put ashore by a German U-boat. The British authorities feared Sinn Féin was plotting another armed rebellion with Germany. There was no basis for the claim and no evidence was produced. The plot proved to be a propaganda boon for Sinn Féin. Many of its leaders were elected in December 1918 while still in jail and missed the commencement of the first Dáil in January 1919. They were all released in February 1919.

Dr Joseph Quinn is a lecturer and academic tutor at the School of History in UCD. He is writing a biography of the Irish Party MP JP Farrell who was his great-great grandfather

Who will win the International Dublin Literary Award 2020
7

Terence MacSwiney and the hunger strike that made world headlines
9