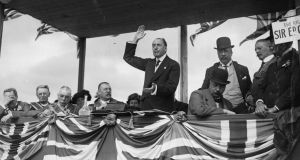 The year 1918 has for long been seen as a critical turning point in the emergence of the Irish revolution. Constitutional nationalism continued its retreat into the shadows, a regress marked by the passing of John Redmond on March 6th, 1918, and by the wider failure of the Irish Convention (1917-18) – the constitutional assembly where he had invested the last of his tactical skill and energy. In the end, Redmondism had been rejected not only by Sinn Féin and the Ulster Unionists, but by the bulk of a divided Irish Party; and indeed Redmond himself was already preparing to hand over its leadership in the days before his surgery and death.

The advance of the new order was further perceptible both in the party’s subsequent acknowledgement of the Sinn Féin lead on abstention (John Dillon, the Party’s new leader, led a temporary walk-out from the Commons) and – more clearly – on conscription.

But it was, of course, the result of the general election of December 1918 which incontrovertibly signalled the extent of the metamorphosis which had taken place within Irish nationalism.

However, as a narrative of Irish history in 1918, all this is lacking, since – at worst – it has nothing to say about the north of the island, or – at best – assumes the usual embittered stasis of Northern politics applies. The reality is different, however. And, in fact, what happened – or what did not happen – in the North in 1918 had both clear implications for the island as a whole, and embodied its own regional sea change.

Northern nationalism, for example, on the whole pursued a different trajectory to the rest of the island. Here, in Ulster, the Irish Party survived, thanks in part to an electoral pact with Sinn Féin (supervised by Cardinal Michael Logue and designed to prevent seats falling unnecessarily to unionists). This deal makes it hard to calibrate the underlying condition of Ulster nationalism, and historians have taken different views; but the indications are that loyalty to the old Irish Party tradition remained relatively robust, though more markedly in eastern Ulster than in the south or west of the province.

As with support for the Redmonds in Waterford, so there was a further personal inflection to this regional survival: in Belfast it certainly owed much to the robust and charismatic leadership of Joe Devlin, a lieutenant of Dillon and at this time the long-standing MP for West Belfast (1906-18). Devlin’s Northern Irish Party also held onto both a key press outlet – the Irish News – and an organisational base, the Ancient Order of Hibernians, while the party elsewhere on the island was losing out both in terms of control over the news as well as a much more rapidly crumbling institutional structure.

When the election came, in December, five of the Irish Party’s six seats were in Devlin’s northern fiefdom, with ‘wee Joe’ himself easily seeing off a challenge from Éamon de Valera in his home turf of Belfast Falls (winning 8,488 votes to De Valera’s 3,245). Depressed about the Party’s condition, and ailing, Devlin had in fact chosen – controversially – to concentrate his formidable political talents on the task of shoring up its support in the North, while its national fate was left to those, like Dillon, with less strategic sense and tactical flair.

The problem for Northern nationalists after 1918 was not, therefore, that they had no voice in the Commons and over the developing politics of self-government and partition: it was rather that their voice was so weak, and that it was disembodied from the main corpus of Irish separatist nationalism.

The year 1918 was also in many ways a zone of transition for Irish unionism, no less than for the Irish Party and Sinn Féin. Above all, however, there was no automatic run of unionist success. If the Convention was a disaster for constitutional nationalism, then it formalised and augmented the divisions within unionism, with the Ulster unionist delegates tightlipped and firmly shackled to their bosses in Belfast, while the southern unionists under Viscount Midleton were characterised by fluidity and freestyle and inventiveness. Moreover, the compromises pursued by Midleton at the Convention precipitated further disagreement and division, even within an already reduced southern unionist enterprise.

The schism between Ulster and southern unionism had been perceptible long before the Convention, but this was in essence the first public display of a thoroughly partitioned movement.

And, while the Convention did not in itself deliver an Irish settlement, it did look forward to the type of deal which would be struck – one in which a fragmented southern unionism would have only a minor role to play.

There were other forms of setback early in the year. Edward Carson, the Irish unionist leader, resigned, yet again, from government in January 1918, upset by a range of issues, partly – but not exclusively – the emerging condition of ministerial policy on Ireland, which was now focusing on American opinion and the speedy enactment of Home Rule.

The further elaboration of this in the spring – now linked with conscription for Ireland – galvanised Irish nationalism around the leadership of Sinn Féin; and it also created further problems for Carson, who was torn between unflinching support for the British war effort, and by extension conscription, and concern for his movement’s electoral base – where tolerance of the war effort looked set to fail if Home Rule were enacted.

At the same time, the key driver of these ministerial policies – the disastrously successful German military offensive beginning on March 21st, 1918 – caused havoc within the British army, and effectively decimated what remained of the 36th (Ulster) Division on the Western Front. In the spring of 1918, unionism looked – for a while – to be edging towards the condition of constitutional nationalism: bereft of direct representation in the cabinet, increasingly seen as “disloyal” in England, beset by murmurs of revolt, reduced by the war effort and susceptible to the eddies and exigencies of British policy.

The key differences were, however, that where Sinn Féin had gone viral after 1916, the unionists faced no significant organised internal rival within the North, and indeed sustained a relatively robust organisational network focusing on the Ulster Unionist Council.

the unionists came now to occupy important territory which was being vacated by mainstream Irish nationalism: the Great War and the British parliament

This ultimately gave them the political breathing space to stagger into the last successful phase of the war, by which time the bloody defeats of March and April 1918 and the earlier gore of Passchendaele and the Somme could be re-envisioned as a heroic prelude to the final victory.

Moreover, the great parliamentary reform of 1918 – the Representation of the People Act, which turned over the electoral playing field where the Irish Party had long triumphed – not only tripled the Irish electorate, aiding Sinn Féin, it also delivered a constituency redistribution that particularly suited the unionist heartlands of eastern Ulster. Unionists had won 19 seats at the last general election, in December 1910; they now, after December 1918, held 26 Irish seats.

What did all this mean? In essence, the unionists came now to occupy important territory which was being vacated by mainstream Irish nationalism: the Great War and the British parliament.

One of the foundations of Sinn Féin’s assault on Redmondism was the latter’s endorsement of the war effort, and its evident complicity in the 35,000 Irish dead of the conflict.

On the other hand, even in the loyalist North, support for the war was often conditional, and might well have succumbed to the application of both Home Rule and conscription: in fact Redmond, in originally backing the war effort, had effectively sought to contest the “loyalty” of these Irish loyalists.

But they managed to survive the challenge with their political capital and their sense of entitlement shaken but still partly in place; and they carried this baggage into a House of Commons which after 1918 was largely bereft of Irish nationalist representation, thanks to the absentionist strategies of Sinn Féin. This now-formidable presence in parliament alongside the unionists’ annexation of the Irish story of the war meant their impact on the evolving constitutional settlement was considerable.

In short, while it was by no means clear in early 1918 that Ulster unionism would prevail, it was now obvious that the southern unionists, characterised by large egos and little unity, were in a desperate condition.

And the Allied victory in November 1918, together with the general election of 1918, delivered to Ulster unionism two critical spaces in British political life: a share of the moral high ground and – no less important – the House of Commons. For its part, Northern nationalism was different because it had successfully fought to stay the same.

The politics of 1918 exposed a regional faultline between the varieties of nationalism on the island, and delivered the striking paradox that the Irish Party, which had fought so strenuously against unionism and partition, ended up (like unionism) as largely an Ulster party.

Ulster unionism, like Sinn Féin, would certainly shed tears over the condition of its separated brethren in the ‘other’ part of the island; but in the years ahead each was sufficiently unsentimental to focus chiefly upon taking what it could from the wreckage of the British ancien regime.

Alvin Jackson is Sir Richard Lodge Professor of History at the University of Edinburgh and the author of Judging Redmond and Carson: Comparative Irish Lives, which has just been published by the Royal Irish Academy