Minister for Culture, Heritage and the Gaeltacht Josepha Madigan on the various events planned to mark the centenary 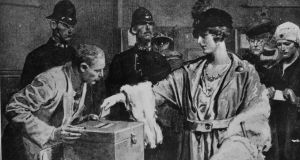 Women queuing up to cast their votes for the first time in the 1918 General Election. Photo by Hulton Archive/Getty

During this Decade of Centenaries, my objective is to continue to bring forward authentic, inclusive and respectful commemorations that promote a deeper acceptance of the differing perspectives on our shared history. The Government will continue to be guided by the Expert Advisory Group on Commemorations as it frames the State commemorative programme over the next five years. The Advisory Group published its Second Statement of Principles last year and this provides a powerful template of guiding principles, intended to support everyone who is involved in delivering authentic, citizen-focused and appropriate commemorations at national and local level throughout the second half of the decade.

The Decade of Centenaries has created a new space in which we can re-assess the events of 100 years ago, exploring how individual historical events each impacted upon the next and giving key protagonists in those events their rightful place in history. I have been very inspired to see how people of all ages, at home and abroad, are exploring and reflecting on the complex and sensitive events of 100 years ago in a way that is personal and meaningful to them.

This year we will remember, explore and commemorate the significant events and themes of 1918, with a diverse range of ceremonial, historical, educational and cultural initiatives. 1918 was a year of profound political change, when the focus shifted away from the Irish Parliamentary Party towards the rise of radical Irish nationalism. We will mark the significant milestones in that movement, culminating in the general election of December 14th 1918, which changed Ireland forever.

Women played a very important role in the transformative events of 1918. The passing of the Representation of the People Act marked the beginning of a long journey towards realising the full inclusion of Irish women in public and political life, with the introduction of limited voting rights for women and their right to stand in parliamentary elections. This year, an exciting and innovative pop-up museum exhibition, curated by Sinéad McCoole, will shine a spotlight on the familiar and less well-known women who have contributed to Irish public life over the past 100 years.

John Redmond’s complex legacy has often been misinterpreted or overlooked in our collective memory. This year we acknowledge, with a series of commemorative events, Redmond’s contribution to the democratic parliamentary tradition which underpinned the emerging Irish State.

International events also impacted upon Irish politics and society during this time, such as the return of soldiers from the battlefields of the first World War; the collapse of the old-world order and rise of the nation state; and the outbreak of the Spanish influenza pandemic in the late spring of 1918, which was reported to have killed more than 20,000 people in Ireland alone. These events had a significant impact across all communities on the island of Ireland.

This year provides a timely opportunity to explore the pressures on nationalist and unionist Ireland in a rapidly changing environment.

November 11th marks the centenary of the signing of the Armistice that ended the fighting in the first World War. We will commemorate all of those who died in that war and continue to reflect upon the complex narratives surrounding Ireland’s participation in the war. We will ensure all of those who fought and died are remembered. We have listened carefully to their stories with respect and empathy and developed a mature understanding of the context of that time, which is appreciative of differing perspectives and motivations. We will also commemorate the greatest ever loss of life in the Irish Sea, when, on October 10th 1918, one month before the signing of the Armistice, the City of Dublin Steam Packet Company ship RMS Leinster was sunk by German submarine UB-123, with the loss of more than 550 lives.

In remembering these events of 1918, we have a timely opportunity to consider again what it means to be Irish and how we tell our story to the world.

Josepha Madigan is Minister for Culture, Heritage and the Gaeltacht