The Irishman expelled from Australia’s parliament 100 years ago

In November 1920, tensions from the Irish War of Independence were felt in Australia 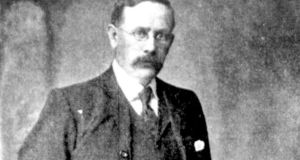 Hugh Mahon was accused of committing treason against the Empire for protesting the death of fellow Irishman Terence MacSwiney.

Last month the centenary of Terence MacSwiney’s death, which was caused by hunger strike, received widespread coverage in Ireland but not so much elsewhere. Yet, 100 years ago, the impact of MacSwiney’s death was felt around the world.

In Australia it aroused such a political storm that it led to an Irish-born member of parliament, Hugh Mahon, being expelled from the Australian parliament. The expulsion arose from a speech Mahon had made at a public meeting in Melbourne which was called to protest against MacSwiney’s death.

In moving the expulsion motion, prime minister Billy Hughes said Mahon was unfit to remain an MP because of “seditious and disloyal utterances” he had made that were inconsistent with his oath of allegiance.

In front of a crowd of 3,000 people in Melbourne’s Richmond Reserve, Mahon declared: “Never in Russia under the worst rule of the czars had there been such an infamous murder as that of the late alderman MacSwiney.

“They were told in the papers that alderman MacSwiney’s poor widow sobbed over his coffin. If there was a just God in heaven, that sob would reach round the world and one day would shake the foundations of this bloody and accursed empire.”

Mahon’s speech was made just days before the second anniversary of the armistice that brought an end to the war in which 60,000 Australians had died fighting for “this bloody and accursed empire”.

Newspaper editorials followed suit. The Melbourne Argus said: “By his statements Mr Mahon had done treason to Australia and had insulted and humiliated the overwhelming bulk of his fellow citizens.” The Sydney Morning Herald said Mahon had “uttered the most vulgar diatribes on the Empire of which this country is a part”.

The Age agreed, arguing that “the government will be compelled to take further action and in doing so it will merit approval”.

When the parliament sat on November 11th, the atmosphere inside the building was stormy and electric. The galleries high above the chamber were filled to overflowing. At 2.40pm the prime minister rose in his place.

For the next 14 hours, interrupted only by breaks for dinner and a midnight snack, the house debated Hughes’ motion and a Labor amendment that would have disavowed the parliament’s right to try Mahon.

The following morning members of the house divided and voted 34 to 17 along party lines; Labor’s amendment was defeated and Hughes’ motion passed.

To this day Mahon remains the only person to have been expelled from the Australian parliament and he is likely to remain so. In 1984 a joint-select committee described his expulsion as an “abuse of power by a partisan vote” and in 1987 legislation was passed removing the parliament’s power to expel its members.

Born in Co Offaly in 1857, Mahon was a journalist and a fervent Irish nationalist. In 1881 he had been imprisoned with Charles Stewart Parnell in Kilmainham Gaol because of his activities in support of the Land League. Released on health grounds, Mahon emigrated to Australia, where he pursued his career in journalism.

When gold was discovered in western Australia in the 1890s, Mahon moved there. In 1898 he was appointed editor of the Kalgoorlie Sun, gaining a reputation as a pugnacious editor, exposing corruption in government and business.

Elected in 1901 to the first parliament of the newly federated Commonwealth of Australia, he soon gained a reputation as the “go-to man” for Irish and Catholic causes. In 1905 he shepherded a resolution in support of Irish home rule through parliament.

Mahon served as a minister in four Labor administrations. He was postmaster general in the world’s first national Labor government in 1904 and served as minister for external affairs during the first World War.

The advent of the Irish War of Independence widened Australia’s sectarian divide and as the war intensified so too did the vicarious conflict in Australia. It was in this context, described by New South Wales attorney general Edward McTiernan as “a veritable hurricane of sectarian strife”, that Mahon made the speech which led to his expulsion from parliament.

At the byelection for his seat, Mahon sought vindication from his constituents. But in a campaign fought mainly on empire-loyalty grounds he was narrowly defeated.

Out of parliament but not out of a job, Mahon continued to run his businesses. He was chief executive of the Catholic Church Property Insurance Company, which he formed in 1911 at the request of Catholic bishops. In 1922 he made his first and only visit to Ireland since his exile 40 years earlier.

Mahon died at his home in Melbourne in 1931. Debate in parliament on the usual condolence motion was interrupted when a Country party member, Roland Green, a veteran of the war who had lost a leg in France, stormed out of the chamber after declaring he could not support it because of Mahon’s attack on the empire.

To Green and others like him, Mahon’s words still rankled a decade or more after the event. They were still obscene and unforgiveable.

Not all agreed. Another ardent Irish nationalist, the Catholic archbishop of Melbourne Daniel Mannix, said: “The late Mr Hugh Mahon was [my] personal and honoured friend . . . The late Mr Mahon had been a good Irishman, a good Australian and an exemplary Catholic.”

Jeff Kildea is an adjunct professor of Irish Studies at the University of New South Wales and author of a two-volume biography of Hugh Mahon titled Hugh Mahon: Patriot, Pressman, Politician