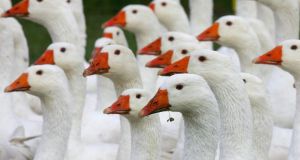 Geese on a farm in Kuhhorst, Germany, ahead of St Martin’s Day. Photograph: Michael Urban/DDP/AFP via Getty Images)

The late Brendan McWilliams (1944-2007), who penned the regular Weather Eye column in The Irish Times, had a wonderful way of marrying folklore, history, literature and science with his principal profession as a meteorologist. In 2006, to coincide with the Feast of St Martin, he wove a tale of Roman legions, Christianity, and the etymology of fine early-morning spiders’ webs – which I had previously associated solely with prophylactics.

In 2018, when the second cohort of students on the Masters in Gastronomy and Food Studies at TU Dublin were deciding on themes for their “global in the local” group dining project, one team, inspired by a Swedish student in their group, prepared a meal of spicy blood soup followed by roast goose.

They killed two geese on a fellow student’s farm in Carlow and got blood from a fifth-generation artisan pork butcher. But, what do blood, geese, Roman soldiers and spiders have to do with the Feast of St Martin? Who was he, and what are the traditions associated with Martinmas in Ireland?

St Martin was the former Bishop of Tours in northwest France. Born in Italy in 316, he followed in his father’s footsteps into the Roman army. While in service, he found himself riding through the streets of Amiens in northern Gaul on a cold, bleak November morning. He was accosted by a scantily clad beggar, shivering with the cold and seeking alms.

Overcome with pity, Martin took his sword and sliced his cloak in two, and gave one half to the mendicant. Legend has it that God was so pleased with this generous act that He let the sun shine warmly on Martin until the good soldier could rectify his state of undress. God is said to mark this event by sending a few days of fine, warm weather early each November, a period which has traditionally come to be known as St Martin’s Summer.

The story does not end here. It seems that the Lord appeared to Martin again some time later, dressed in the half-cloak which had been given to the beggar. This led Martin to leave the army and devote the rest of his life to prayer and Christianity. So successful was he in this new calling that by the year 370, his name was mentioned for the episcopal vacancy at Tours.

Alarmed by this daunting prospect, Martin hid in a barn to avoid the call, but a noisy goose revealed his hiding place. It seems that Martin showed a vengeful streak towards the raucous fowl. After his elevation, the new bishop is alleged to have asked for the goose to be served for dinner. This established the tradition of eating goose on St. Martin’s Day; it also explains why St. Martin’s Summer is often called the “Goose Summer”.

In addition to the meteorological link, Brendan McWilliams brought an etymological twist to the story. Many species of spider, it seems, disperse their populations by allowing themselves to be wafted through the air. On sunny days around this time of year, a spider will climb to the top of some convenient projection and weave a thread several yards in length until both spider and thread are carried off by the wind. When the spider comes to ground again, it releases the thread, which is then often seen drifting and shimmering in the Goose Summer’s sunlight.

It seemed appropriate to call it “goose-summer” thread, or gossamer as we know it now, and familiar to this writer principally at that time from the Durex Gossamer condoms.

My Swedish student was marking food traditions still practiced in his home region, the southernmost province of Scania. However, the majority of his Irish classmates were unaware of the links between Martinmas, blood and geese, and that the Feast of St Martin used to be celebrated for centuries throughout most parts of Ireland in an unusual way.

Householders, usually led by the woman of the house, would stand on the doorstep at sundown on the eve of the feast and kill an animal or fowl by slitting its throat. It was the custom to then spill the blood on the threshold and let drops fall from the dying animal in the four corners of the house to protect from evil otherworldly malevolent forces and bad luck.

Billy Mac Fhloinn notes in his book Blood Rite: The Feast of St Martin in Ireland that in some places, they would even anoint the members of the family on the forehead with the blood, as a prophylactic measure to keep people safe from disease, death and evil spirits during the coming winter. The custom persisted long into the 20th century in many places, and even into the 21st in some parts of the west of Ireland.

St. Martin is believed to have died crushed between two mill wheels. On the 11th November 1828, Humphrey O’Sullivan, from Callan in Co Kilkenny noted in his diary that in honour of the saint, no miller would turn a mill wheel, nor any business that required the turning of wheels would be engaged in, on St Martin’s Day. It was believed that great punishments would fall on anyone who yoked a horse and cart, turned a spinning wheel, or worked a mill.

The sacrifice and shedding of blood on this day was once part of the ancient festival of Samhain, but changed in the medieval period to the new date of November 11th, hence the term Old Halloween. Geese were not the only animals killed at this time of year in Ireland. O’Sullivan noted in his diary entry for November 10th, 1830 that every strong farmer and nobleman should kill a sheep, an ox or a pig and share the meat with their poorer neighbours on St Martin’s Day.

There is often conflict between modernity and tradition. Whereas the American dictionary meaning of prophylactic is condom, the broader European meaning is “a medicine or course of action to prevent disease”, practiced by our ancestors by the ritual spilling of blood. Thanks to Brendan McWilliams’ masterful storytelling and etymological explanation in 2006, I got to link both definitions to the Feast of St Martin. Stay safe, and protect yourself this Martinmas!
Dr Máirtín Mac Con Iomaire lectures at TU Dublin