Ardal O’Hanlon on his grandfather’s Bloody Sunday role: ‘He was one of the good guys’ 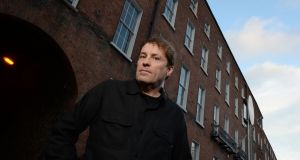 Ardal O’Hanlon outside 28 Upper Pembroke Street where his grandfather was in action on Bloody Sunday. Photograph: Alan Betson/The Irish Times

The bloodiest place on Bloody Sunday (November 21st, 1920) morning was 28 Upper Pembroke Street off Fitzwilliam Square. A century ago this handsome four-storey Georgian building was let into apartments, occupied by British intelligence officers and their families.

It was a prime target for the IRA on Bloody Sunday morning, November 21st, 1920. Charlie Dalton, the youngest member of Michael Collins’s “Squad”, courted the maid and obtained the exact location of where each officer was situated within the building.

Eight of the people on the IRA hitlist were staying in 28 Upper Pembroke Street. Six were present that morning. Capt Leonard Price and Maj Charles Dowling were shot dead in their pyjamas. Lieut-Col Hugh Montgomery, a cousin of Field Marshal Bernard aka “Monty” Montgomery, died of wounds three weeks later. The other men would have been killed had their attackers been better shots.

After O’Hanlon joined the Newry brigade, his studies took a backseat to his revolutionary activities

Between eight and 10 IRA volunteers were involved that day at number 28. One of them was Michael “Mick” O’Hanlon, a 22-year-old UCD medical student from Mullaghbawn, Co Armagh. The eldest of nine children, he was educated at Blackrock College and then UCD in the hope that he would, on qualification, provide for his siblings coming behind him.

O’Hanlon joined the Mullaghbawn company, Newry brigade in January 1918, after which his studies took a backseat to his revolutionary activities.

As a member of C Company, 3rd battalion of the Dublin Brigade, he was drafted in for Bloody Sunday morning to aid the squad in its business of wiping out British intelligence agents in Ireland.

On the night before Bloody Sunday, he stayed in a room at the back of St Vincent’s Hospital, then located on St Stephen’s Green. He and two other men were warned to expect resistance and were given an axe to break down doors and a grenade. O’Hanlon was told to shoot Capt Brian Keenlyside, a decorated first World War veteran.

O’Hanlon gave his account to Ernie O’Malley, and it was published in the book The Men Will Speak To Me: Ernie O’Malley’s Interviews with the Northern Divisions.

As he and two other men burst into Keenlyside’s room, Keenlyside’s wife covered her husband’s body and pleaded with them not to shoot. Instead they dragged him out of the room and down the stairs while his wife screamed at his assailants and tried to pull back one of the attackers.

Keenlyside was placed against the wall to be shot, but the gunman, Paddy Flanagan appeared to lose his nerve. He was shaking so much that he had to place his left hand on his right hand to steady himself.

O’Hanlon recalled: “Paddy asked him his name and he clicked his heel. I was covering him and the shot blackened my hand. Paddy fired twice but I don’t think the man was killed. He wrote his experiences in the Daily Sketch. I had admiration for him. We got his revolver only.”

After the shooting, O’Hanlon crossed the River Liffey, delivered his revolver to a safe house, caught the train to Dundalk and was sitting down eating his meal at home when the Croke Park shootings happened.

The mass shooting at Croke Park that afternoon – an act of reprisal by Crown forces for the morning assassinations targeting British intelligence agents – would leave 14 people dead and up to 100 injured.

Later, O’Hanlon was tasked with an intelligence job by Michael Collins – not very successfully as it turned out. “He read out lists to me, but as he went like a steamroller and as I wasn’t accustomed to the west Cork accent, I didn’t get much from his talk.”

After being incarcerated while serving with the anti-Treaty side in the Civil War, O’Hanlon resumed his medical studies as a mature student in 1925 and graduated in 1927. He became a doctor with the Army Medical Services and died in 1968 at the age of 70.

His son Rory O’Hanlon followed him into the medical profession before embarking on a career in politics in which he served in several governments as a Fianna Fáil minister and then as Ceann Comhairle. Mick O’Hanlon’s grandson is the well-known comedian and writer Ardal O’Hanlon.

Rory O’Hanlon remembers his father as a “mild-mannered man who wouldn’t pass a bad judgment” on anyone. If he heard second-hand gossip or rumour about somebody, he would dismiss it as “public house talk”.

Rory says his father had no political ideology other than to free Ireland of British rule. He spoke to him only once about Bloody Sunday, to recall that they decided not to shoot Keenlyside in front of his wife.

The gunman of Bloody Sunday was not the father he remembers. “The man I knew wouldn’t hurt a fly,” Rory says. The IRA, his father served in, “was the legitimate army of the Irish republic as democratically elected in the 1918 election”, and his actions on that morning had to be seen in that context.

Ardal O’Hanlon was just three when his grandfather died. He only knew him by reputation as a “quiet, humble gentleman, very conscientious and a man of great integrity”.

As a child he would play with his grandfather’s officer’s sword and imagine all kinds of derring-do.

Ardal says he really only got to know about his grandfather’s involvement in Bloody Sunday from the Who Do You Think You Are? programme broadcast in 2008.

“Walking in his footsteps that morning, I felt very small,” he remembers. “Personally, to my shame, I never really had that sort of belief in something or dedication to any cause.

“Pride was probably my abiding emotion. I should stress that certainly I wouldn’t bask in any reflected glory. It is very far away from where I am sitting today.

“I was surprised about how involved he was in the mission itself. I greatly admired his bravery and his conviction.”

Present generations are inclined to take Irish independence for granted, he believes, without considering the sacrifices that went into making it happen and the risks taken by people like his grandfather. In a peaceable country it is hard to imagine the motivations that would make an otherwise ordinary medical student go out with the desire to shoot somebody.

“As far as I was concerned, it is thanks to people like him that people like me don’t have to make such difficult decisions two generations later. I was quite humbled by the experience,” Ardal explains.

“There was no doubt in my mind then, and certainly not now, that he was one of the good guys. He was fighting for a just cause and he was on the right side of history.”

Could he ever imagine killing somebody in similar circumstances? “I don’t know, I would like to think that if I was every faced with what he and his generation were faced with, you’d respond in some way, but I really don’t know how a man of his temperament and personality found himself in that position. My imagination fails me.”

The Men Will Talk To Me: Ernie O’Malley’s interviews with the Northern Divisions is published by Irish Academic Press priced €16.99