Christine and the Queens at Electric Picnic: Standout show from a singular performer 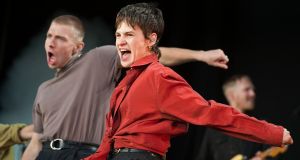 Christine and The Queens play the main stage at Electric Picnic. Photograph: Dave Meehan for The Irish Times

CHRISTINE AND THE QUEENS ★★★★

Fresh from making a cameo at Charli XCX’s show, Christine and the Queens skedaddles over to the main arena for her own set. One of the most eagerly anticipated acts of the weekend, her set coincides with when many punters depart to line their stomachs for the long night ahead, meaning it’s not as packed as one might expect.

Nonetheless, she pulls out all the stops. Unlike the guitar-strapped singer-songwriters who have taken to the same stage this weekend, Christine and The Queens doesn’t scrimp when it comes to showmanship. Confetti, pyrotechnics, dance breaks – it’s all here. The songstress performs songs like Tilted and Doesn’t Matter accompanied by a troupe of dancer performing intricate choreography worthy of Bob Fosse. At times, it’s like watching a minimalist stage musical.

It’s a standout show from an utterly singular performer. Intense, earnest, sultry, captivating – Chris is all of the above.

During the set, she notes that it’s the final date of her tour. It’s bittersweet that more aren’t here to see her off, but she can be satisfied that the show will live long in the memories of those who witnessed it. Her parting words to the audience? “Stay freaky, my friends. Hard times, stay freaky.”