Charli XCX at Electric Picnic: pop nirvana, then a surprise, then it gets really good

Review: Charli XCX has the Electric Arena crowd in the palm of her hand from the off 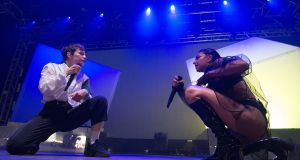 Charli XCX is joined by Héloïse Letissier, aka Christine and the Queens, during her Electric Arena set at Electric Picnic 2019. Photograph: Dave Meehan for The Irish Times

Charli XCX struts out on stage wearing an all-black ensemble and looking like she’s starring in a reboot of The Matrix. Far from making niceties, she immediately implores the crowd to “make some f**king noise” and breaks into the anthemic Blame It On Your Love, followed by I Love It.

There is an urgency to her set and it soon becomes clear why as she welcomes Héloïse Letissier, aka Christine and the Queens, to perform their recent duet Gone. Watching the pair vibe and bounce off each other is something akin to pop nirvana. Some artists might struggle to follow up such a moment but Charli XCX has the crowd in the palm of her hand. She cycles through hits – Fancy, Boys and 1999. Thrillingly, she performs a cover of Wannabe, fitting given Charl XCX exudes the same sass and mischief the Spice Girls once did.

It’s a perfectly pitched pop set and a reminder of Charli XCX’s credentials as both a performer and songwriter. The crowd laps it up and they show their appreciation by sticking everything from their middle fingers to their phone torches in the air. Everyone leaves buzzed and hyped for a wild Saturday night. Job done.