Patrick Freyne: Rise of the Murdoch Dynasty is another great sitcom on a powerful patriarch 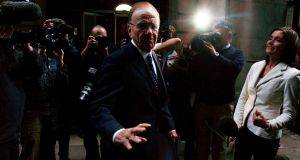 Rupert Murdoch in The Rise of the Murdoch Dynasty: Benny Hill music to be added later. Photograph: Tom Pilston

A lot of people have pointed out that the BBC documentary series The Rise of the Murdoch Dynasty (BBC2, Tuesday) has much in common with a certain fictional television programme all about succession and the difficulties of succession and the ways in which a cranky elderly relative uses the prospect of succession to torment his doomed offspring. That programme is called Steptoe and Son. Then there’s Glenroe, Star Wars and He-Man and the Masters of the Universe (Skeletor is He-Man’s da, right? If so, he’s definitely a Murdoch analogue). But, now that I think about it, the show that critics are generally referencing is probably HBO’s darkly comic drama Succession, where the patriarch is actually in the cable news business just like Murdoch – unlike Skeletor, who was, I believe, in Eternian real estate, social media marketing and fidget spinners.

Within 10 minutes of watching the first episode of The Rise of the Murdoch Dynasty, I am struck by the nature of many of the interviewees. We have, to name but four: Piers Morgan, Nigel Farage, Andrew Neil and Alastair Campbell. There should be a collective noun for such people (an “ooze” perhaps?). There’s definitely a descriptive term, but I’m not allowed use it in The Irish Times.

They all look quite happy with themselves, shiny and smug and engorged with self-importance from suckling so long on the teats of Murdochian power (please picture this). We also meet Alan Sugar, star of the UK Apprentice, discussing his hero-worship of Murdoch but not how he copied his face-style by pickling his head in salt. And we see footage of Donald Trump, host of the original Apprentice and premier of an obscure and declining power, bloviating about his “good friend” Rupert.

“There’s only one Rupert,” he says, before adding, ominously, “that we know.” This is either a veiled allusion to the fact Rupert has a wardrobe full of clones (probable) or an underhanded dig at famed liberal cuck Rupert the Bear (also probable).

Back to Rupert the “Human”. We get very little here about Murdoch’s early days. There’s nothing about the rest of the A Team. We don’t hear the story of how a smug bespectacled prune was granted sentience by a bolt of antipodean lightning or how he first acquired the ring of power from the bed of the river Anduin and degenerated into the form we see before us now. No, the period this episode deals with is the mid-1990s, when Murdoch is already supreme, hoping to choose one of his Murdochspawn as a successor while apparently trying to extract policy promises from political leaders in return for favourable coverage.

We get snippets of rare interview footage of his adult children from an older television documentary in which they appear haunted and dead-eyed as they reckon with the quirky ways their father has trapped them in luxury and complicated their lives with newer, shinier Murdochspawn (the children of Wendi Deng). We also see footage of Murdoch courtiers as they are summoned to his yacht to be ferried to a summit on a private island. We see the looming ascendency of his flame-haired protegee Rebekah Brooks and her consort, Grant from Eastenders, together appearing much like a gleaming moon and a burning sun.

There are interviews with politicians and newspaper editors, some suggesting that when Murdoch rode them around like donkeys in hats, they were secretly in control the whole time. Most chilling are the bits in which Alastair Campbell tries to make the fact New Labour actually invited Murdoch to parasitically invade Tony Blair’s brain sound like a tactical win and not something that ultimately helped seed Euroscepticism (Murdoch hated the Euro) and war (Murdoch felt like having a war). The fact that Blair evidently spoke to Murdoch more than to his own ministers in the days before the invasion of Iraq speaks very loudly for why media monopolies need to be shattered with a big legislative hammer.

Yes, it would all be quite damning if Murdoch wasn’t already happy enough splashing about in the lakes of hell. Because hell, as you know, isn’t so much other people as specific other people (Farage, Morgan, Blair, Sugar and Brooks, for example) and Murdoch has filled his pool with them.

It’s a consistently well-made, well-researched documentary, and future episodes will deal with the phone hacking scandal and the rise of his American empire – both things foreshadowed here. My only problem with it all is that its serious-minded approach is ultimately flattering to Murdoch. He gets stately classical music soundtracking his escapades, and we see one powerful person after another talking about how they bent to his whims (Nigel Farage even notes that he checked with Murdoch for permission to appear). This makes him seem like a complex Shakespearean figure and not just Harry Enfield’s Loadsamoney character with a luxury yacht and a printing press.

So, it’s a matter of taste, but I’d prefer if they’d soundtracked all of the Murdoch footage with the Benny Hill theme or some comedy sound effects. Say what you like about Steptoe and Son or Succession, but both shows understand the inherent absurdity of a controlling patriarch waving his arm across a desolate vista of loneliness, fear and hate, and saying, “All this will be yours.”

Merlin works as a know-nothing consultant for Uther Pendragon, the Rupert Murdoch of his day

In Cursed (Netflix, from Friday), issues of succession are a matter of magical swords and mystical dreams. (To quote Michael Palin: “[That’s] no basis for a system of government!”) A retelling of the Camelot story, Cursed follows enchanting pond-bint Nimue (the lady of the lake) here recast as a plucky youngster born into a tribe of photogenic fairy folk who live in harmony with nature, sorting their recycling properly and claiming they found the lockdown “restful”.

Then along come some red-robed warrior monks to burn everything. Luckily, Nimue is a special chosen one with powers (much like meself), and soon she’s on the road with a handsome hunk named Arthur, tasked with taking a magical sword to an inept and drunken magician named Merlin. Merlin works as a know-nothing consultant for Uther Pendragon, the Rupert Murdoch of his day, and all the best bits involve him drinking too much (his drunk acting reminds me of a very different Arthur franchise: Arthur on the Rocks) and failing to obey his master’s whims. Uther wants rain for the crops. Merlin gets it to rain, but it rains blood. “Merliiiin!” cries Uther.

I could watch episode after episode of this, with Merlin as a sort of goth Frank Spencer saying “Ooh, Morgan Le Fay!” to his long-suffering mystical lady-friend. Instead they’ve gone for a slightly over-familiar heroine’s journey in which Nimue must come into her power while beset on all sides by malevolent forces. It reminds me a little of Tony Blair’s ascendence in The Rise of the Murdoch Dynasty. Though I have slightly higher hopes for Arthur’s fictional Britain than Murdoch’s actual one, if I’m to be completely honest.

Culture Night 2020: From a Liffey tour to Cork slang lessons, 30 events not to miss
3