Whoa! Do you think we could do this in America, asks the wide-eyed but elderly teen star 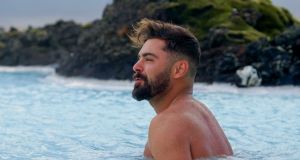 Zac Efron is, to be fair to him, engaged and funny and doing his best to learn.

A hippy in a Central American jungle explains how farts work to an amazed and wide-eyed Zac Efron. That’s how I’d have pitched Down to Earth with Zac Efron (Netflix, from today), a programme in which the now elderly teen star tours the world with his “guru” (Darin Olien), exploring innovations around food and water and “energy”.

To be fair, no self-respecting American star reaches the age of 30 without a “guru”. (In Ireland stars aren’t allowed to have gurus. Instead they get a sneery friend from home who insists on calling them by their school nickname.)

Down to Earth is a Goop Lab-style production, but unlike in that similarly utopian Netflix series, in which the being known as Gwyneth Paltrow observes the world coldly through narrowed, snake-oil-selling eyes, Efron’s eyes are wide open and crystal blue, and if he ever had any snake oil to sell, Olien has probably already traded it for a solar-powered skateboard that doesn’t work.

Given Zac Efron’s endearing amazement at everything he encounters, I now understand High School Musical to be a documentary about his actual life as a spontaneously hoofing and yodelling hunk

Efron is a very likable baby with a beard. I can completely see his appeal. He first became famous in High School Musical. Given his endearing amazement at everything he encounters in this programme, I now understand High School Musical to be a documentary about his actual life as a spontaneously hoofing and yodelling hunk.

Olien, meanwhile, looks like someone carved a handsome man out of a meatless vegan spread. He wanders about doing Gollum and Yoda impressions and saying things about energy. Together, as far as I can tell, this duo constitute what’s left of soft American cultural power in the era of Trump.

There are a few key flaws in this show. Firstly, their intended audience is clearly Americans, aka the only real people on earth, and therefore they take all facts about the outside world as hugely revelatory. The existence of France in the second episode is presented as a pretty big deal.

This leads to a second problem that some theorists call “the myth of American innocence”, the implicit notion that Americans are the goodies and that the United States is still the future. I mean, Efron thinks he’s seeking out new ideas to bring back to the US, but from a cursory glance at the news it’s clear he’s really just scouting out places he may eventually flee to.

This doesn’t mean that Down to Earth isn’t a diverting enough travel show. The first episode sees them visiting hot-spring spas and eating foraged foods and making chocolate and exploring renewable-energy plants in Iceland.

“That’s like mother earth, bro!” says Olien as they gaze at the power of a geothermal energy plant.

“I can’t wait to tell the world about this,” says Efron, understanding correctly that the Icelandic people can neither read nor write nor broadcast nor travel.

In the next programme Efron’s eyes widen so much he begins to resemble an anime puppy as he and Olien go through the channel tunnel from England to France. Once there they are amazed and say “whoa!” and “sick!” some more while visiting the city’s well-funded publicly owned water-purification plant. (I should mention that much of this programme is made up of the type of factory visits pioneered so many years before by Bosco.)

What’s fascinating here is the depoliticised way Efron and Olien discuss bringing the innovation of well-funded public services to the US. What they are amazed by is, essentially, European socialism, and it’s actually quite sweet to see Zac Efron being radicalised in real time.

This programme also includes a trip to Lourdes in which a Vatican-sponsored doctor shows them the ways they verify miracles (“Sick!”) and a Los Angeles-based water sommelier in tartan clown pants who tries to convince them that being a water sommelier is a real job (“My mind is actually blown!”). Sometimes Efron is so open minded I worry he’ll get sepsis.

They get into stranger territory in the third episode, where they go to Costa Rica but manage largely to speak to Americans. The show even begins with a definition of the word “expat”. That definition, by the way, is not my definition (“a self-aggrandising word that allows migrating rich white people to avoid the term ‘immigrant’”). Anyway, there are 50,000-70,000 American “expats” in Costa Rica, and those are the people Olien and Efron seem interested in high-fiving and saying “sick!” to.

They visit a sustainable community where the residents have apparently invented having a farm (“What if your lawn was food?”) but where, reading between the lines, the real innovation is being a wealthy landowner. Efron is reliably amazed. Yes, why doesn’t everyone buy a load of land in Costa Rica and become an eco-expat? In fairness, they also have a waste-recycling plant that collects methane and prompts the conversation in the opening sentence of this article.

Look, some of this programme is actually sort of educational, and Efron is, to be fair to him, engaged and funny and doing his best to learn. In fact, he’s so delighted by everything that I really want to take him to my house to impress him with my own particular experiment in living.

“And you just rub the bread on the butter like that?”

“Yup, it means you don’t need to find a clean knife.”

“Wait till you see what I do instead of having enough clean underpants.”

“I just wear yesterday’s underpants inside out.”

“No way, dude! Do you think we could do this in America?”

Pluto: Back from the Dead (BBC Two, Monday) is a typically thorough Horizon special in which the excellent voice of Patterson Joseph guides us through a cast of scientists trying to interpret new data and imagery from Pluto garnered by the New Horizons probe. It seems the planet is not as geologically inert as once thought and may well have the atmosphere and water content to produce life.

I felt the programme could have done with even an occasional exclamation of “Sick!” or “Whoa!”, and no one high-fived on camera. It was still cosmically great public-service broadcasting. Though, at one point, when some scientists were zooming in on images of the surface, I did half-expect to see an amazed-looking Zac Efron skating around it.

Kathleen Edwards: ‘I became terribly depressed and needed something to change’
10