Waiting for Shakespear...The Festival in the Air is an eight-day online celebration 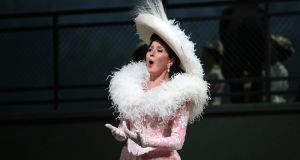 Wexford Festival Opera is going ahead this year, just not as you knew it before. The Shakespeare-themed programme announced by incoming artistic director Rosetta Cucchi last October has been rescheduled to 2021. In its place is Waiting for Shakespeare...The Festival in the Air, a free eight-day online celebration from October 11th-18th.

The original festival was not the organisation’s first cancellation this year. Chief executive David McLoughlin says that a fundraising event in London early in March was initially postponed and then cancelled. The burgeoning pandemic spurred him to convene a crisis management committee and draw up a contingency plan. As he puts it, “What do we do if a staff member contracts Covid? What would we have to do if Covid came into the building [the National Opera House]?”

There will be real, live events, the highlights being a performance of Rossini’s Petite messe solennelle

Booking for the festival was due to open at the end of March and, he says, “Believe it or not, 60 per cent of our booking comes through in that first week, when the principal Friends [regular supporters] tend to book.” For him, it’s not just a huge chunk of box-office revenue, “It’s also a barometer. We keep a very close eye on it and make comparisons with previous years.”

The closure of all cultural venues due to coronavirus health and safety measures had an immediate impact on “the opera house side of our business”.

“We had quite a lot of events booked in, so we had to contact ticket holders and promoters.” Priority booking for the festival did open in March – it was not clear at that point that the festival would have to cancelled – and it turned out to be “down quite a lot on last year” and when the full lockdown was imposed, that gap widened even further.

On the plus side, there was a reassuring move by the Arts Council, which gave Wexford a 2020 grant of €1.45 million. The council is allowing organisations to draw down up to 90 per cent of existing funding commitments, even if Covid-19 means that key activities can’t take place. Revised programmes of work, however, would require specific approval from the council.

To limit “cash burn”, he says, “We had, unfortunately, to temporarily lay off a number of staff, and there were pay cuts introduced as well.”

For McLoughlin, a key moment came at the end of April, when “the chief medical officer said, and it was reiterated by then minister for health Simon Harris, that even when restrictions are eventually lifted, social distancing would still have to be observed until a vaccine was developed or the problem was eradicated.”

Like many festivals and production companies, box office income accounts for a third of Wexford’s budget, and two-metre social distancing would reduce capacity by 85 per cent. That’s before you deal with issues for artists, crew and staff. Voluntary contributions from sponsors and individuals had already begun to dry up. “We were predicting that our turnover would be cut by about 50 per cent. And we therefore had to come up with a model to address that.”

McLoughlin says, “I don’t underestimate the challenges that we’ll be facing next year, even though I’m reasonably confident the whole Covid situation will probably have been sorted out. It’s still going to be a very challenging year. It’s about confidence, really. Restoring people’s confidence to be in large gatherings in fairly intimate venues, like Wexford, for 2½-3 hours, that’s going to take a bit of time. It’s not going to happen in the short term.”

“The terrible thing about this pandemic,” he says, “apart from all the deaths and the financial effects, is that it literally pushed people apart. It’s created a distance between people. And for an event that is based on warmth and hospitality and friendliness, like Wexford. . . ” His voice fades without stating a conclusion but he is explicit about his fear for the future. It’s that “cultural activities involving a live audience would never be the same again”.

This year’s disruption, says Cucchi, has been “a very tough process”. The issue came down to whether “to do something else or do nothing at all,” though “in my mind, and especially in my heart,” she knew she would move heaven and earth to have a festival of some kind in 2020.

Cucchi was locked down at home in Pesaro as the pandemic ravaged Italy while she also grappled with the future of the 2020 festival in Wexford. “I made maybe four different scenarios, each one smaller than the other, because the restrictions from social distancing and the reduction in the box office were there. In the end I said, no, I need to do something different.”

“I saw lots and lots of theatres who were putting their work online. That wasn’t a solution for me. It didn’t give me the possibility of putting people on stage. I was sure that at some point we would be able to do that, though I was not sure that we could have the public in the house.”

What she was thinking of was one of the innovations she had planned, the Wexford Factory, a two-week academy for singers from or based in Ireland, with a line-up of tutors to include leading tenor Juan Diego Flórez, Irish soprano Celine Byrne, Ernesto Palacio of the Rossini Opera Festival, and Dmitry Vdovin, artistic director of the Bolshoi Theatre’s young artist programme in Moscow.

So, although the title says “Festival in the Air”, there will be real, live events. The highlights are a performance of Rossini’s Petite messe solennelle (dedicated to the victims of Covid-19), a new opera by artist-in-residence Andrew Synnott, and concerts by Celine Byrne and US soprano Lisette Oropesa – the latter in a Donizetti-rich programme with orchestra, the arias chosen to keep the orchestral numbers small enough for the players to be spread out and socially distanced on the National Opera House stage.

Wexford Factory will also perform episodes from Verdi’s Falstaff, streamed from the stage of the opera house – RTÉ is the digital partner – and there will be pop-up events in Wexford town.

Although the festival has not explicitly advertised this, Cucchi is hoping it will be possible to allow people attend these concerts in the flesh, however small the audience might have to be. “The contact between the stage and the public is very important for an artist. I need to have this exchange of feeling. I really hope to have the public in.”

The challenge in 2021 is “for theatres to get back to a normal life, keeping in mind what has been happening in the current period, our thoughts, what stimulated our fantasy, in order to make things even better. We are under the sword of Damocles – the uncertainty about what will happen with this virus. We just don’t know, but we need to build the future somehow. Will they find a vaccine? Will the virus just disappear?”

She clearly accepts that things won’t be the same again. “We need to learn from the period instead of complaining. It has been terrible. But we must learn from that.” She certainly took a demanding route in handling the rescheduling for 2021. She rang all the artists first, and only then contacted their agents.

“For me, it was important that the artists heard of the cancellation directly, not from rumours or media, even if they already knew it was inevitable. It has to be reassuring for them to be told, don’t worry, guys, this festival will happen next year, and you will be there if you are available.”

And Cucchi says she is not just  talking about the singers but also the chorus, the orchestra, the technicians – “everybody”; 90 per cent were able to say yes.

“The main thing for the artists,” she says, “is fear. Not only financial, because, yes, financial is important. But the fear of losing a community. For us, the theatre is a community that has been very difficult to achieve. I remember when I was young, the idea of being part of the community of the theatre was the most important thing.”

I asked her about the experience of living through the pandemic in Italy.

“We passed through the darkest moment before everybody else. But also we exited from it earlier. In the middle of June, the theatres reopened. Life is coming back to normal. There are no restrictions apart from social distancing and wearing masks indoors. We have started to feel that we are alive again.

“There are some young people whose behaviour is crazy. But everyone else is very careful. The prize is our freedom.”

Details of Waiting for Shakespeare…The Festival in the Air are on wexfordopera.com