Violence against women, by both sides, was an integral aspect of the War of Independence 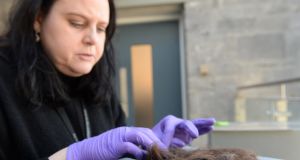 Brenda Malone, curator of IRA Intelligence File at the National Museum of Ireland, with hair believed to have been sheared, and found in the possession of Michael Barry when arrested in 1920, is among items which appear in the exhibition Irish Wars 1919 to 1923 at the National Museum of Ireland, Collins Barracks, Dublin. Photograph: Dara Mac Dónaill

Evidence that violence perpetrated against women was an integral aspect of the conflict during the War of Independence and has only belatedly been acknowledged 100 after the revolution and nearly 20 years after Louise Ryan published her pioneering article, ‘Drunken Tans’. Although women were killed in much smaller numbers than men, particular forms of bodily and psychological violence were targeted at women by all sides.

Numerous reports of coercive or violent hair-cutting assaults during the War of Independence are evident both in local and national newspapers between 1919-1921 and in Bureau of Military History witness statements. Forcible hair-cutting was and is a serious assault. Frequently, this caused injury and subsequent trauma or mental illness because of the terror and force involved in cropping women, who frequently were dragged, held down, beaten or badly shaken by the ordeal.

Hair-taking both in Ireland and in other wars throughout time served other functions as a weapon of war – policing of women’s sexuality, social control of women’s intimate or personal relationships, in particular with ‘enemy’ men, a symbolic attack on women’s sexuality/sexual reputation by removing their hair, thereby marking or labelling them sexual transgressors/whores/ ‘horizontal collaborators’ etc, and as a war trophy.

Military historian Antony Beevor has shown how during the Middle Ages, this mark of shame, denuding a woman of what was supposed to be her most seductive feature, was commonly a punishment for adultery. Shaving women’s heads as a mark of retribution and humiliation was reintroduced in 20th-century wars, and Ireland was no exception.

Numerous cases involving large groups of, often masked, men assailing women are documented in most counties during the War of Independence. The Leitrim Observer reported on May 29th, 1920, ‘Galway Girl’s Hair Cut Off’: “Another haircutting outrage took place in a village called Chuslough, Castlemoyle, about 5 miles from Tuam on Sunday night. At about 11.30pm, five men, absolute strangers casually raised the latch of the door of Mr. Wm Mannion’s house . . .”

Miss Annie Devine first had her hair cut off with a shears for corresponding with an RIC constable in her neighbourhood: “A hair-cutting machine was used to complete the job, the hair being almost cut to the skin.” The perpetrators stated: “We will make Irish girls have nothing to do with Ireland’s sworn enemies.”

Public humiliation in the full view of neighbours and the community followed. A shaved head could not be easily concealed. Likewise, the Belfast Newsletter on June 30th, 1920, reported ‘Rebel Gallantry Girls’ Hair Cut Off in County Kerry’: “. . . about 1 a.m. on the morning of 26th a party of men, fifteen to twenty in number, armed and disguised, called at a house in Tralee and forcibly dragged two girls into the roadway. They knocked them down and in other ways brutally assaulted them, and then, whilst two men held their heads, a third cut their hair off with a pair of shears, and, not content with this outrage, they poured tar over the girls’ heads.”

Hanna Sheehy-Skeffington in a letter to the Irish Independent on August 22nd, 1920, titled ‘Outrages on Girls. A Base and Cowardly Act’ suggested these attacks were not unnoticed or confined to one side: “Sir-Referring to the report . . . of the detestable outrage by uniformed forces of the Crown in cutting off the hair of Republican girls by way of ‘reprisals’, may I say that I hope (as will every good Republican) that the monopoly, hitherto enjoyed by the Army of Occupation, of atrocities upon women and girls will be left them undisputed, however gross the provocation? I noted with satisfaction the drastic punishment meted out by Sinn Fein police to certain hooligans who recently committed a similar barbarity upon a woman. The criminals being arrested and found guilty by a Republican Court, were deported.”

Crown forces also used these tactics of war extensively to terrorise and target Republican women and their families. The witness statements of Cumann na mBan members Peg Broderick-Nicholson in Galway, Elizabeth Bloxham in Wexford and Mary Alleway in Cobh, all detail hair-cutting assaults.

Other types of interconnected violence targeted at women, including sexual violence, are identifiable, even though much of this was hidden or covered up. In the context of revolutionary Ireland, any evidence of sexual crime was inevitably going to be underreported and indeed kept ‘secret’ as is noted on the top of a file containing a Court of Inquiry in Kew archives in lieu of an inquest report of 1921.

Kate Maher was found dead in Dundrum, Co Tipperary on December 21st, 1920, after spending an evening in the local pub with a group of British soldiers from the Lincolnshire regiment, including a Private Bennett. Maher was an unmarried mother of one, aged 45 at the time of her death, and worked as a servant for a local farmer. Serious wounds were recorded in the investigation file (only opened in 1980), and no one was found guilty for her murder. The file marked “Secret” at the top states:

“The court declares . . . That the cause of death of the said deceased was fracture at the base of the skull accelerated by haemorrhage from and around of the vagina . . . That such wounds were caused by some person or persons unknown . . . and that such person or persons unknown are guilty of manslaughter . . . I concur. There is no direct evidence to connect Pte Bennett or any other soldier with this woman’s death except that he was found near her and other officers had been seen in her company. Signed 5/1/21.”

Another such assault was the case of pregnant Norah Healy in Cork city, who wrote in a letter of complaint that she was raped by a drunk British soldier in her home in April 1921. Other cases indicate the deployment of hair-cutting was a type of warning for worse to come, including rape. One reported case was written into a diary of activities of the Manchester Regiment (based in Ballincollig, Co Cork) entry for November 29th, 1920: “A young woman was held up by two uniformed men near Ballincollig at 21.00 hrs and raped. As she had been threatened with ‘bobbing’ [hair cut short], this is thought to be the work of the rebels.”

An additional example is the case of Bridget Noble, recorded in Cork’s War of Independence Fatality Register: “At one point, after she had returned from a hospital visit, her hair was ‘bobbed’ or shorn, as a punishment ordered by the local IRA battalion. Subsequently, her house was searched [after a military raid] by order of the captain of the Ardgroom Volunteer Company, and in this search part of a letter from the RIC head constable in Castletownbere was found, along with five half-torn letters from other RIC members and two photographs of RIC men.”

Full consideration of the violence women experienced in the War of Independence raises provocative questions concerning ethical remembrance, the history of violence in Ireland’s revolution inclusively understood, and the importance of recognising sexual and gender-based violence as a real and critical aspect of all conflicts and wars, including in a moment of national commemoration.