‘The septic tank? The amount of bodies? It was heartbreaking. I wanted to do something’

'Cellar Door' directed Viko Nikci tells the story of young woman Aidie (Karan Hassan) as she searches for her son while in the grip of the Church. The film was inspired by Magdalene laundries and Tuam babies scandal. 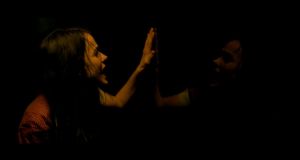 Cellar Door: ‘It’s as if Darren Aronofsky made a film about the Magdalene Laundries.’

We should have seen Cellar Door coming. Focusing on a young woman as she searches for the child who may have been taken by the Catholic Church, Viko Nikci’s experimental horror – little is certain here – plays like a cinematic response to the clerical abuse scandals that have rocked Irish society in the current century. The threat comes from an institution that was once the most powerful in Irish society.

“I knew it would get categorised as a Magdalene Laundries film,” Nikci says. “It is and it should be. But it is looking back at it through a very subjective point of view.”

In fact, it was the revelations concerning the mass grave at the former mother baby and home at Tuam that kicked Nikci into action.

“I was very moved by that story as a lot of people were. It was one part of a whole culture,” he says. “The septic tank? The amount of bodies? It was just heartbreaking. I wanted to do something that was not directly about it, but addressed that. David Collins, who was a producer on the film, said: ‘It’s as if Darren Aronofsky made a film about the Magdalene laundries.’ That’s valid to an extent.”

What we may not have expected is the particular perspective that Nikci brings. Trim and neat with startlingly even teeth, the director – who must be a few years older than he looks – speaks with an accent that mixes smaller portions of Ireland in with a large dollop of the US and a hint of somewhere European. It transpires that he was born in Kosovo and largely raised in New York.

“I grew up in an Albanian household in Brooklyn,” he says. “Very much European. You can hold on to your nationality there.”

One inevitably wonders how the terrible war that ravaged Kosovo in the 1990s affected his family. Few Kosovans survived those years without some personal tragedy.

“Half of my family got out before the conflict started,” he explains. “My father was a professor and a political activist. He left in 1984, which was when we left. My father’s family were from the city and my mother’s were from close to the border with Albania. So my father’s family had more opportunity to leave. They settled in New York. My mom’s family were there until the war and were then forced them to scatter.”

Nikci and his family thus remained connected to their heritage. Every nation has its “community” in New York City, and Albania was no exception. Like so many young immigrants, the young Viko adapted and learned English, but he wouldn’t quite describe himself as an American. Meanwhile, as the dissolution of Yugoslavia loomed, Kosovo became increasingly hammered.

“My mom was back one year – I guess the late 1980s or early 1990s – and was badly beaten by the police,” he says. “From the 1980s it was like the hedge schools in Ireland back in the day. No Albanians in the civil service or as police officers.”

When I ask what eventually brought him so suddenly to Ireland, Nikci grins and says: “What do you think?” The rhetorical question presumes (as you guessed it would) the answer: “love”. In the late 1990s, Nikci was working with the Irish Repertory Theatre in New York when he encountered a young Irish woman on a J-1 visa. Events progressed at what sounds like a dizzying pace.

“We moved in together after a few days,” he says “I asked her to marry me after a few weeks. Here we are 20 years later with three kids. We lived in New York for a while and then moved back. We were in LA for a while. We now have roots here.”

Nikci politely describes how, when he arrived in 1998, he was struck by the mono-cultural nature of Ireland. I dread to think what he’d have made of the place 10 years earlier. By the millennial years, the country was already drifting towards the more diverse nation we have now. He is, however, right to suggest that the pace sped up in the succeeding decade.

“At that time, people my age still had connections to the church,” he says. “People were still baptising their kids. Now very few of my generation are doing that.”

We’ll see about that.

Anyway, Nikci was in an ideal position to observe a changing nation. He describes how “as a white guy who can pass for Irish” he can slip into taxis or restaurants and observe like a native. Having shot films as a kid in New York and worked on a few sets, he was in a position to get aboard the rising Irish film industry. His excellent short Take It Back got him noticed in 2004. He became involved with the Factory, the film-makers’ collective that operated on Grand Canal Dock for a few busy years. Barry Keoghan and Jack Reynor were among those who passed through its doors.

“It’s hard to claim the people who came through,” he says. “We like to think they’d have found a way anyway. If there was a rung they’d jump over it. The Gaiety School? All these entities helped. When we were starting we looked to the Actors Studio in New York. It felt like a hub. It felt like a community.”

Economics eventually did for that space, but not before it had exerted a significant cultural influence. Meanwhile, Nikci was pursuing his excellent documentary Coming Home. A prizewinner at the Galway Film Fleadh in 2013, the film followed Angel Cordero, a New Yorker wrongly convicted of attempted murder, as he made his first steps into freedom after 13 years in jail.

Despite the real culprit confessing, Cordero was, as the film screened, still fighting for exoneration. Nikci’s documentary helped forward that process by attracting the attention of the Innocence Project, a prominent legal organisation committed to exonerating wrongly convicted people.

“Funnily enough it was the trailer that did it,” he says. “They take DNA cases. They take death-row cases. But Cordero, having been released after serving his time, was just not a candidate. We needed a trailer for the film. I cut it myself. We went into their offices and played it. The trailer was two minutes and, when it finished, I turned around and they were all in tears.”

Nikci’s next script, set in Sarajevo, takes a satirical approach to that city’s miseries as it touches upon Bosnia’s first ever appearance at the Eurovision song contest in 1993 (yes, the one in Millstreet).

Before then he has to set Cellar Door loose. It’s a strange, challenging film. Featuring a strong lead performance from Karen Hassan and reliable support from Catherine Walker and Mark O’Halloran, the picture zigzags through time as the protagonist seeks to make sense of her child’s disappearance. Ambiguity is not in short supply.

“I am resigned to that,” he says. “In cinema confusion is death. Right? That’s what you fight against. But when we leaned into that I think we got a better film.”

It says something about changes in the country that there has been little objection to the fearsome depiction of the Catholic Church. These sorts of stories really were inevitable. Have there been any complaints?

“No. No. But there should be, he says. “I hope people will take offence. That’s the bait in art.”

Fate has been duly tempted.

Five films about “the Nuns”

Nuns have appeared in horror since gothic potboilers of the 19th century, but cinema has had its fair share of nice sisters. Here’s a balanced selection.

Sr Mary Benedict in The Bells of St Mary’s (1945)
It’s the film Michael and Kay go to see the night Don Vito gets shot in The Godfather. Ingrid Bergman disagrees with Bing Crosby. A good nun.

Sr Ruth in Black Narcissus (1947)
Deborah Kerr’s Clodagh is the protagonist, but everyone remembers Kathleen Byron as the deliciously deranged Ruth. A bad nun.

Sr Luke in The Nun’s Story (1959)
There was a lot of sweaty tension between Dr Peter Finch and Audrey Hepburn’s nursing nun, but she kept her habit on and left in a pure state. A good nun.

“Sr” Mary Clarence in Sister Act (1992)
Okay, this is a complete con, but we can’t leave out Whoopi Goldberg on her witness protection programme. A good “nun” (on balance).

Valak in The Nun (2018)
The recent horror wasn’t subtle, but Bonnie Aarons turn as a demonic nun helped it to millions. A very bad nun.

Can a work of fiction about the Holocaust be inaccurate?
5