Destroyer: Nicole Kidman is too perfect to convince as a drunk detective

Review: Even great make-up cannot enable the porcelain actor to fully disappear into the role 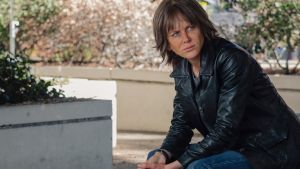 Detective Erin Bell (Kidman at full stretch) staggers, still drunk from the night before, on to a sunny southern Californian crime scene. She recognises the victim and, following some ridicule from her attending colleagues, staggers away in the opposite direction.

Later she receives a dye-stained note in an unmarked envelope. It’s more than useless money.

A sluggish screenplay by Phil Hay and Matt Manfred flips between the contemporary ragged Erin and her lone wolf investigation and a bank robbery committed 17 years ago by a gang she and an another undercover operative (Sebastian Stan, understated and completely wasted here) had infiltrated.

Destroyer really wants to be a blazingly lit, free-wheeling noir in the style of Robert Altman’s The Long Goodbye. Julie Kirkwood’s incredible cinematography helps the cause, as does Theodore Shapiro’s impactful score. Sadly, the film is too muddled, overly serious, and wholly implausible to fly.

The bank robbers, as led by the normally reliable Toby Kebbell, hang out like they’re in the Scooby Doo gang. The heroine’s investigation is so far beyond legality, every scene leaves the viewer to ponder how she’s not in jail yet. A subplot involving her estranged and rebellious teenage daughter seems to exist solely as a means of heaping more misery on an already flat and joyless central character. The big reveal is unlikely to surprise anyone.

Kidman convincingly affects a broken monotone and an uncertain gait, but even the transformative, discolouring efforts of Oscar-winning make-up artist Bill Corso (Deadpool, Blade Runner 2049, Foxcatcher) do not enable her to truly disappear into the role.

Director Karyn Kusama burst on to the film-making scene with the hard-hitting Girlfight in 2000. Destroyer is a stronger, better picture than some of her previous projects (Æon Flux, Jennifer’s Body) but she has yet to surpass the dizzy heights of her debut feature.

Brigitte Nielsen on giving birth at 54: ‘I was trying until there were no embryos left’
6