The trouble with two movies about the Utøya massacre

Studios often copy each other. But will a double revisiting of the Breivik killings test Norway? 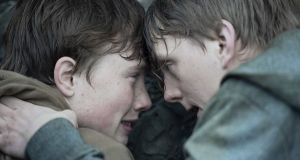 Do you like Robin Hood? You had better. Seven Robin Hood movies are in development, including Marian, with Margot Robbie, Robin Hood Origins, with Taron Egerton and Jamie Foxx, Disney’s Nottingham and Hood, Dreamworks’ Merry Men and a still-untitled Warner Bros project. Remember the great Hood stand-off of the early 1990s, in which Patrick Bergin’s rendition took on the collective might of Kevin Costner and that ubiquitous Bryan Adams dirge? Like that. But bigger and stupider.

It is not uncommon for Hollywood studios to crib off their neighbours’ homework, especially when that homework is not bound by exclusive intellectual property rights. The phenomenon of twin films – movies with a similar theme or storyline released in the same year – is as likely to occur in the prestige sector (remember the two Capote films of 2006) as it is during popcorn season, a time when samey tentpoles throw down (see Olympus Has Fallen versus White House Down or Armageddon versus Deep Impact).

Sometimes a raft of multi-origins duplicates occur: it seems most unlikely that Werner Herzog shot Nosferatu the Vampyre to get in ahead of John Badham’s fabulous laser version of Dracula or the George Hamilton-headlined spoof Love at First Bite; all three films were released in 1979.

It’s a story that speaks to all of us because of what we’ve been seeing over the past 10 years. The vigorous, dynamic growth of the violent far right

Poppe was careful to reach out to the national support group for victims of the July 22nd attacks to discuss his plans to make the film. During production the film crew made use of loudspeakers to mask the sound of gunfire so as not to further traumatise the local population.

Speaking at the world premiere at the Berlin Film Festival earlier this year, Utøya survivor Ingrid Endredrud characterised the film as educative and cathartic: “This film is so important because it captures what right-wing extremism can lead to,” said the 24-year-old. “This is hate in its purest form and as a society we have to stand together against it.”

Not all of the survivors are inclined to agree. Writing for the NRK website last year, Utøya survivor Kent Rune Pedersen said that when he learned of the making of the film, it was like being hit with a fist. “There’s always something on the news, be it Breivik’s ancestors, memorials, July 22 reports, or films to be made,” wrote Pedersen. “July 22, 2011 is not a retired stage for me. I live constantly with the nightmare – every day. With flashbacks, with dreams, sounds, scream and pictures. This is my drama and my reality six years after a terrorist turned our lives on their heads.”

Ironically, Poppe’s film is closer in tone and form to Paul Greengrass’s classic terror recreations Bloody Sunday and United 93 than Greengrass’s own Utøya dramatisation, July 22, released on Netflix earlier this month. The film is very different from its theatrical rival, as it features Breivik – who remains off-screen in Poppe’s film – as a character. Early scenes follow the mass murderer (played to chilling effect by Anders Danielsen Lie) as he prepares his equipment before landing on the remote island of Utøya where he embarks on a shooting spree while shouting nonsense about liberals and elites.

Greengrass is equally concerned with the aftermath of these events, and accordingly switches focus to Breivik’s conflicted legal defence Geir Lippestad (Jon Øigarden); and Viljar Hanssen (Jonas Strand Gravli), a teenager who survived multiple shots and who went on to testify at Breivik’s trial.

“It’s the inspiring story – the universal story – of how Norway responded,” says Greengrass. “It’s a story that speaks to all of us because of what we’ve been seeing over the past 10 years. The vigorous, dynamic growth of the violent far right . . . People go on a journey towards meaning, they want to know why it happened, they want to know what it means, but most of all, they don’t want it forgotten.”

It’s an imperfect picture, not least because it allows space for Breivik to characterise as the first shots of a coming racial conflict. “I’m not a monster in a nightmare but a soldier in a war,” he raves.

Both films, however, have rightly reignited older debates around the docudrama sub-genre. Even when the dramatisation is wholly accurate and credible (and unlikely to prejudice a legal case), there’s a minefield of attendant ethical issues. How soon is too soon for a movie? Is forensic recreation a fitting memorial to victims of a historical atrocity or is it crass exploitation? The same hybrid form can, admittedly, reshape the most unpalatable events into a less unwieldy narrative that may, potentially, have a greater reach and emotional impact than news coverage.

Regardless of one’s ethical scan of either or both of the rival Utøya projects, between the fictionalised characters of Utøya: July 22 and the English-speaking Norwegian cast of July 22, they make for uneasy entries in an already uneasy medium.