Actor calls Woody Allen a ‘genius’, saying he would work with him again immediately 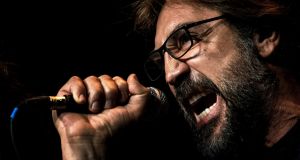 Javier Bardem during a masterclass at the Lumiere 2018 cinema festival in Lyon. Photograph: Jeff Pachoud/AFP/Getty Images

The Oscar-winning Spanish actor Javier Bardem has spoken out in support of Woody Allen, who has faced accusations of sexual abuse made by his daughter, Dylan Farrow. Allen directed Bardem and his wife Penélope Cruz in the 2008 comedy Vicky Cristina Barcelona.

Bardem’s comments emerged from a masterclass at the Lumiere festival in Lyon, France. The Spanish actor, who also appeared in the 007 film Skyfall and won an Oscar for best supporting actor for the Coen brothers’ No Country for Old Men, said he would be happy to work for Allen again.

“At the time I did Vicky Cristina Barcelona, the allegations were already well known for more than 10 years, and two states in the US deemed he was not guilty.”

He added: “If the legal situation ever changes, then I’d change my mind. But for now I don’t agree with the public lynching that he’s been receiving, and if Woody Allen called me to work with him again I’d be there tomorrow morning. He’s a genius.”

Bardem’s attitude contrasts strongly with a number of high-profile actors, including Colin Firth, Greta Gerwig, and Timothée Chalamet, who have said they regret working with Allen and won’t do so again, following a newspaper article in 2013 by Allen’s daughter Dylan Farrow in which she repeated accusations of child sexual abuse by her father, alleged to have taken place in 1992. Allen denies all the allegations. An investigation by the Child Sexual Abuse Clinic of Yale-New Haven Hospital in Connecticut concluded in 1993 that no abuse had taken place, and New York state’s Department of Social Services cleared Allen later the same year following a child welfare investigation.

Allen, meanwhile, has said that he intends to keep working despite the hostility of large sections of the film industry. Page Six, the New York Post’s gossip section, reported Allen as saying: “I’m a writer. It’s what I am. What I do. What I always will be. I’ll write. Since I continually have ideas it’ll be new ideas and I’ll write new things.”

Allen’s most recent film, A Rainy Day in New York, has yet to secure a release date. – Guardian