Review: The director of ‘Gomorrah’ tells a poignant story of small town life under the mob 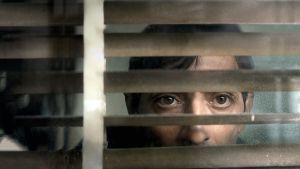 Marcello (Marcello Fonte) is a small, timid, kindly man who runs a dog grooming parlour on a largely abandoned sweep of the southern Italian coast. In his spare moments, he plays football with the men who run similarly tatty businesses nearby and he sells cocaine to pay for the holidays he takes with his young daughter.

The neighbourhood is routinely terrorised by a coke-addled ex-boxer named Simone (Edoardo Pesce), a monstrous variant of La Strada’s Zampanò, who rips out slot machines when they dare to withhold his money.

Despite his low-level drug peddling, Marcello struggles to do the right thing

The locals, who represent an even lower rung of mob-connected life than the footsoldiers and bottom-feeders depicted in Matteo Garrone’s international breakthrough, Gomorrah, talk about putting a hit on Simone. Marcello, however, tries to calm him down and win his approval, a relationship that will see him dragged further and further into Simone’s ill-thought and sometimes psychopathic criminal schemes.

Fonte, who was deservedly named best actor at Cannes earlier this year, brings an unforgettable pathos to his wronged beta-male hero. With a doleful expression pitched somewhere between Peter Lorre and Charlie Chaplin, Marcello coos and dotes on his animal charges. He delights in his daughter.

Despite his low-level drug peddling, he struggles to do the right thing. One sequence, in which he is dragged along on a house burglary, sees him risk everything by returning to scene of the crime in order to rescue the dog. It takes an incredible degree of thuggery to make Marcello snap at Simone, but the latter, as imposingly essayed by Edoardo Pesce, is an incredible thug. Dogman may be the name of Marcello’s establishment, but it equally prefigures his bite back.

The surrounding ghost town, the ghostly coast and Nicolaj Bruel’s rusted cinematography lend an even greater poignancy to Garrone’s very Shakespearean tragedy, and usher in a discombobulating and surreal final act.