Bohemian Rhapsody: A kind of magic. Start engraving that Oscar 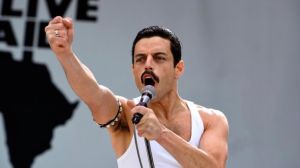 Squabbling is a defining characteristic of Bohemian Rhapsody, which blazes through Freddie’s life in a series of agreeably cheesy vignettes: Freddie’s Parsi origins and disapproving dad; his lifelong love for Mary Austin (Lucy Boynton); the tours, the parties, the loneliness between; the hangers-on; and various eruptions of creative differences with the band.

Speaking of which, the directing credit on this famously “troubled production” reads Bryan Singer, although that filmmaker left during the shoot. Dexter Fletcher was drafted in to steady what looked to be a sinking ship and those familiar with his feelgood milieu, particularly the sporting underdog comedy Eddie the Eagle and The Proclaimers musical, Sunshine on Leith, will sense his welcome presence at the tiller.

In common with The Proclaimers film, this is very much a jukebox musical which rests entirely on the viewer’s tolerance (or love) for Queen’s music – don’t like the band; nothing to see here – and Rami Malek’s appropriately majestic performance.

The rest of the ensemble do well enough with a compressed screenplay credited to Anthony McCarten (from a story by Peter Morgan), but it’s Malek who brings depth and darkness to what could have been a superficial enterprise. His Mercury is fun, flamboyant, brilliant and unexpectedly tragic long before he is diagnosed with Aids.

For all the kerfuffle surrounding the trailer and subsequent allegations of queer or bi-erasure, Bohemian Rhapsody is as frank about Mercury’s sexuality as a film rated 12A (or PG13 in the US) can be. His HIV diagnosis and relations are sensitively handled.

The final scene, a flawless, moving replication of Queen’s entire 20-minute set from Live Aid, is absurdly impressive, with Malek channelling Mercury as a geomagnetic storm. A kind of magic. Start engraving that academy award.