The Script: ‘Find a band who sing as honestly as us. I dare you’

What do they think of people who say they’ve sold out? ‘F**k them’ 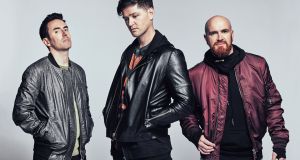 The Script: armed with a noble cause and a large platform

Adapt or die. Darwin said it, Brad Pitt in Moneyball said it, and now The Script are saying it, ready with an album intended for the streaming generation. More specifically, it’s Mark Sheehan bearing the words, supported by an “abso-f**ckin-lutely” from Danny O’Donoghue, as we meet in a private room at a London restaurant.

It’s the first time I’ve met the trio, including drummer Glen Power, since their 2014 album No Sound Without Silence, and the shift isn’t only in the songs. They still race their words and talk over each other, enthused to tell you, and thus me, about album number five. But they’re noticeably calmer while at it. They’re not a band who have much more to prove, with an unbroken record of Irish number one albums, 29 million records and 1.4 million ticket sales under their leather belts. And there is, of course, O’Donoghue’s prolific spell as judge on The Voice to assure them of their place on Spotify playlists.

So older, wiser and more famous, they’re using their position to change. Previously the beholders of glossy rock and oversized choruses delivered with textbook production, judging by the six of the 14 songs from Freedom Child we’ve heard, their sound now takes in acoustic sounds, dancehall groove and a tinge of EDM.

“We have to adapt because the landscape of music is changing so much, particularly for bands,” says Mark Sheehan. “Streaming has changed how we’re experiencing music. A lot of people are listening through their phones and using earphones, and a hit song is just a song that becomes popular, and you don’t really hear its genre. So it’s a new generation for music.”

Lyrically too, they’ve moved from singing about personal experiences, as with If You Could See Me Now and Hall of Fame. The album often focuses on the world we live in today: the message is to stay united, and live our best lives in the face of terrorism.

O’Donoghue, now based between London and LA, picks up the point, citing new song Divided States of America as the example. “We were in America when Trump’s inauguration was happening, and you couldn’t walk down the street without seeing how divided America was. The guy selling cigarettes could be a Democrat and the guy he’s selling them to could be a Trump supporter. We wrote with three or four different producers and writers, and some of them would leave the session to go to a march. It was all around us.

“We wanted to write a song that said we’re not on the red or the blue side, but f**k me, we all have to show a massive amount of tolerance here. Instead of sitting in your echo chamber, you need to hear someone else’s side of the story.”

To help them in their aim of making an album for the times, a number of collaborators were brought in including Nasri, Toby Gad (who wrote Beyoncé’s If I Were a Boy and John Legend’s All of Me), and members of Max Martin’s hit factory.

“We’re trying to make a modern record,” says Sheehan. “As little sponges, we are taking everything in and we want to sit amongst our peers.”

The peers aren’t only the biggies, the Ed Sheerans and Drakes of the world. They’re also aware of new acts nipping at their heels, like compatriot Niall Horan who’s embarking on his first solo tour at the same time as Freedom Child’s release. How do they think the 1Der will fare on his own?

“I think he’ll find out what he’s made of, that’s what I think,” says O’Donoghue. “Every time I’ve met him, he’s been a really nice guy, but there’s nothing like starting again to see what he’s made of.

There’s a mirror in their own beginnings: 15-odd years ago, O’Donoghue and Sheehan were in a boyband too, returning as The Script with a more mature offering. Even at their start, they weren’t shy about their ambitions: their self-titled debut – with singles like Breakeven and We Cry – were specifically produced to slot nicely alongside Stateside radio. And it worked. But given this refocus now they’ve established their sound, I broach the subject of those who think changing to keep relevant is…“selling out?” helps Sheehan.

“F**k them,” he says without hesitation. “Tell them to try and have a long career and stay in a band for this long and get to album number five. They’re usually the type of guys that have one-hit wonders, and they’re down the pub playing to f**king three people. I couldn’t give a s**t,” he says. “Our whole MO is to make great music and enjoy ourselves. That’s the view you should be taking, not try to write the anti-record so no one is singing them.”

“There’s a thread of honesty with Freedom Child I wish I heard in other people’s music,” adds O’Donoghue. “I can count on one hand the amount of bands that are willing to stand behind their own messages. Granted, Rain isn’t a massively socially conscious song, but it’s your first hook into the record, which is about tolerance, about where we are in the world. I dare you try and find another band who will talk just as honestly – singing and rapping – about the state of the world, and posing genuine questions this generation has about the way society’s gone.”

Armed with a noble cause and a large platform, they’re readying themselves to preach the good word. A low-key tour at the end of summer marks their live return, but given that their last Irish show was at Croke Park to a capacity crowd, expect them to sell out. In the good way, of course.

While The Script have evolved their sound in Freedom Child, other artists have gone all-in with a mid-career change in direction. Here are some notables who’ve defied expectation.

Once the box of “awesome punk band” was ticked, in a move that no one saw coming, The Bronx turned their attention to mariachi music. Thankfully for those needing to know the expected sweat levels at their shows, they differentiate their acts with the alter ego Mariachi El Bronx.

Plenty to do with the turbulent five years since she last graced the spotlight, Kesha’s forthcoming album Rainbow sees her less interested in frivolous pop than weighty, emotionally-revealing pieces.

Weeks before his tragic death, Chester Bennington’s band released their seventh album One More Light, which saw them move from their signature rock-rap hybrid and embrace chart music instead.

Mocked as a haircut NME band, back when NME bands were a thing, the depth and talent in second album Primary Colours forced many to eat their own words.

The Oxford group did well on the indie circuit with the promising Pablo Honey and the fully-formed The Bends. Then they only went and released OK Computer, changing the face of music as we know it.