The Boy and the Beast review: An elaborate, unique cinematic talent 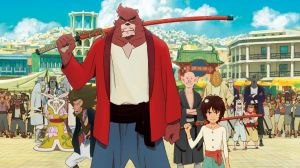 The Boy and the Beast: an orphaned nine-year-old escapes the streets of contemporary Tokyo into Jutengai, the mythical kingdom of the beasts

Film Title: The Boy and the Beast

Orphaned nine-year-old Ren (voiced by 29-year-old actress Aoi Miyazaki) escapes the streets of contemporary Tokyo into Jutengai, the mythical kingdom of the beasts. There he becomes disciple to the boorish, ursine Kumatetsu (Koji Yakusho), one of two anthropomorphic animal candidates poised to inherit the realm’s throne when the current Lord (Masahiko Tsugawa) reincarnates as a deity. Ren – renamed Kyûta by his master – becomes a promising martial artist and decent young man. Complications arise, however, when he discovers the route back to the human world.

The residents of Jutengai warm to the interloper-hero, despite their collective fear of the “darkness of the human heart”. That darkness – and a riff borrowed from Moby Dick – powers along an entirely surprising third act as Kyûta seeks out the mysterious son of Kumatetsu’s chief rival.

Mamoru Hosoda first emerged as a key animator on Dragonball Z and the director of Digimon Adventure. Few could have guessed watching those relatively unsophisticated smash-‘em-ups that the filmmaker, who studied oil painting and fine art, would graduate on to such splendid looking, emotionally involving and cerebral science-fiction as The Girl Who Leapt Through Time and Summer Wars. In common with the wonderful Wolf Children (2012), The Boy and the Beast sees the director reconfiguring mythology, bildungsroman, and the traditional kendo movie.

Ironically, Hosoda, who was once attached to Howl’s Moving Castle, has come to be regarded as the new Hayao Miyazaki. It’s rather more accurate to say that Hosoda, a unique cinematic talent, is the new Hosoda.

Utilising The Boy and the Beast’s imaginatively rendered parallel worlds, the director explores loyalty, familial bonds, prejudice and depression. There are old-school martial arts showdowns and irresistible echoes of The Karate Kid and The Jungle Book as Kumatetsu and Kyûta improve one another. There are even – anime geek alert – nods to Digimon, the show that marked Hosoda’s breakthrough. These familiar beats cunningly coalesce into an elaborate plot, set to Takagi Masakatsu’s bustling score.

This crisis offers a chance to know ourselves better
9