Reagan, ‘Ghostbusters’ and ‘Thriller’ all star in this geekcentric version of the 1980s

The new instalment of the popular Netflix series arrives on 27th October. 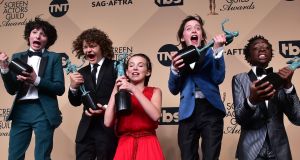 The annual Nerdenberg Rally that is Comic-Con has just ended in San Diego. The event is (away from the actually comic fair stuff) a huge promotional beano that allows multinational entertainment corporations to “drop” trailers on fans who, after sucking up every clue to the plot of Super-Thing, go on to spend the remaining months before release complaining about “spoilers”.

I have never been. It may well be great. If anyone wants to send me I’m prepared to change my mind.

Anyway, two of the most highly anticipated trailers confirmed popular culture’s continuing nostalgia for the Reagan years. No surprise. That was the point at which the big action and science fiction behemoths captured cinema. Without The Age of Spielbergia there would be no Comic-Con.

Speaking of Spielberg, the trailer for that director’s Ready Player One – adaption of a fine science fiction book by Ernest Cline – groaned with references to his high period. The DeLorean from Back to the Future was there. You could also make out references to Tron and Nightmare on Elm Street.

That film won’t be with us until next spring. The sequel to the TV series Stranger Things hits Netflix at Halloween, and its fans are already Upside Down with excitement (get it?).

The series has to satisfy all kinds of retro-desires. It has to follow on satisfactorily from the first series and offer further investigations of the scary shadowy world that exists just beneath our own. Just as importantly, it has to satisfy the apparently unstoppable addiction to all things 1980s.

That last requirement is certainly addressed in the promo. We begin with one of the era’s most unsatisfactory technological inclinations to the future. Dragon’s Lair failed miserably to incorporate Hollywood-standard animation within an arcade game. It was the hi-tech version of those kids’ books that asked you make your own decision as to which page you would jump to after encountering a mystery.

That is in there. So is a reference to the election that saw Ronald Reagan grind Walter Mondale’s face in the dirt and pull his underpants up to his unhappy Minnesotan shoulders. God, this was an awful time. Why do we insist on going back to it?

We’re not going back there, of course. We’re going to a contemporary geek-friendly version of it. Just look at the kids wandering around dressed as the Ghostbusters.

It’s true that American children seemed to have everything in those days, but I don’t remember any young person wearing costumes that elaborate. “These guys were cosplaying before cosplaying was cool!” Den of Geek tells us in its analysis of the trailer. “Cool” clearly has its own eccentric meaning in the Republic of Geekistan.

The referential, nostalgic wheels within wheels reach their height when we hear snatches of Vincent Price’s spoken sections from Michael Jackson’s Thriller.

Let’s take a pill and consider this. Stranger Things is recycling a song that used an ageing horror star to remind contemporaneous listeners of shockers from an era that was already decades distant. Can’t we have “now” back?

The trailer is necessarily more cautious about confirming how its own-brand Steven Cing plot will continue (any similarities to Stephen King are entirely accidental).

Winona Ryder is back, surrounded by the few bits of scenery she didn’t chew to matchsticks in the first series. The outsider kid known as Eleven is there to confuse her pals further and this time she’s all in blue. Some giant spidery creature looks to have emerged from the Upside Down with malign intentions for the town of Hawkins.

There is bad news for optimistic friends of poor misused Barb. The vanished teenager does not appear in the trailer and, at Comic-Con, Sharon Purser, who played that archetypal “best pal”, stated categorically that she would not return. Then again, she would say that. Wouldn’t she?

This is how marketing works now. The trailer confirms that the series will conform to its own industry standards. It tantalises. But it doesn’t spoil. Look away now if you don’t want to know what happens to the Berlin Wall at the end.