Ethan Hawke: ‘It’s a dance with fire. I saw that with River’s death'

Hawke was a posterboy for generation X actors. But after seeing first hand where his precocious talent could lead, he's become a thoughtful veteran of the Hollywood machine

Maudie, directed by Aisling Walsh, starring Sally Hawkins and Ethan Hawke is the story of the life of artist Maud Lewis, who painted in Nova Scotia. Courtesy: Sony Pictures 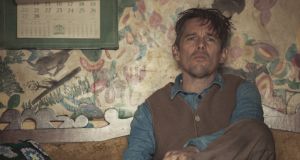 Time is always at our elbow.

Ethan Hawke, who has changed little in 30 years, is at the Soho Hotel to talk about his role in Aisling Walsh’s irresistible new film, Maudie. Still neatly bearded like a latter-day beatnik, he is also happy to talk about the perils of childhood stardom, the pains of divorce and the tyranny of event cinema. It’s been more than a decade since we met for a radio broadcast in Dublin.

“My daughter is over there now, shooting something,” he says merrily. “The BBC are doing a remake of Louisa May Alcott’s Little Women.”

Is that possible? I guess she’s playing one of the littler women.

“She’s 19 now,” he says with a shrug. “It’s an Irish blessing to have her first job be there. I had such a good time when I was there.”

Yes, I suppose Maya Hawke, daughter to Hawke and Uma Thurman, probably is old enough to play Jo March. Thurman and Hawke married in 1998. They separated in 2003. By that point Hawke had been acting for nearly 20 years. His first role was opposite River Phoenix, in Joe Dante’s Explorers. That was 1985. Hawke then went through a quiet period before, at the age of 18, breaking through as one of the young ensemble in Dead Poets Society.

It’s not a good thing for a child to have coffee brought to them by an adult. It’s a dance with fire. I witnessed that with River’s death

“Parents are often flattered when people want to photograph their children,” he says. “There has never been a child whose life has been enhanced by that. It’s a destructive thing. It worked out okay for me. It’s not a good thing for a child to have coffee brought to them by an adult. It’s a dance with fire. I witnessed that with River’s death.”

Phoenix died in 1993, at the age of 23. His death has become a legend to warn young actors away from fame’s more perilous shores.

“I think it had to do with coping with the pressures of child acting,” Hawke says sadly of his late friend. “It’s very difficult to grow up in that environment.”

Hawke did not feel under quite that degree of pressure. But it was a tricky upbringing. His parents, who were students when he was born, divorced four years after his birth. His mother moved around in his early years before coming to rest in New York City. She remarried when he was 10, and they took themselves to New Jersey.

It’s worth pondering all this when watching his performance as the dad in Richard Linklater’s Boyhood. Shot over 10 years, the film followed a kid, the son of a divorced mother, from a troubled childhood to an awkward adolescence. There’s something of Hawke in his own role; divorce and separation from his children came early in the lengthy shoot. But there’s also something of Hawke in the kid.

Explorers, a nifty post-Spielberg science-fiction flick, did not do the business that it deserved, and Hawke found himself kicked back to normality. He fancied becoming a writer and signed up for an English degree at New York University. Then Dead Poets Society intervened. I wonder if his wariness about child acting springs from the disappointment he must have felt after making a false start.

“Yeah. And River did make it,” he says. “So I felt that very intensely. I saw that it was possible and that it hadn’t happened for me. As a young person that was a huge kick in the teeth. I felt that I had failed. But that prepared me.”

Hawke goes on to say that, having failed to make it once, he didn’t absorb the success of Dead Poets Society at first. It took him a few years to believe that he had properly arrived. Hawke’s appearance opposite Winona Ryder and Ben Stiller in Reality Bites confirmed his status as a signature actor of Generation X. (Articles on that phenomenon still use his image as an example of the species.) He had that laid-back charm. He had the affable vagueness.

He and Uma Thurman were among the key power couples of the millennial years. If you wanted a Taylor and Burton for the Generation X set then you needed look no farther

He and Thurman were among the key power couples of the millennial years. If you wanted an Elizabeth Taylor and Richard Burton for the X set then you needed look no farther. It didn’t last. The couple divorced in 2005. In 2008 Hawke married Ryan Shawhughes, who has been his children’s nanny. He has two children from each marriage.

Hawke has spoken gloomily of the years in between. In 2004 he moved to the Hotel Chelsea in New York and began plotting a return to theatre. It sounds a little as if he had an early midlife crisis.

“Yeah, I call those the black years,” he says with a resigned shrug. “It wasn’t that it was hard professionally. It was larger than that: why do anything? My 20s had gone so well my development was a little delayed. My first real taste of failure was not being able to make that marriage work. When something profound like that happens it has a ripple effect in anything.”

Theatre helped him reconnect. So did his continuing involvement with Richard Linklater. Boyhood ticked on. The director’s lovely Before Sunrise, a Brief Encounter-style romance with Julie Delpy, from 1995, led, at almost 10-yearly intervals, to Before Sunset and Before Midnight. Those three films are enough for immortality.

Most romances are written by a man or a woman. They have a female gaze or a male gaze. But in those films Rick gets us both in the room, asks us questions, and sparks fly

“I’ve got a theory about the Before trilogy,” he says, leaning in conspiratorially. “Most romances are written by a man or a woman. They have a female gaze or a male gaze. There is usually something that keeps the other gender away. But in those films the authorship is divided between us. Rick is wrangling us. He gets us both in the room, asks us questions, and sparks fly. The architecture is both masculine and feminine.”

Now we have Aisling Walsh’s Maudie. The Irish picture details the relationship between Maud Dowley, Nova Scotia folk artist, and her rough-hewn, inarticulate husband, Everett Lewis. Sally Hawkins is heartbreaking as the arthritic Maudie. Hawke has never been better as the sometimes-abusive Everett.

“Unfortunately, I don’t think the level of misogyny depicted was unusual for the time and that sort of person,” he says. “The challenge as an actor is to play somebody who’s abusive to Sally Hawkins and still have people prepared to look at you in the next scene. Particularly when she’s so vulnerable.”

Hawke slips very comfortably into Maudie. He’s no longer playing the goateed kid, but these sorts of independent productions remain his natural home. He must surely have turned down Marvel epics and DC jamborees over the years. Few other actors are quite so wedded to the indie aesthetic.

“I like to work with talented people, and there are definitely very talented people working on this film,” he says after a diplomatic pause. “But that’s not why I wanted to be an actor. It’s not the bass note to my work. That’s not what I am looking to contribute.”

Maybe that false start all those years ago helped develop that commendable attitude.

“I learned not to expect any applause at the end of the show.”

There have been more than a few excellent films about artists. Cinema is a visual medium, after all.

Lust for Life (1956)
Very much an epic in the old school, Vincente Minnelli’s study of Vincent Van Gogh made great use of Technicolor, European locations and a wrought Kirk Douglas.

The Late Late Toy Show: Everything you need to know
10