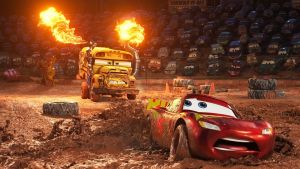 To date, the Cars franchise has produced characters that children respond to, and films they fidget through.

From the sequence’s inception, there has been a strange disjoin between the target teeny demographic and such heavily laboured, age-inappropriate messages as “slow down and smell the roses” and “it’s the journey not the destination”.

In this spirit, the newest instalment offers a stern warning to embrace, not reject decrepitude. Hey kids: Don’t Fear the Reaper.

There’s a strange inconsistency, too, between the hyperreality of the All-American landscapes and sleek, studied machines, and the cartoonish expressions on their windshields.

And then there’s Cars 2, a ghastly mess that saw Pixar indulgently squatting in the sandbox: What if Queen Elizabeth II was a car? What if Mater the Tow Truck, one of the most annoying characters in contemporary cinema, was a spy? For some reason.

Still, in 2011, just as the horrid Cars 2 became the first Pixar film to warrant a rotten score on Rotten Tomatoes, Disney/Pixar announced that the franchise had earned more than $8billion.

Damned right, we’re getting a third one.

The good news is that Pixar appear to have taken Cars 2 to the scrapyard. Cars 3, which picks up where the first, perfectly adequate, film left off, is by far the best instalment in the series. It even has a plot. Mater, happily, has been relegated back to the sidelines, while Kerry Washington’s data analyst provides a sly dig at inaccurate pollsters.

Lightning McQueen (Owen Wilson) is increasingly overtaken by the next generation of high-tech cars, including the cocksure Jackson Storm (voiced by Armie Hammer). These younger whippersnappers are winning by availing of advanced training facilities and by playing the numbers: the Nascar equivalent of Moneyball.

Can they be beaten with old-fashioned gumption and a Rocky-style training montage? Possibly. But there’s a neat twist to Lightning’s latest odyssey. Enter Cruz Ramirez (voiced by the comedian Cristela Alonzo), Lightning’s new trainer and a wheeled, important lesson about male privilege.

The anti-Ghostbusters mob may not be happy, but everyone else should be pleasantly surprised.