‘I felt like his story hadn’t been told,’ Ebs Burnough says about his Truman Capote documentary 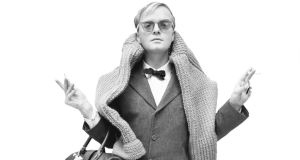 The Capote Tapes features taped interviews utilised by George Plimpton for his definitive 1997 biography of the author Truman Capote.

“Truman invited the doorman from his apartment building, too,” adds Burnough. “There were young people. There were royals. He wanted to create a party that was about the swellest, swankiest, coolest people from up and down the socioeconomic spectrum. But it certainly leaned toward the up on the spectrum. Today’s Met Ball is much more about contemporary culture and your currency in the moment. Truman’s event, with its sense of decorum and style, belonged to another era.”

Growing up in Tallahassee, Florida, Burnough liked to “punch above his weight” as a reader. Aged 12, he was introduced to Capote’s work by a local librarian and immediately recognised the hanging Spanish moss and other Southern Gothic tropes that characterise the author’s milieu. Decades later, his curiosity was piqued while reading a biography of CBS mogul William S Paley. Specifically, Burnough became fascinated by the relationship between Paley’s socialite wife, Babe Paley, and her sometime best pal, Truman Capote.

I started poking around and asking questions. And I realised that despite the two feature films on Truman, neither one dealt with his life; they dealt with the writing of In Cold Blood. I felt like his story hadn’t been told in its totality

“It was a weighty tome,” says Burnough. “And reading about how William Paley built CBS was interesting. But it was like watching Will & Grace. At the end of the day you’re most interested in Karen and Jack. So that got me started. I reread all of Truman’s books. And I knew one of Babe’s daughters in New York.

“So I started poking around and asking questions. And I realised that despite the two feature films on Truman – Capote with Philip Seymour Hoffman and Infamous with Toby Jones – neither one dealt with his life; they dealt with the writing of In Cold Blood. I felt like his story hadn’t been told in its totality.”

Using new in-camera interviews with friends and experts (including Colm Tóibín, who provides intriguing observations into Capote’s state of mind when writing In Cold Blood) and archive footage, The Capote Tapes features taped interviews utilised by George Plimpton for his definitive 1997 biography, Truman Capote: In Which Various Friends, Enemies, Acquaintances, and Detractors Recall His Turbulent Career.

“I had a dogeared and underlined copy of the book,” says Burnough. “And a family friend said: ‘Oh, have you spoken to George’s widow, Sarah? She might have some of the tapes.’ They were in storage in her house in upstate New York. They were cassette tapes. I had to have them digitised. And it was a wonderful gift because it really did help to bring the material to life.”

“It’s a funny thing,” says Burnough. “They are polar opposites but you can see how the bullish, pugnacious Mailer could respect the petite, effeminate Truman. If you put everything aside, it’s darn good writing. I also think Truman was a bit of a fighter himself. He was never afraid to take someone on in an arm wrestle. He had a lot of upper body strength and was a much tougher character than he initially appeared.”

Plimton’s tapes and other testimonies coalesce into a fascinating documentary collage that examines Capote’s impoverished Alabama childhood, his cocaine-fuelled decline, and his family life.

“For me, Kate, Truman’s adopted daughter, was the heart and soul of the movie,” says Burnough. “She provided details about Truman that we otherwise would never hear. In public he was this brilliant intellect, with a rapier wit and a mean queen persona. And Kate gave a sense of the heart and soul behind that persona and his desire for family and what it meant to create a family in an era when you couldn’t as a gay man.”

Truman’s work always took real life and people and extrapolated and layered over real events. But by the end, he was so mixed up with alcohol and prescription drugs and – let’s face it, non-prescription drugs – that he got sloppy

At the centre of The Capote Tapes are unanswered questions pertaining to Answered Prayers, Capote’s notorious tell-all novel. Capote began writing what he hoped would be the American equivalent of Proust’s Remembrance of Things Past in 1958. In 1975 he allowed Esquire magazine to publish two excerpts from Answered Prayers.

One chapter, titled Unspoiled Monsters, featured a thinly veiled and unflattering version of Tennessee Williams. The other delved into the private lives of William and Babe Paley. Babe and many of Capote’s “swans” – the glamorous, uptown women he attended parties with – felt betrayed and were outraged by Capote’s indiscretion.

“Truman’s work always took real life and people and extrapolated and layered over real events,” says Burnough. “He knew he was telling secrets with Answered Prayers and he had gotten away with that before. But by the end, he was so mixed up with alcohol and prescription drugs and – let’s face it, non-prescription drugs – that he got sloppy. If the writing had been a bit more elegant or Proustian, it might have been different. But the invitations stopped coming. At the time, he did connect with Warhol and The Factory and he went on tour with Mick Jagger. But the rock and roll crowd weren’t really his people. His people were society ladies like Babe Paley and Slim Keith.”

Several contributors to The Capote Tapes, including Truman’s daughter, suggest that Capote had finished work on Answered Prayers. The manuscript, however, has never been found.

“I don’t think there is a manuscript out there,” says Burnough. “I do believe he finished it. Because too many people say he did. He was a cheeky enough character that you can see him hiding it somewhere. But he was also very sick at the end. And I can also imagine him having a night alone, doing cocaine and drinking heavily as he did back then, and destroying it.

“That’s my own personal belief. It only took me four or five years of making this film to get there.”

The Capote Tapes is released digitally on January 29th