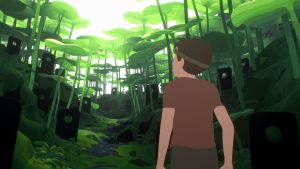 In Away, a boy finds himself on a mysterious island

Here’s a wondrous thing. Working from his home studio, Gints Zilbalodis single-handedly crafted this gorgeous feature-length animation over 3½ years. The 26-year-old even wrote the haunting post-Philip Glass synth score. That alone might distinguish Away as an enchanted object. But the film’s world casts a more potent lasting spell.

An unnamed and unspeaking boy finds himself and his parachute tangled and dangling from a tree above a mysterious island. The animal population, including a faithful yellow bird, a grumpy-looking tortoise, and cats that congregate around a strange, gravity-defying geyser, prove friendly. The gigantic dark monster that seems to absorb and destroy everything it touches makes for a less affable presence.

The lack of dialogue and the propensity for magic recall several Studio Ghibli classics, particularly My Neighbour Totoro and The Red Turtle. But Away is as unique as it is lovely

Zilbalodis wrote the story as he went along, making for a series of eventful chapters and adventures variously titled “Forbidden Oasis” and “Mirror Lake”. The effect is like waking up in a video game. The acquisition of a map leads to a motorcycle. A rickety bridge allows for a trap to use against the monster, which relentlessly pursues the boy with an unnerving zombie pace. Landscapes shift as we float through clouds and wander through tombstone-lined jungle.

The film’s simple geometric shapes, set against hyper-realistic skies and terrain, are remarkably effective. Staring into the same black circle of the yellow bird’s eye as we come to realise that a white fox is prowling nearby makes for white-knuckle tension to rival that of the most stirring action film. A tortoise rolled on to his back allows for another tense escapade.

The lack of dialogue and the propensity for magic recall several Studio Ghibli classics, particularly My Neighbour Totoro and The Red Turtle. But Away is as unique as it is lovely. Goodness knows what Zilbalodis could achieve with a team of animators and writers.

Affordable animation software has allowed for some intriguing web series and hundreds of cheap, nasty, opportunistic kids’ films. Away makes up for the very worst of them.