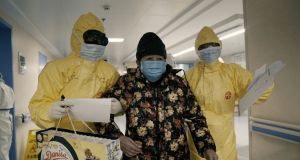 A mobile phone rings in a box of phones that may never be retrieved by their respective owners. A sobbing daughter begs medical staff to see her dead father. The staff restrain her and escort her from the Wuhan hospital. She cries out nonetheless. “Papa, you’ll stay forever in my heart.”

The documentary 76 Days, shot in January and February last year as a city of 11 million went into a 2½-month lockdown and hospitals struggled to cope with the severity of what would become a pandemic, might have been composed entirely of such personal tragedies. In the beginning, as co-director and editor Hao Wu notes, before the hospitals developed a treatment protocol, many of their subjects would disappear during the shoot “as they were moved to other facilities or passed away”.

The film, an early favourite for the Oscars race, is affecting, but it is not a relentless chronicle of personal loss. It unfolds instead like an unnerving thriller as front-line staff, buried under layers of PPE, work tirelessly to save a heavily pregnant woman and her baby and wrangle a grumpy Covid-infected grandpa who refuses to stay in bed. A woman, realising her husband cannot accompany her while she has an emergency C-section, is comforted by nurses: “Don’t worry; so many of us are here for you.” A quarantined baby, nicknamed Little Penguin, is doted on by staff. Jesus and the Communist Party are variously evoked to give comfort to older patients.

Hao Wu, the New York-based director of People’s Republic of Desire and Netflix’s All in My Family, was visiting his parents for Chinese New Year in Shanghai when news of the Wuhan lockdown broke. The celebrations were muted. New Year fell on January 23rd, just three days after the China National Health Commission confirmed that the virus was human-to-human transmissible.

“Shanghai wasn’t under official lockdown but it was shut down,” recalls Hao, speaking via Zoom from his New York home. “Nobody was walking along on the street. Everyone was inside their apartment. But it only felt real to me when it hit New York. I live here. I go out every day. Suddenly, Wall Street and the front of the New York stock exchange is empty. There was nobody there. The city that never sleeps, sleeps for Covid.”

Initially Hao’s efforts to chronicle the virus was an attempt to figure out what was happening. He reached out to film-makers in Wuhan and then elsewhere as the virus continued to spread. An attempt to chronicle Covid in his home city was curtailed as hospitals in New York are, he notes, “Run by giant conglomerates and are concerned with legal liability”.

Perhaps ironically, there were no such issues in Wuhan, where Hao’s collaborators shot every other day: “In China there was a lot of control but the decisions in most circumstances are made very locally,” says Hao. “So even though access to the hospitals was restricted, because my co-directors are both reporters, they could say they have legitimate reason to be there filming. It is up to the hospital chief to decide whether they can go into the contamination zone. And once inside the contamination zone, no one has the time or energy to chaperone them. They could roam freely.”

The footage Hao’s collaborators captured was unique, but it took the rapidly developing pandemic for Hao to realise just how unique.

“The film changed as the pandemic evolved and as my own understanding changed,” says Hao. “In early February I was trying to find collaborators in China, and the story was localised. Suddenly, the story was about the Princess Cruise. Then it involved Japan, South Korea. Then Italy and Spain.

“I got in touch with film-makers around the world. But quickly I realised that’s a dead end because there are so many wonderful investigative journalists. And if they cannot find out what was happening at the very beginning, how could I? It was only after it became a global story that I realised that no one else had captured such precious footage as my two co-directors had.”

76 Days is an extraordinary journalistic feat from Hao, who edited the film from New York, and his two Wuhan co-directors: Weixi Chen, a video reporter for Esquire China, and another young photojournalist who wishes to remain anonymous. The Wuhan camera-people are still weathering the physical and psychological trauma of their experiences at the front line.

“Sometimes, I was just there for emotional support,” says Hao. “The filming process was physically demanding because there were multiple layers of PPE. So,  just like the medical staff, they sometimes just had to lie down because of a lack of oxygen or feeling dizzy. They couldn’t even use the bathroom once they went inside the contamination zone. They had to leave their equipment inside the zone and remove just the memory cards. Otherwise they would have had to disinfect and destroy everything.

“More important was the emotional drain. They very quickly felt powerless, as film-makers watching people die in front of their eyes.”

It was not always an easy relationship between the three co-directors. When Donald Trump and other Americans began using terms like “Chinese virus” and “Wuhan flu”, the PRC-based journalists became suspicious of Hao’s intentions.

“We had only met once on video call,” says Hao. “So we hadn’t yet built up a relationship of trust. It was extremely frustrating because my collaborators got scared and they’re concerned because I’m based in New York and they don’t know how I’m going to use the footage. Am I going to respect their vision? You can tell from their camera work that they are so sensitive and empathetic to the people around them.”

Undaunted, Hao quickly assembled a rough cut in order to assure his co-directors. It took him two years to edit his digital dystopian themed doc People’s Republic of Desire, he notes. 76 Days required two months. The results, he hopes, place emphasis on our common human causes and challenges.

“I’m not a political commentator,” says Hao. “I don’t want to misrepresent China. China isn’t a monolith. The same questions that were asked around the world were asked in China. A lot of people were confused and angry when the lockdown happened. I was talking to my co-directors during the lockdown and we were wondering, how long is the lockdown going to last?

“People were complaining. They didn’t know if the government and the measures being taken were too drastic or draconian. Was it an infringement of human rights to severely limit peoples’ movement? But then we saw other countries, especially the United States, fail so miserably. And then watched China emerge from the pandemic and life going back to normal by the end of the summer, then we need to give credit where credit is due.

“Some people are shocked at how well-managed the hospital is. They shouldn’t be. There were other countries and other hospitals – in Taiwan, Hong Kong and Singapore – that were well-managed throughout the crisis. I think we should continue to investigate what happened at the beginning. But I think we need to learn from each other. America gets so caught up in its own divisions that it creates a kind of tunnel vision. The virus doesn’t care about those divisions. The virus doesn’t care if you are exceptional.

“That’s my creative goal. Watch this film to see how horrible Covid-19 is. Wear your mask. And tell your family and your friends who refuse to wear a mask to watch this film so they know this is real.”