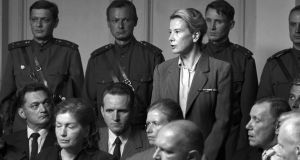 DEAR COMRADES! ★★★★★
Directed by Andrei Konchalovsky. Starring Julia Vysotskaya, Vladislav Komarov, Andrei Gusev, Yulia Burova, Sergei Erlish. VOD, 116 min
Veteran Russian director Konchalovsky delivers a powerful, eerily beautiful drama concerning the 1962 Novocherkassk massacre, in which 26 striking workers were shot by the KGB. The electrifying Vysotskaya plays Lyuda, a dedicated party member who misses the country’s most uncompromising leader. Then her daughter fails to come home. There is so much to savour in this singular, monochrome film, but more than anything it demonstrates how even the firmest conviction can wither when in conflict with personal affection. DC

Fascinating, rage-making documentary on the FBI’s relentless COINTELPRO operation against Martin Luther King. More than five decades on from the events it depicts, the film is so alarming that interviewee James Comey feels obliged to characterise the letter and broader smear campaign as “the darkest part of the FBI’s history”. Archival footage of King allows the late activist to talk us through his rise to prominence. Whatever is on the sealed tapes, there’s no quibbling with his charisma or his humanity. TB

Regina King’s film imagines that, on the night after Cassius Clay’s defeat of Sonny Liston, the fighter who was about to become Muhammad Ali gathers with Sam Cooke, Malcolm X and (apologies to US readers for a necessary clarification here) American footballer Jim Brown in a Florida hotel room. The performances are all excellent. The commentary on 1960s racial politics is gripping. But there is no escaping the script’s theatrical origins. Too many overly lengthy speeches are delivered to the back row of the balcony. DC

Weird, consistently unsuccessful study of David Bowie (Flynn, fine) at a crucial early stage in his career. It doesn’t help that the filmmakers had no access to the music. Encounters with variously frustrated rock journalists and radio hosts allow for less insight into Bowie than, say, his performance in The Man Who Fell to Earth some five years later. Exasperating viewing for fans and certain to baffle newcomers; it’s a curious thing, but who exactly is it for? TB