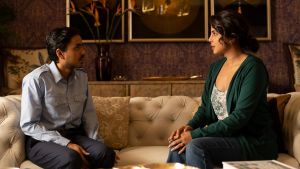 Having skewered America’s socio-economic divide in 99 Homes, Indian-American writer-director Ramin Bahrani takes on India’s caste system with this blistering crime thriller. As this slick adaptation of Aravind Adiga’s 2008 Booker Prize-winning novel opens, Balram (played by former popstar Adarsh Gourav) is a successful entrepreneur surrounded by what flashbacks reveal to be ill-gotten gains. Or are they?

There is something of Patricia Highsmith’s Ripley in Balram’s unethical ascent, as revealed in flashback, from a backwater village. There is equally a mirror held to India’s own economic acceleration. “I think we can agree that America is so yesterday,” Balram writes in an audacious introductory letter to the Chinese premier. “India and China are so tomorrow.”

For all Balram’s tricks, played variously against rival employees and employers, Gourav’s mischievous performance keeps you onside. Besides, his character is merely levelling a most uneven playing field. Long ago, he was a kindly young man with splendid academic prospects. His family’s poverty, however, demanded that Balram abandon school to break coal so that his family might fend off local landlord (Mahesh Manjrekar).

There is welcome overlap with Bong Joon-ho’s Parasite in the way that young Balram ingratiates himself with the landlord’s family, blagging his way into a chauffeur job, and latching on to the clan’s liberal son Ashok (Rajkummar Rao) who has recently returned from the US with his New York-raised wife Pinky (Priyanka Chopra).

With a nod to Daisy’s fatal carelessness in The Great Gatsby, Balram is not driving the car when a drunken Pinky hits a pedestrian in a poor part of the city. He, nonetheless, may have to take the fall.

The lively narration and rollicking pace make for favourable comparisons to Scorsese’s Goodfellas. The Bangalore backdrop and Indian social relations bring something unique to this frequently imitated (and seldom rivalled) crime movie template. Paolo Carnera’s camera has fun with dark corners and sickly neon. Adiga’s dark humour keeps abreast of the political commentary in a film that powers through its source material at breakneck speed.

And shout out to hair and makeup: Balram’s later moustache is a tuft that begs to be twirled.

On Netflix from Friday