And we have one to avoid at just about all costs (hint: it’s not The Rise of Skywalker) 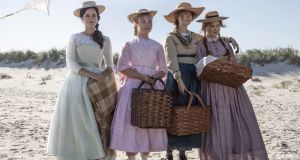 LITTLE WOMEN ★★★☆☆
Directed by Greta Gerwig. Starring Saoirse Ronan, Emma Watson, Florence Pugh, Eliza Scanlen, Laura Dern, Timothée Chalamet, Meryl Streep, Chris Cooper, Bob Odenkirk. PG cert, gen release, 135 min
Taking this glossy, flighty film on its own over-styled, over-wigged terms, it’s a fun, frolicsome affair. As Amy, the youngest and brattiest March, Pugh makes her character lovable and steals every scene she’s in, even going toe-to-toe with Streep (who brings a riff on her Florence Foster Jenkins). Ronan is a terrific, perennially breathless Jo. Chalamet’s Laurie bounces well off Ronan and Pugh (a blazing break-up row with the former is a highlight) but he fizzles with lesser screen partners. Dern is better than saintly Marmie deserves. Gerwig’s lightly metatextual script cleverly plays with chronology and Louisa May Alcott’s biography in ways that will require close attention from those unfamiliar with the literary source. This is a pleasing fairytale. But we’ve been prouder of our Little Women. Full review/trailer TB

“Anytime I saw her I knew I was in a dream again,” says the enigmatic hero of Bi Gan’s hypnotic, Delphian epic. The words are spoken over a fragmented lightshow and are as much as we can say for certain about this obtuse, spectacular drama. There’s more than a touch of mid-’90s Wong Kar-Wai dreaminess – so much green, so much neon – in the saturated colours and voiceover-driven story. Hongwu Luo is returning to rural Kaili for the funeral of his father. At home, he recalls the death of a childhood friend, Wildcat, and Wan Qiwen, a great lost love. She may be someone “who disappeared”. We’re told she shares her name with a movie star, but she may also be called Kaizhen. And suddenly it’s not that film at all, but a virtuoso imagined reboot of Luo’s past that unfolds as a continuous 59-minute shot. Forget the big brand space opera: here’s the season’s pre-eminent work of event cinema. TB

David (Schachter), a 25-year-old typesetter, has volunteered at the gay centre to be a buddy to an Aids patient. His first encounter with Robert (Edholm) is not a roaring success. The two men are very different. Robert is 32, fiercely political, fighting his fourth bout of pneumonia, and all alone. Shot on 16mm film in nine days in 1985, Buddies was the first and arguably still the best feature-length Aids drama, tender, angry, funny and urgent. A final shot of David as a lone protester with a handwritten sign outside the White House, set to the lush strings of the New York Salon Quartet, makes for a strangely hopeful spectacle, against bookending shots of a printer punching out a list of those who have died from Aids. Tragically, that roll-call would soon include writer, director and editor Arthur J Bressan and star Geoff Edholm. Full review TB

They say comedy = tragedy + time. A strange perversion of that formula underpins this gobsmacking portrait of Imelda Marcos, 33 years after protestors stormed Malacanang Palace and found 2,700 pairs of designer shoes belonging to the former dictator’s wife. A generation later she was back in the Philippines, running her son Bongbong for vice-president and strongman Rodrigo Duterte for president. The outrageousness is powered along by some $5 to $10 billion plundered by the US-backed regime, a sinister Google campaign, and historical ignorance. Schoolchildren interviewed speak of the good old days of martial law under Ferdinand and Imelda, a time defined by 3,257 known extrajudicial killings and 35,000 documented tortures. “When I see Manila, I feel so depressed and sad,” says Marcos, without a hint of irony. “Before, during my time, there were no beggars. I had a place for them”. A terrifying reminder that those with absolute power don’t make good retirees. Full review TB

Smith voices a suave spy who gets transplanted into the head of a pigeon in the latest ho-hum family film from Blue Sky Animation. Will as a confused bird is much more entertaining than Will as James Bond. For the larger part of the middle act, the film-makers have enormous fun with the dietary, social and scatological habits of the flying rat. The look is all second-hand Incredibles. The faces are those of the voice talent. But it’s funny enough. Full review DC

From the get-go, Cats struggles against ugly CG backdrops and odd framing. It never looks like a movie, nor do the unamusing insertions of dialogue into sung-through pieces ever sound like a movie. There are some convincing performances, especially Derulo’s rowdy Rum Tum Tugger and Hayward’s charming Victoria. Hudson gives Memory plenty of welly, even if she tends to emote in all the wrong places. But the “digital fur technology” is distracting and disturbing. Every time Cats settles into an avant-garde shape, an ear twitches or a tail flicks and you’re back thinking about how ghastly the actual cats look. Why do they have breasts but no nipples? Why do some have furry feet and others wear shoes? What kind of monstrous chimera are these? What we have here is feature technology that, to borrow an old Irish phrase, needs to be put beyond use. Full review TB