Review: Documentary is a terrifying reminder that those with absolute power never make good retirees 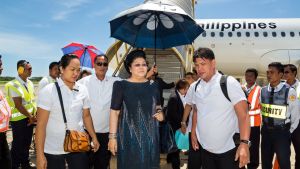 They say comedy is tragedy plus time. There’s a strange perversion of that formula underpinning Lauren Greenfield’s gobsmacking portrait of Imelda Marcos. Some 33 years have elapsed since protesters stormed Malacanang Palace in the Philippines, discovering more than 2,700 pairs of designer shoes belonging to the former dictator’s wife, all left behind in Imelda’s wardrobe.

Who on earth could have predicted that a generation later she’d be back on the rise in the Philippines – running her son Bongbong for vice president and her strongman Rodrigo Duterte (who might like to sleep with one eye open) for president? Or that the shoes would now be a jolly jape between Imelda and her supporters, as they gift her ornate footwear-themed pieces or cupcakes depicting stilettos?

The outrageousness of the project is powered along by some $5 billion to $10 billion dollars plundered by the US-backed regime, a sinister Google campaign, and historical ignorance. When Greenfield interviews primary schoolers they earnestly speak of the good old days of martial law under Ferdinand and Imelda Marcos, a time defined by 3,257 known extrajudicial killings, 35,000 documented tortures, scores of “disappeared” and 70,000 incarcerations.

If you weren’t concerned that the phrase “human rights” has been devalued by its deployment as a political weapon before now, hearing Imelda Marcos discuss Manila’s years of martial law as an unprecedented time for human rights and justice will sound an alarm.

Speaking on camera, surrounded by kitsch, self-aggrandising dynasty portraits, in a textbook case of “give ‘em enough rope”, Marcos fondly recalls the days when state funds were her own fortune to purchase giraffes, jewels, and blocks of Manhattan according to whim. The entire population of a coastal island was evacuated – 254 families – so that the Marcos family could import zebras and other African hoofstock for their own private safari.

Her Camelot allowed her access to world leaders across the political spectrum, from Col Muammar Gadafy, to Prince Charles, Fidel Castro to Ronald Reagan, Donald Trump to Sadam Hussein. She fancies herself quite the statesperson and claims that Mao told her: “Mrs Marcos, you have started the end of the Cold War.”

At 86, she’s still capable of skullduggery as the committee tasked with recovering money plundered from the state repeatedly discover. When they swoop in to recover a Michelangelo (!) and a Monet, they find the paintings have been replaced with framed photographs of Ferdinand. (The latter artwork was recently sold for $32 million by her secretary in New York.)

“When I see Manila, I feel so depressed and sad,” she says, without a hint of irony. “Before, during my time, there were no beggars. I had a place for them.”

You couldn’t make it up.

A terrifying reminder that those with absolute power don’t make good retirees.

Is it legal to record someone without their consent?