Jumanji: The Next Level – It’s ridiculous but never stops being good fun

Review: There’s killer apes and rogue Vikings, the Dannies DeVito and Glover and there’s The Rock 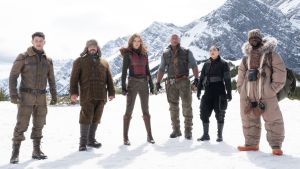 Film Title: Jumanji: The Next Level

The folk behind Jumanji: Welcome to the Jungle can never have anticipated the pressure they’d be under for any potential sequel. Everything about that film suggested notes jotted on a table napkin before entering a meeting titled: “What the hell to we schedule against The Last Jedi?” A few scribbles. Some arrows pointing in desperate directions. “Something from the 1980s? What was that Robin Williams yoke? Maybe make it a video game? THE ROCK!?!?!”

Becoming one of the highest-grossing films of 2017 – and one of Sony’s most profitable ever – Welcome to the Jungle proved, among other things, that there is room in the market for low-brow alternatives to Star Wars.

As The Rise of Skywalker approaches next week we are, thus, presented with a second spin-off from a 1993 film that, not much liked at the time, has somehow become a Proustian heart-tugger for younger Gen-Xers. You could write a book on what this strange (but not terrible) film tells us about the state of the entertainment industry. There’s a bit of Clinton-era America for young dad. The Dannies DeVito and Glover are here for older dad. The Rock is here for everyone. Oh, and did we mention that it’s a Christmas movie? It is just that – like Scrooge or Daddy’s Home 2.

First though, imagine approaching this with no prior knowledge. The Next Level introduces us to four inhumanly boring young people in some snowy part of the United States. It’s not worth saying much about them as, before the film has taken breath, they’ve been transformed into characters in a video game based on the Jumanji universe (the decrepit cartridge and console offers their own class of nostalgia).

It is worth celebrating the warm presence of the Dannies as Grumpy Old Men of the old school. The two pals, who fell out after closing their restaurant, find themselves squabbling while DeVito’s grandson makes an ill-advised investigation of the possessed game. They too are then propelled into the virtual world busy with killer apes and rogue Vikings.

The new film has a decent twist on its predecessor’s high-concept. The key gag was (keep up there) that the humans end up as heightened imaginary characters, some more glamorous than their real personae, some markedly less so. This time round, more dramatic mismatching has taken place. DeVito becomes The Rock. Glover becomes Kevin Hart. The everyday teenager (Morgan Turner) gets again transformed into a variation on Lara Croft played with great gusto by Karen Gillan.

The team don’t have quite so much fun here as they should. Dwayne Johnson is, perhaps, presented with too great a challenge as he struggles to locate inner DeVito within many metres of Rock. The amusing concept of the big man playing the tiny man is never anything more than that: a concept that fails to register on screen. Hart has a happier time teasing out that prissy version of Glover we see from time to time.

The melange of good ideas and half-good ideas fight against one another for more minutes than is strictly necessary. The pastiche of video-game tropes adds little new to a conversation that’s been going on for some 40 years. Yet, for all its weird compromises, Jumanji: The Next Level never stops being good fun. The sheer randomness of the exercise keeps you awake as might an evening spent at the wrong end of an army firing range. We’re at a seedy Himalayan bar. We’re skipping from rope bridge to rope bridge in a massive platform game. We’re being attacked by deranged mandrills. Oh look, it’s Awkwafina. She’s always welcome.

I’ve had a worse time during at least one recent Star Wars film.