Spies in Disguise: Will Smith is the voice in this ho-hum Bond parody

Review: It’s funny enough, but when our hero is turned into a pigeon, it really takes off 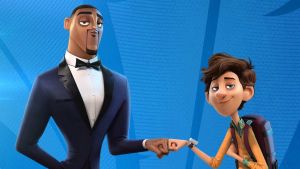 Lance Sterling, the film’s hero, is explicitly modelled on Will Smith, and Walter Beckett, chief sidekick, is delivered in the form of Tom Holland

There a reliable will-this-do quality to the animated features from Blue Sky Studios – the folk behind the Ice Age films – that promises efficiency without originality, slickness without soul, entertainment without resonance. We damn with the faintest of praise when we confirm that Spies in Disguise is an archetypal example of its ho-hum genre. It’s funny enough. It has its exciting moments. Will this do?

It is the current fashion to plaster voice talent for animated films on bus ads and list their names in the opening credits. This makes more sense here than is usually the case as Lance Sterling, the film’s hero, is explicitly modelled on Will Smith (slim, African-American, neat beard), and Walter Beckett, chief sidekick, is delivered in the form of Tom Holland (fresh-faced, rich brown hair). These films really don’t celebrate the potential of the medium, do they? You can make anything you want of the characters and you choose to just shape them from the men standing behind the microphone.

The pre-credit sequence promises no more ambition. It’s yet another James Bond parody. Dressed in a dinner jacket (because that is still the uniform in those films), Lance mucks up an encounter with a supervillain and is given a dressing-down. It’s Licence to Kill with less cartoonish villains.

The action picks up considerably when Lance enlists the help of plucky boffin Walter. Following an implausible misunderstanding involving mysterious fluids, our hero gets transformed into a pigeon. Now we’re talking. Smith as confused bird is much more entertaining than Smith as Smith as James Bond. For the larger part of the middle act, the filmmakers have enormous fun – and so do we – with the dietary, social and scatological habits of the flying rat. Lance’s new pals are an amorous lady pigeon and a scuzzy scavenger caked with discarded food and his own unlovely effusions.

The look of the surrounding film is second-hand Incredibles – and thus fourth-hand 1960s espionage chic: tight-fitting jumpsuits, neat suits, Mary Quant hair. The claw-handed villain is so lazily drawn he slips from the brain while still occupying the screen. But the pigeon stuff is funny enough to keep kids diverted and parents awake. Those that do remain conscious will be amused to note that Walter’s late mum is named “Wendy Beckett”. The late nun displayed a decent sense of humour on her art history broadcasts and would almost certainly accept the tribute (if that’s what it is) with good grace.