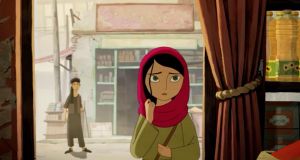 THE BREADWINNER ★★★★
Directed by Norah Twomey. Voices of Saara Chaudry, Soma Chhaya, Laara Sadiq, Shaista Latif, Ali Badshah, Kawa Ada. 12A cert, general release, 93 min
The latest from Kilkenny’s Cartoon Saloon concerns a girl in Taliban-controlled Kabul who is forced to dress as a boy to support her family. If the previous Cartoon Saloon features, Song of the Sea and The Secret of Kells, had a flaw, it was a lack of discipline in their narrative structure. Despite its frequent diversions into high fantasy, The Breadwinner has greater momentum and a more secure story arc. As ever, the visuals are gorgeous. Full review DC

This arid-dry comedy of disappointment starts as it means to go on. Don Diego de Zama (Cacho), an 18th-century magistrate in the employ of the Spanish crown, poses heroically in his tricorder hat on a far-flung Argentine shore, before retreating into the rocks so that he might spy on some local women having a mud bath. It’s impossible not to think of Stanley Kubrick’s similarly epic (and capriciously fated) Barry Lyndon, but the strangeness and Beckettian frustrations of the halting drama make for a uniquely bleak experience. TB

The titular heroine, played with plenty of sass by Hancock, has been a long-term carer to her ill husband. Their marriage, we learn, was not a happy one and his death is a cause for her to lament many “wasted years”. She packs a bag and heads to Scottish Highlands in an attempt the reach the summit of Suilven Mountain. There she reluctantly befriends unfailingly helpful local guide (Guthrie). But even with assistance, will the climb prove too much for the octogenarian? A grittier take on the grey pound movie. TB

By any reasoning, O’Sullivan’s hybrid portrait of the art collector and gallery founder Hugh Lane simply shouldn’t work. The film’s marriage – or rather menage – of talking heads, artistic flâneurism and historical recreation ought to make for a screaming match, or at the very least uneasy transitions. But working from Mark O’Halloran’s fiendishly clever script, the December Bride director and dexterous editor Mick Mahon have fashioned a project as elegant as its subject. Full review TB

Deadpool is rescued by the X-Men after falling into suicidal despair. He blows his chance (obviously) during an encounter with a young mutant. Depending on your appetites, the constant self-reference is either a shameful cheat or a release from the superhero sameness. It’s probably a bit of both and Reynolds’s relish is, for the most part, passed on to the audience. This time round they’ve toned down the recreational sexism. Maybe that’s why it feels less grating. Full review/trailer DC