Review: Evan Rachel Wood flip-flops between victim and victimiser in this study of abuse of power 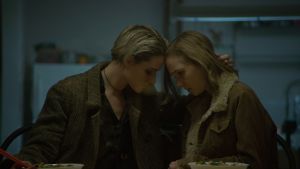 “You’re no good to me if you can’t get hard!” snaps Laura (Evan Rachel Wood) at the doughy blindfolded man in her dingy hotel room. When he does manage to comply, her rough-housing sex – replete with strangulation – sends him fleeing.

Laura’s father (Denis O’Hare) warns her about making new sexual conquests at his cleaning firm. Their pained conversation hints at an unsettling, predatory history. It does not take Laura long to find a new mark.

Eva (Julia Sarah Stone), is a naive 16-year-old piano prodigy with an overbearing, micro-managing mother (Maxim Roy).The waifish teenager, upset by her mother’s plans to move them in with her new boyfriend, is more than flattered when Laura pays her attention.

It requires only a few compliments, a couple of shared joints and some vodka for Laura to inveigle her way into the youngster’s affections.

As much as we would like for Evan Rachel Wood to maybe take a break from rapier material, Allure once again excavates sexual trauma to darkly fascinating and meaningful effect.

The steely Wood, who has testified before Congress in unsparing detail about her experiences of sexual violence, has, in recent years, been a rape survivor in both TV’s Westworld and Into the Forest. It cannot be accidental that Allure, in common with these other projects, entirely de-sexualises rape. There is no sense of objectification here, only the abuse of power.

Wood’s naturalism often evokes Kirsten Stewart, without the latter’s endearingly halting delivery. Here, in her most outstandingly committed performance to date, she flip-flops between raging and cooing, self-harm and harm to others, victim and victimiser. Every word and every deed is an act of emotional terrorism.

Wood gets some great sparring partners in veteran Canadian actor Denis O’Hare and The Killing’s Julia Sarah Stone. Film-makers Carlos and Jason Sanchez are best known for their dramatic large scale photography. Their debut feature is similarly sized and impactful.