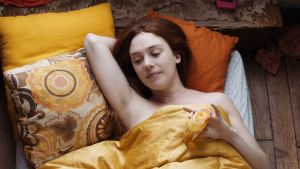 Free-flowing drama is tricky to pull off. Too often, the term is a polite euphemism for incoherence. Shapelessness, however, is the only shape that befits Paula (the remarkable Laetitia Dosch), the rudderless, ridiculous, rapturous 31-year-old heroine of this wonderful, kinetic film.

This femme isn’t all that jeune. In fact, she’s old enough to have been traded in for a younger model. A vexing, violent opening sequence sees Paula pounding at the door of her older ex-lover, first with his fists and then with her head. Cut to hospital where she is treated for her wounds while gabbing furiously about her romantic predicament. Cut to a party. Cut to the streets. She makes enemies fast, and friends faster.

She has no money. She has no place to stay. She does, however, have her former lover’s cat.

The catnapping isn’t quite as demented as it first appears. There’s a dysfunctional and possibly abusive domestic history lurking in the small details. Joachim (Gregoire Monsaingeon) was her college lecturer when they met. He became famous for an early photograph of her. Their 10-year relationship cut Paula off from her mother and left her entirely ill-equipped for normal human interactions. Tellingly, every time she stops calling him, he starts calling her.

Mostly, she tears around Paris like a whirlwind, finally finding a job selling underwear at a department store and a home as a live-in nanny to six-year-old Lila (Lilas Gilberti-Poisot).

Inevitably, the girl is rather more grown up than her minder. Every silly, sometimes well-intentioned act threatens to pull the rug from under Paula’s precarious arrangements. Lila’s strict diet is now supplemented by candyfloss and sweets. Paula pretends to play a wind instrument – a family heirloom – just as her stern employer walks through the door.

The cringe is strong with this one.

For all the oscillation and craziness, there’s some sense of personal growth. Her employment is entry level at best, but she’s hanging in there. Paula’s romance with Ousmane, a wildly overqualified security guard (Souleymane Seye Ndiaye), is impulsive, but healthier than her last relationship. “You know what you remind me of?” Ousame asks her. “A little wild monkey.”