The Breadwinner: Another winning tale from Cartoon Saloon

Review: The animation is gorgeous in this Oscar-nominated feature about a young woman supporting her family under the Taliban in Kabul, but the real magic is in the storytelling 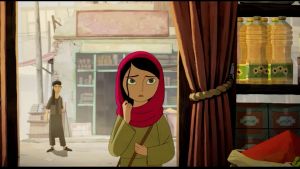 The third Oscar-nominated feature from Kilkenny’s Cartoon Saloon (we’re almost getting blase about this) works up an intriguing tension by approaching the purpose of storytelling from two different directions. The film’s framing narrative, adapted from a novel by Deborah Ellis, goes deep into the experiences of a young woman growing up under the Taliban in Kabul. Most of us have some idea how aggressively that ruthless theocracy pressed its thumb upon women and girls. A live-action version of the story would be tough going, but Nora Twomey, an experienced Cartoon Saloon hand making her solo debut as director, works that ugly history into a pleasing animation that, without sugar-coating, educates, proselytises and entertains. It would be damning with the least appetising sort of praise to suggest that the film demands to be shown in schools. But we say it anyway.

The Breadwinner does something else. A fantastical myth, woven through the propulsive main story, serves as a distraction to the characters in their most distressed moments. Story as lesson. Story as history. Also, story as entertainment. Story as escape. There’s a great deal packed into this boldly composed feature.

Parvana (voiced by Saara Chaudry), a young girl from Kabul, spends her days flogging anything saleable in the streets with her disabled dad Nurullah. Injured in the war with the Soviets, Nurullah is arrested after a misunderstanding with a young Taliban firebrand, and Parvana, whose brother has died years earlier, finds herself compelled to support the family. But girls are barely permitted to leave their homes. A solution announces itself. Our heroine dresses as a boy, identifies herself as her own cousin and starts to accumulate useful little jobs.

When not risking her life in the unfriendly streets, she entertains her young brother Zaki with the story of a man seeking to recover vital seeds from the possession of a sinister Elephant King. Hence the escapism.

If the previous Cartoon Saloon features, Song of the Sea and The Secret of Kells, had a flaw, it was a lack of discipline in their narrative structure. Despite its frequent diversions into high fantasy, The Breadwinner has greater momentum and a more secure story arc. We know we are inexorably heading towards the prison where Nurullah is held.

The animation has always been gorgeous in the studio’s films, and that is again the case here. There is, however, a greater sense of restraint to those visuals. The main story is told in muted, flat shades – intercut with “pillow shots” of phone wires and ragged roofs – that allow the story to unfold in uncluttered, lucid fashion. The Elephant King yarn is cleverly rendered in the style of stop-motion cut-outs that edge us towards whimsy and fantasy. In these fashions, the visual aesthetic neatly echoes the narrative purpose.

These days, western film-makers tackling such stories can get grief for indulging in cultural appropriation. There is nothing the team behind The Breadwinner, which includes producer Angelina Jolie, can do about their own racial origins, but their sincerity of purpose and sympathy for the misused cannot be questioned. Mychael Danna and Jeff Danna – the former an Oscar-winner for Life of Pi – add to the richness of the package with an evocative score that draws influences from the region.

The Breadwinner may suffer from the suspicion that it looks “good for you”. It is certainly morally sound and socially responsible. But it also remembers to have fun. Stories really do serve many purposes.

The Guyliner: Rebecca is my favourite novel, so why do I hate everyone in it?
8

Poem of the week: Aubade, by Amanda Bell
10