New this week: Battle of the Sexes is the feminist v male chauvinist pig showdown we need right now 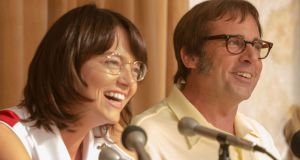 Hugely entertaining, impressively compassionate attempt to dramatise the 1973 tennis match between Billie Jean King (Stone), legendary champ, and arch self-publicist Bobby Riggs (Carell). Carell hams with abandon as a chancer constantly surveying the horizon for his next mark or hair-brained scheme. Stone brings out the gentleness in a famously tough competitor. At 121 minutes, Battle of the Sexes occasionally drags, but it’s the Feminist V Male Chauvinist Pig showdown that we need right now. TB

Charismatic Londoner Dickinson breaks through with this tale of growing up gay (and not quite knowing it) in Coney Island. “I don’t really know what I like,” he says to an online correspondent. “I don’t really think of myself as gay,” he says later to a male lover. We think differently. The film offers an impressive, hazy depiction of the run-down Brooklyn locale as it follows our hero towards a crisis. Beautifully shot. Psychologically subtle. DC

Moving, elegantly acted drama concerning the relationship between a young man (Bell) and the middle-aged movie star Gloria Grahame (Bening) in Liverpool during the late 1970s. Material that could easily have been mined as odd couple or culture clash comedy is instead delicately rendered by Matt Greenhalgh’s screenplay. Film Stars Don’t Die in Liverpool repeatedly stresses the commonality between the two working actors. A film that earns its epic title and the lush Elvis Costello ballad over the final credits. Review TB

Plaza plays a mentally unstable young woman who becomes obsessed with an instagram star (Olsen). Part King of Comedy, part Single White Female, Ingrid Goes West gleefully despises online fame and the hideous cult of the “influencer”. This comedy needed to be made. It has its flaws, but it’s better than we had a right to expect. The cultural references are perfectly judged. The intellectual vacuum sends echoes all along Venice Beach (where else?). LMFAO! DC

Paddington is fond of quoting his Aunt Lucy. “If you are kind and polite,” he reminds himself and others throughout this lovely, lovely sequel, “everything will come right”. It’s a mantra that holds the bear in good stead when he is framed for the theft of an antique pop-up book and, ultimately, sent down. Hugh Grant preens and puffs magnificently. Brendan Gleeson scowls and softens with similar aplomb. Both look to be having an absolute ball. As are we all. Review TB